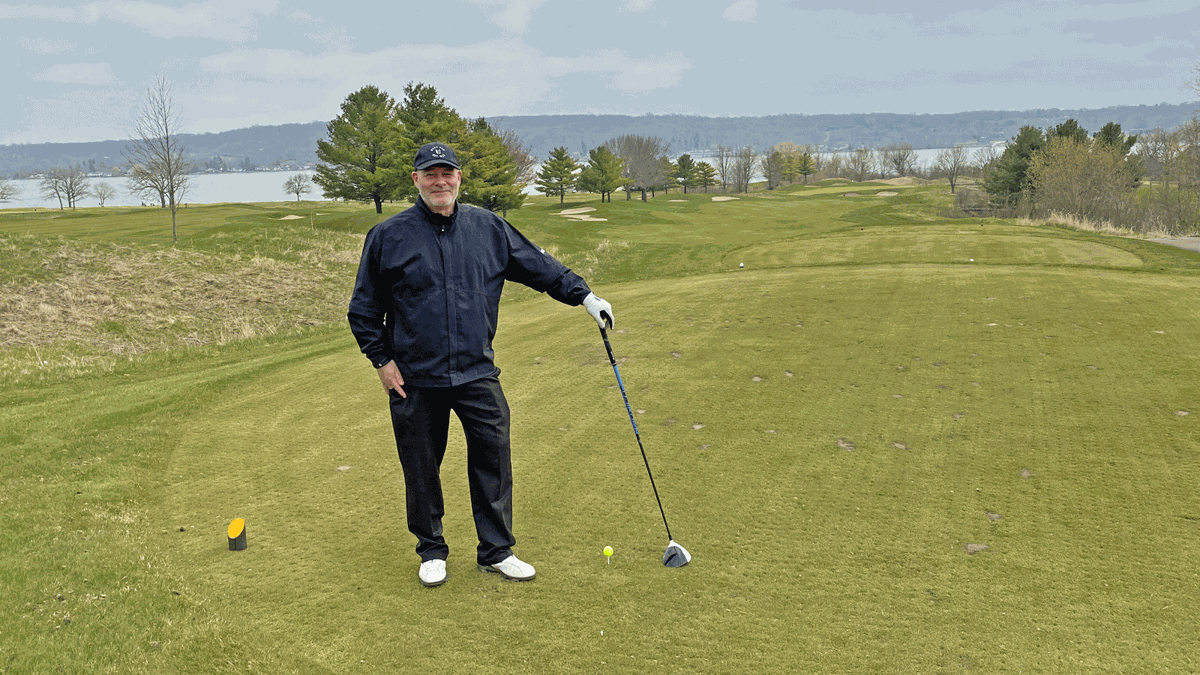 On the first tee on the Player Course at Geneva National: Gary D'Amato for his second 18 of the day Friday. 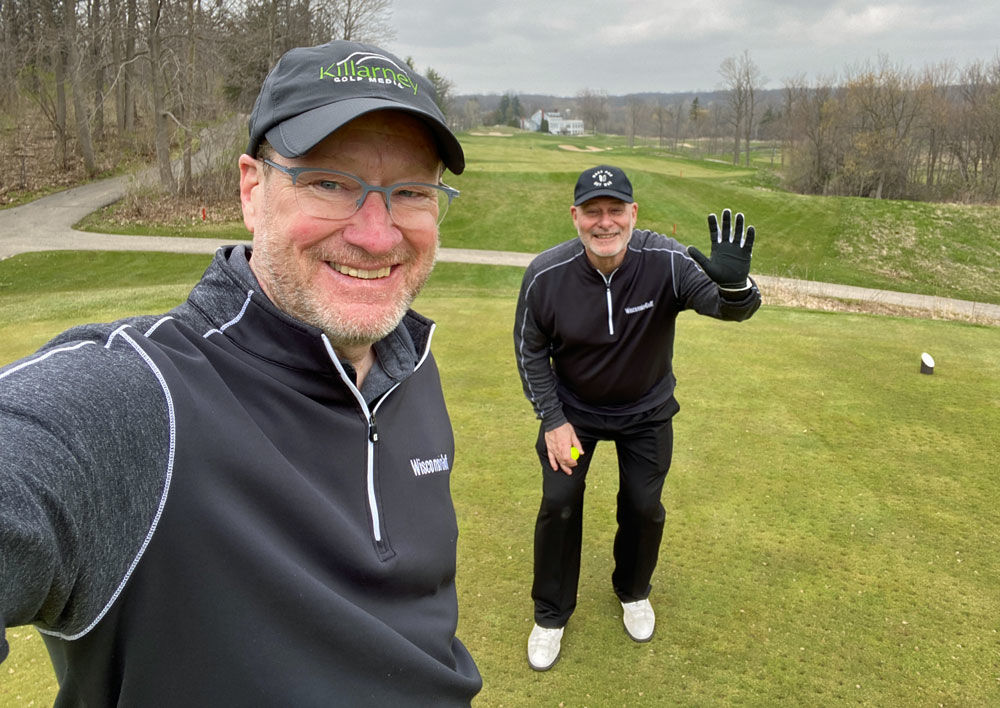 Social distancing? No problem for Gary D'Amato and one of his playing partners, Mike Davis, on the tee at the Player Course at Geneva National. 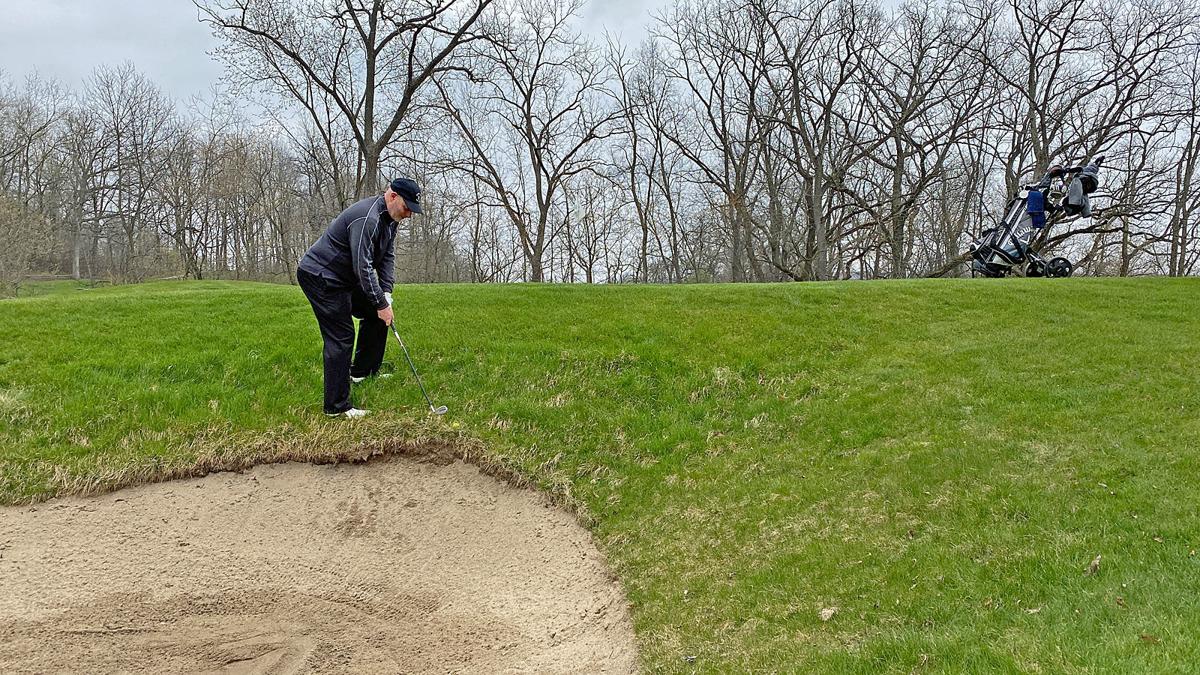 It wasn't just walking 32,145 steps, it was walking them up and down hills and into precarious spots like this one at Grand Geneva.

Day 2 of golf in the Coronavirus Age in Wisconsin: Ow.

This morning, I feel like I ran a marathon, hiked the Appalachian Trail, was a tackling dummy at Packers practice and went 12 rounds with Tyson Fury. Other than the ice pick stabbing my back and hips, the machete swiping at my hamstrings and the hot coals burning my feet, I feel great.

Judging by the parking lots at both resorts, misery loves company. Friday was the equivalent of a holiday for golfers, the first day golf was allowed statewide per Gov. Tony Evers’ amended safer-at-home order. The Brute at Grand Geneva and the Trevino and Palmer courses at Geneva National were booked solid and the Highlands and Player were busy, even though the forecast called for rain (which never came).

This was merely a precursor for Sunday, when Brown said the tee sheets for all three courses were filled from first tee time to last. Even at 15-minute intervals between foursomes, he was expecting 600 golfers. If that’s not an all-time record for a state golf facility in April, I’d be shocked.

Keep in mind, that’s 600 golfers walking on courses that were built with motorized carts in mind. The distances between greens and tees on the Player in several cases are greater than 1,000 yards. It’s a quarter-mile walk to the first tee on both the Trevino and Palmer, and a half-mile walk from the 18th green on the Trevino back to the clubhouse.

I can’t help but think that equates to roughly $15,000 in lost cart revenue on Sunday alone, probably another one-day record. But who’s complaining? Not the courses, which finally get to open, albeit under a strict set of guidelines. Any revenue at this point is better than nothing.

And I can’t imagine many golfers are whining about having to hoof it, until – like me – they wake up the next morning with joints that have been set in concrete.

Was it worth it? You’d better believe it. Golfers normally are notorious complainers about everything: slow greens, slow play, cart-path only, where’s the marshal? where’s the bev cart? But I saw nothing but smiles Friday. It was as if we’d all been liberated from the dark caves our houses have become.

Not only did I feel perfectly safe, but after the first hole the words “social distancing” didn’t even enter my mind. It was just instinctive. We had pull-carts, we walked separately to our golf balls and we never got close to one another on the greens or tees. Honestly, it was no different than going for a walk.

The only time I even thought about COVID-19 was when someone in the group ahead of ours left a headcover in the middle of the fairway. I was about to pick it up when my friend, Kevin Markley, said, “You’d better use your glove hand.”

The Highlands and Player were in terrific shape, the fairway turf just about perfect and the greens rolling better than they normally do in April. For once, we’ve had a relatively mild spring and the conditioning at this point is ahead of the curve.

I preferred the former because it felt more natural. A couple times on the Player, the ball glanced off the side of the cup and we counted it as a made putt, though they likely would have been lip-outs.

The hardest thing about playing 36 holes? With the clubhouses closed, that’s nine hours without a bathroom break. Thank goodness I have an iron bladder.

The rest of me? It only hurts when I smile.