Some outdoor activities will go on in Wisconsin over the next 30 days.

Golf is not among them.

Golf courses statewide were to close Wednesday to comply with the "Safer at Home" order that Gov. Tony Evers signed Tuesday morning. Because the order is in effect for 30 days, the earliest golfers will be able to tee it up in Wisconsin is April 24, unless the order is lifted early.

Evers ordered the closure of businesses and gathering places that aren’t considered essential to try to slow the spread of coronavirus, which can cause serious respiratory illness and has no cure.

Outdoor activities such as walking, biking, hiking and running are allowed, but the order did not specify golf, other than that “country clubs” must close. The Wisconsin State Golf Association, Wisconsin PGA Section and Golf Course Owners of Wisconsin all sought clarification Tuesday. 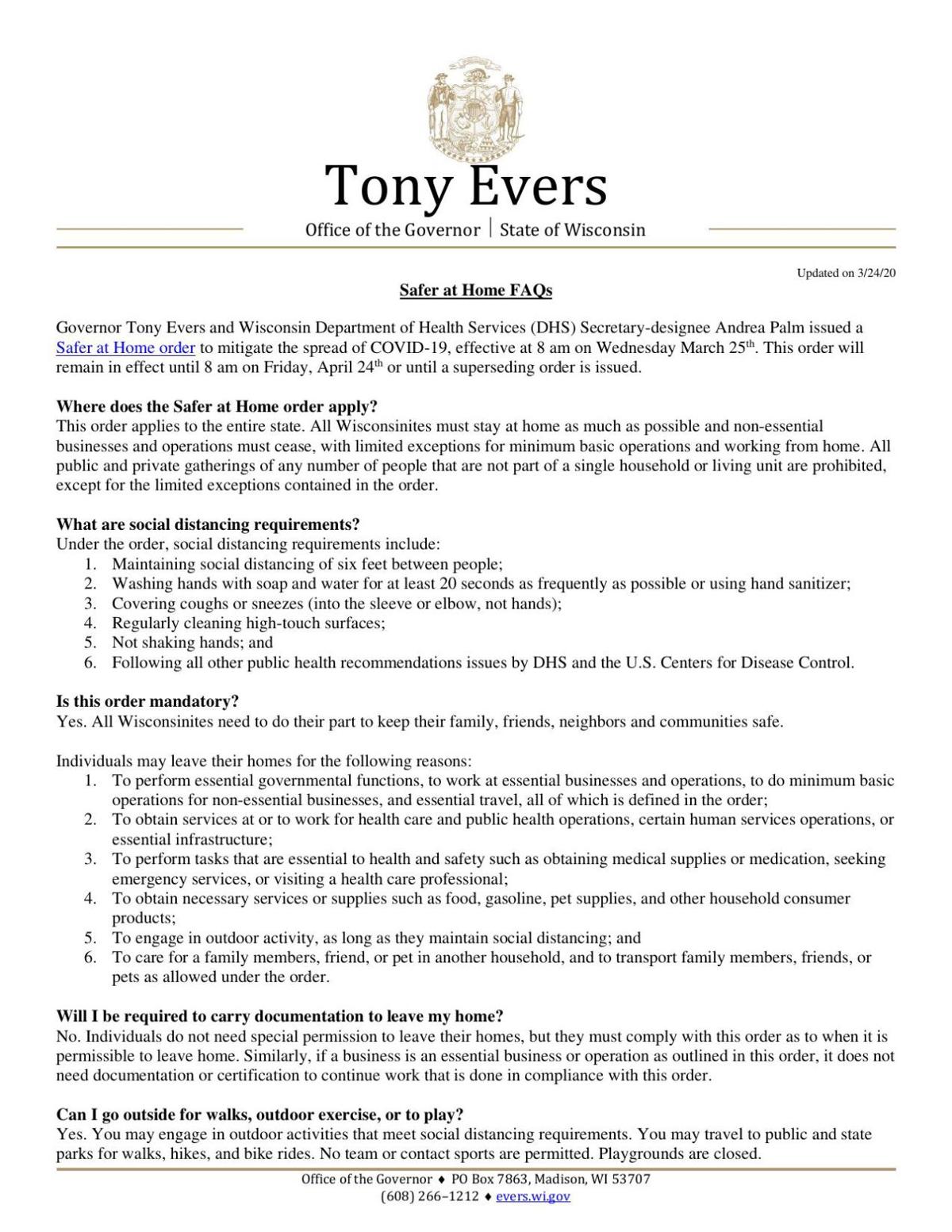 In an email sent to 125 member courses, GCOW executive director Jeff Schwister wrote, “As of 5 p.m. on March 24, since we are yet to receive clarification from Madison on the status of golf courses in the new ‘Safer at Home’ Order, we have been suggested that we list our courses’ status as ‘Owner Decision Until Clarification.’ This has also been the recommendation of a local State Representative I have talked to.”

In a list of FAQs updated by Evers later Tuesday, however, he addressed golf and removed any ambiguity about the order: “Golf courses are not considered essential businesses. Staff can perform minimum basic operations as defined in the order.”

Some courses in the southern half of the state had opened and many more would be following in the coming days and weeks. Destinations such as Whistling Straits in Haven, SentryWorld in Stevens Point and Sand Valley Resort in Adams County were not scheduled to open until after April 24.

“Actually, (Thursday) morning we sent out an e-blast to our database saying we are still planning to open May 4 but we are very much aware of the situation and how quickly the situation is developing,” said John Morrissett, the competitions and marketing director at Erin Hills. “If it becomes necessary to push back that date, we will do so and let people know at that time.”

The Trevino Course at Geneva National Golf Club opened Monday and 40 golfers took advantage of temperatures in the low 40s to play. But it was open for only two days before being forced to close.

D'Amato: Rarely has a round of golf in March felt so good

Naga-Waukee War Memorial Golf Course in Pewaukee, a Waukesha County-owned course, did a brisk business Tuesday and had a full tee sheet Wednesday, when temperatures were forecast to reach the mid-50s.

The WPGA previously announced that it would postpone its four member tournaments in April. Joe Stadler, executive director of the WPGA, said one or all of the tournaments could be canceled entirely, depending on how the schedule is further impacted by COVID-19.

Schwister wondered what to do about the Platinum Passport, a $369 product GCOW has sold that gives golfers access to 63 courses and 114 free rounds of golf in 2020.

In Delaware, Kentucky, Ohio and Oregon, courses have been allowed to remain open as long as they practice safety guidelines established by the Centers for Disease Control, such as social distancing, increased time between starts, sanitizing common areas and removing items such as benches, ball washers and bunker rakes.

Most of Nevada’s courses remain open, following Gov. Steve Sisolak’s clarification that “outdoor activities outside of clubhouses” can continue during the shutdown of nonessential businesses.

But according to golfadvisor.com, more than 1,200 courses in the U.S. had suspended operations as of Tuesday. Two prominent resorts on the west coast, Bandon Dunes in Oregon and Pebble Beach in California, have suspended hotel and golf operations.

Myrtle Beach, a popular spring destination with more than 100 courses, stands to be hit especially hard. The Myrtle Beach Sun News reported that courses have stayed open, but are dealing with numerous cancellations.