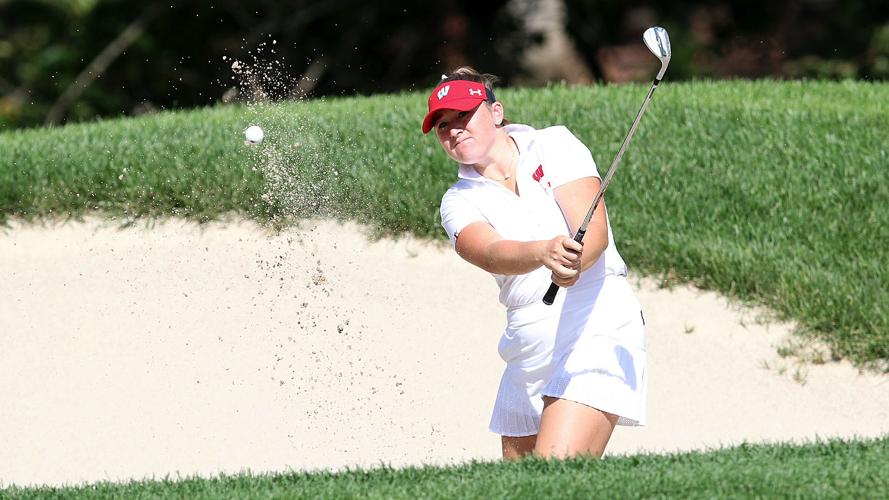 Wisconsin’s Emily Lauterbach hits out of a bunker on the par-3 12th hole during action on Tuesday at the East-West Match Play Championship. 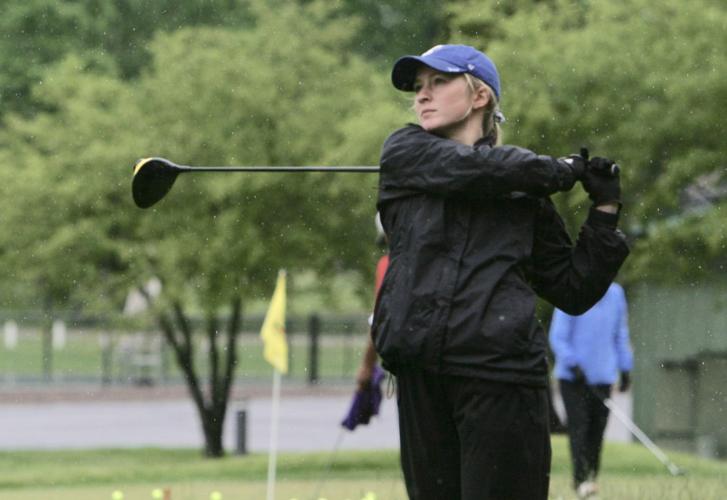 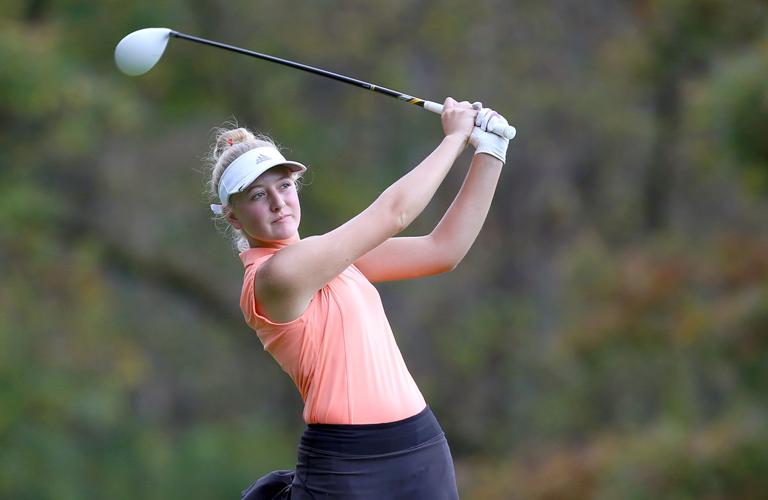 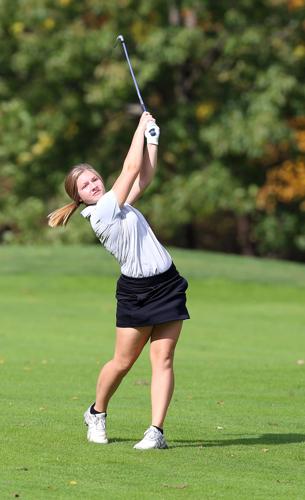 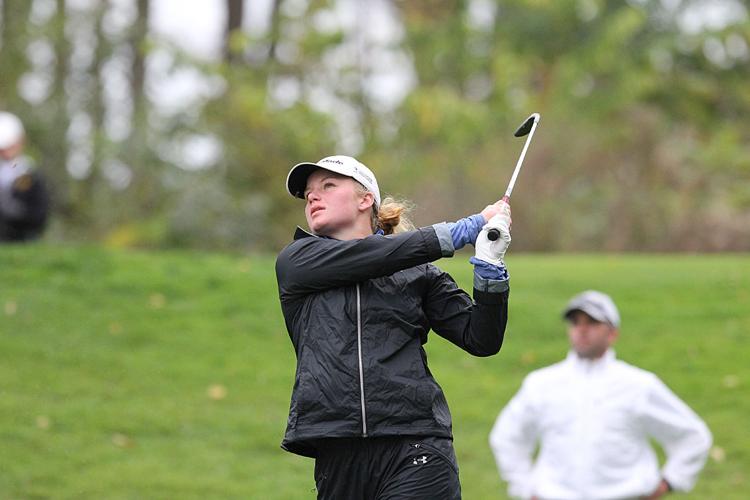 Emily Lauterbach has not only been the best golfer in her class among those from Wisconsin since reaching the high school level in 2015, but the Hartland Arrowhead graduate has also been the first to reach major milestones.

Lauterbach, one of only three golfers in Wisconsin.golf's Class of 2019 top 50 to play golf at the NCAA Division I level, made the quickest transition in the biggest way as a freshman at UW. She shot 74 in the first round of her first tournament — The Glass City Invitational at Inverness Club in Toledo, scene of four U.S. Opens as well as two PGA Championships and set to host to 2021 Solheim Cup — and was the Badgers' top finisher (tied for 19th place).

The finish was one of two top-20 showings for Lauterbach in her first four events at the collegiate level. Her 75.09 average coming out of the fall ranked her third among UW golfers behind senior Tess Hackworthy and sophomore Tracy Lee, who had matching 74.69 averages, among those who played at least five rounds this fall. Her second-round 69 at the Illinois Invitational at Medinah was one of just two sub-70 scores shot by a UW golfer this fall.

Retiring her as the No. 1 golfer was the easy part in our ode to Wisconsin's class of 2019 girls golfers. Ranking the 49 golfers behind her using our matrix that combines performance coming out of their senior years in high school with their impact on their teams as college freshmen was quite difficult.

More than one third of our top 50 in July chose not to play college golf. Many chose to follow challenging academic paths at larger schools over juggling school and golf for four more years at NCAA Division II and III schools.

Still, many golfers in this class beyond Lauterbach made their presence felt during the first semester of their freshmen campaigns. In fact, seven of our updated top 10 played each round of every tournament their teams played this fall.

No. 2 Gabby Tremblay of Hayward by way of Shattuck St. Mary's (Minn.), who turned heads with her seventh-place finish at the Wisconsin State Women's Open in June, found herself a home in the lineup at Division I Creighton University. She broke 80 in nine of the 11 rounds she played and her average of 77.9 ranked second on a team looking to better its fifth-place 2018-19 showing in the six-team Big East Conference.

Veenendall's 78.38 average ranked second on the team for the Cougars, who won one event and finished second in two others this fall. After finishing tied for fourth in Sioux Falls' first event as an individual competitor, she moved into the top five and broke 80 in five of her eight rounds in all with a low of 75 at the Central Region Fall Preview.

Brown was a birdie machine for St. Catherine's, breaking 80 in eight of her 11 rounds with a low of 72 at the Wartburg Fall Invitational in Waverly, Iowa. She shot rounds of 79-76-77 at the Minnesota Intercollegiate Athletic Conference Championship and placed fourth as her Wildcast finished second by two shots.

No. 5 Annie Balduzzi lost her spot in the top five at Sioux Falls to Veenendall after an 85-78 start to her college career at the Central Region Fall Preview. She bounced back to tie for sixth at the Golden Bear Classic on rounds of 81 and a season-low 75 and then tied for 22nd at the Augustana (S.D.) Invite.

Eau Claire Memorial's Lexy Meade, who leads the second five in our ranking, only got two starts in her first semester at Division I Drake (Iowa). She shot 83-87 at the Creighton Classic and finished tied for 26th out of 34 golfers.

As expected, the Class of 2019 became the latest to make a profound impact at the Division III level.

Former Monona Grove golfer Klaire O'Reilly-Dye made the jump from No. 17 to No. 7 by combining an efficient, repeatable swing with tweaks from eight-time Wisconsin Intercollegiate Athletic Conference coach-of-the-year Howie Samb at UW-Stout to average 82.42 in 12 starts for the Blue Devils, earning "Newcomer-of-the-Year" honors in the conference after shooting 82-82-78 and finishing alone in 12th place at the WIAC Championship in Reedsburg.

She and No. 8 Kendra Swanson of Beaver Dam give Samb, who graduates four seniors after this season, a solid 1-2 punch going forward. Likewise, Kirsten Leonardi of Sussex Hamilton and Sophia Dooman of Janesvlle Parker, who share the No. 10 spot in our rankings, proved valuable at the back end of the lineup at St. Thomas (Minn.), averaging 83.9 and 84, respectively.

In between, No. 9 Aubrie Torhorst of Union Grove helped keep Grinnell (Iowa) competitive despite the graduation losses of sisters Vidushi and Vrishali Sinha of India. Torhorst played all five tournaments for the Pioneers and averaged an 82.4 (fourth on the team) with an 80, an 81, two 82s, four 83s and an 85.

Only eight of the next 15 golfers in our final Class of 2019 ranking competed for a college this fall. However, several — like Torhorst, who moved from No. 22 to No. 9 — made significant jumps since our July ranking update.

Menomonee Falls' Isabella Dory vaulted from No. 33 to No. 11 and Orfordville Parkview's Madi Vine leaped from No. 24 to No. 16 playing Division II golf at Concordia-St. Paul (Minn.) and Missouri Western, respectively. Kaukauna's Emma Moore moved from No. 34 to No. 24 after a solid fall at UW-La Crosse.

This is the last time such improvement will be measured by Wisconsin.golf. But that doesn't mean those golfers can't find other measuring sticks to see for themselves how competing against better golfers during the summer — the Wisconsin Women's State Open, Wisconsin Women's State Amateur and Badger Mutual Insurance Women's Amateur should be musts for every active golfer on this list each of the next three summers — can help them become the better golfers when they return to their respective campuses in the fall.