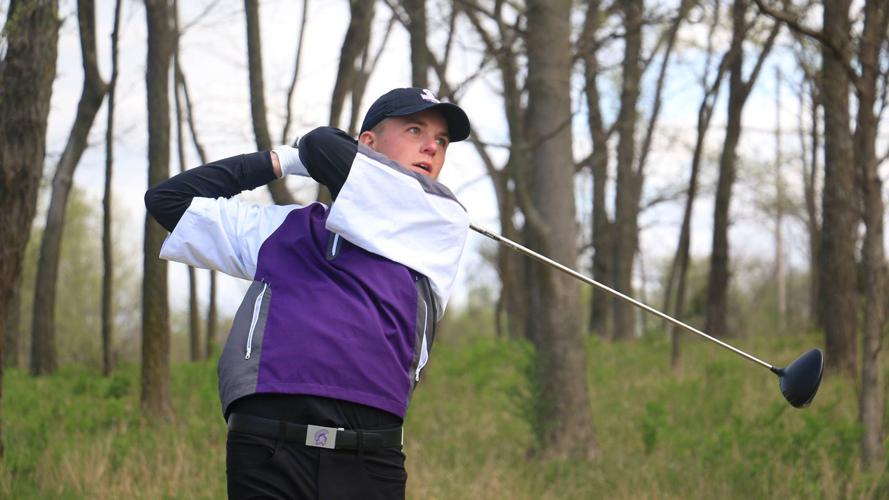 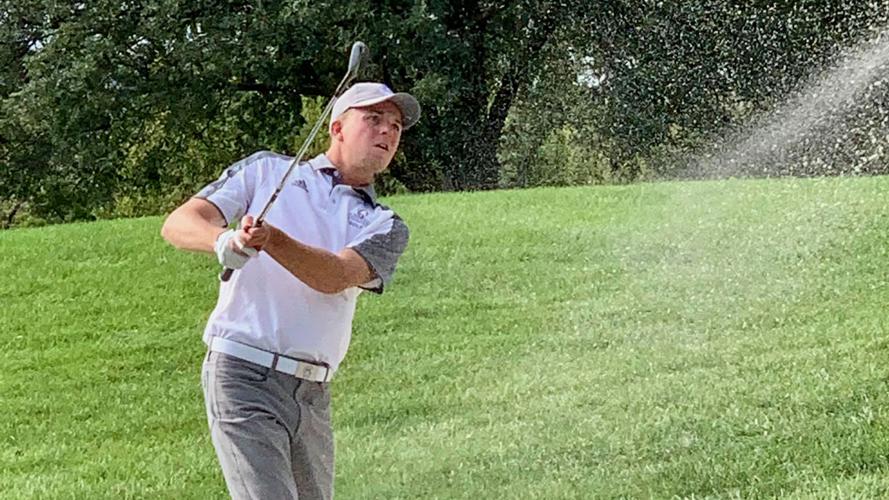 Tyler Beeck was the No. 2 golfer at Winona State and ranked 54th in the latest GolfStat.com Division II individual rankings. 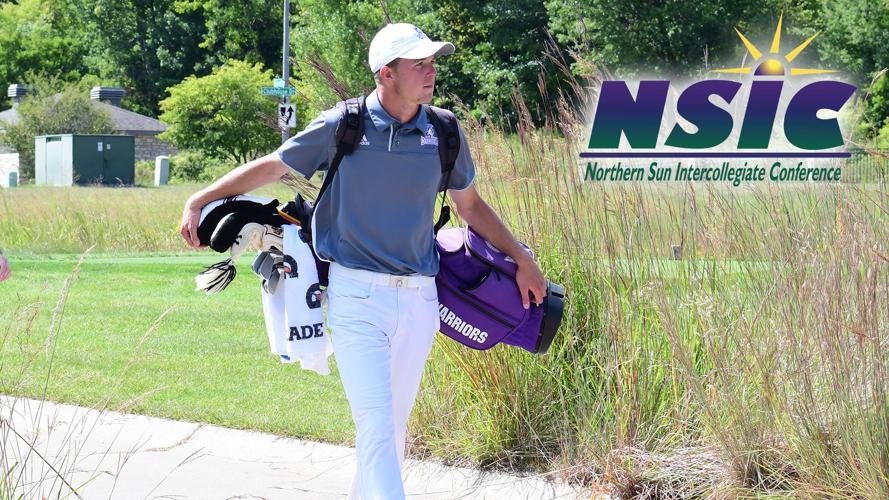 Tyler Beeck was second in the Northern Sun Intercollegiate Athletic Conference with a 72.2 scoring average. 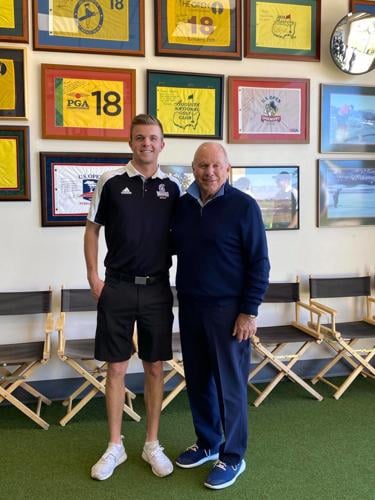 There was something fitting about Tyler Beeck being in Las Vegas when he received the news that immediately closed one door to his college golf career and eventually opened another.

One month later, the Sheboygan Falls native believes he has hit the jackpot with the opportunity to transfer from NCAA Division II Winona (Minn.) State to Division I Charleston Southern to use the additional year of eligibility the NCAA has granted him and other spring sports athletes whose 2020 seasons were canceled by the COVID-19 pandemic.

Tyler Beeck was the No. 2 golfer at Winona State and ranked 54th in the latest GolfStat.com Division II individual rankings.

Not only will he get to play one more season of college golf, Beeck will also be able to pursue a 17-month Master of Business Administration degree there that wasn’t available to him at Winona State.

“I’m pretty thankful to get that kind of opportunity,” said Beeck, who chose Charleston Southern over interest from Division I Valparaiso and Division II Rollins and Missouri Western and is the first college golfer with Wisconsin ties to make known his intention to transfer schools using the NCAA eligibility extension.

“I went into the (NCAA) transfer portal and … started getting interest from a lot of different schools all over the United States. It was interesting to me to … pursue a couple of those schools, talk to the coaches and see what they had to say about me pursuing an MBA while playing one more year. For me, it was a good fit at Charleston Southern.”

Beeck, the Warriors’ No. 2 golfer and ranked 54th in the latest GolfStat.com Division II individual rankings, is one of two Winona State golfers for whom the NCAA extension was a motivator in transferring to Division I programs. The team's No. 1 golfer, Brady Madsen, a junior from Raymond, Minn., who is ranked 21st nationally, is headed to Florida Gulf Coast University. Warriors coach Jeff Straight said Isaac Westlake, a senior who played six rounds as the team’s No. 6 golfer this past season, is also in the transfer portal but has not announced his plans.

“It didn’t make a lot of sense for him to stay here because he can’t get a Master's degree at Winona State,” Straight said of Beeck, adding he supports any transfers that allow players to achieve goals that extend beyond golf versus, in this situation, taking a handful of undergraduate credits just to extend their playing career. “(That), to me, is kind of a waste. They’re probably not going pro at anything but work. Get yourself a Master's degree. I’m from the business world. I just know if you get your Master's degree, those three key letters behind your name are huge.”

Winona State was enjoying one of the most successful seasons in program history when it all came to a halt as the Warriors were preparing to make their way home from Las Vegas.

They were ranked 43rd out of 214 NCAA Division II men’s programs, per Golfstat.com. More importantly, they were ranked fifth in the NCAA Central Region coming out of the fall season with aspirations of improving on last year’s 10th-place finish at the Central/Midwest Regional and earning one of six national championship berths (its fourth overall and first since 2006).

“We just beat Central Oklahoma (ranked fourth in the Midwest region) and University of Indianapolis (ranked sixth in the Central region),” Straight said. “That just solidified us going to Super Regionals. We were going. We were 15th in the nation in scoring. It was probably the best team we’ve ever had as far as scoring and just putting up (low) numbers.”

Beeck, who was a three-time WIAA Division 2 state qualifier at Sheboygan Falls, was a big reason for that.

In five tournaments as a senior, he finished in the top 10 three times. In what proved to be his final start in purple-and-white at the Warrior Vegas Invite, Beeck shot 73-72 at Stallion Mountain Golf Club in Las Vegas and placed sixth – six shots behind Madsen, who shot 75-64 to win medalist honors by two strokes and help Winona State (297-282) edge Indianapolis by two shots as well.

That’s how it had been most of the season.

“We had some good momentum going into the next tournament, which was the (NSIC) Preview, which unfortunately never happened,” Beeck said. “It would have been really, really fun to finish out the spring season."

“We were literally in the airport (in Las Vegas) flying back home to Minnesota,” Beeck said. “I got a notification from ESPN saying that the NCAA had canceled all (championships) for the rest of the year. I knew golf was done as well. … Right when I found out, I was like ‘Wow, this is it! This is how we’re going to be finishing.’ It was pretty crazy.”

Fresh start in a new home

There have been days over the last month when Beeck has wondered if he is crazy for wanting to extend his collegiate career, let alone in a part of the country somewhat foreign to him.

“I’ve never even been to South Carolina so I’m kind of taking a leap of faith going down there,” Beeck admitted.

Tyler Beeck was second in the Northern Sun Intercollegiate Athletic Conference with a 72.2 scoring average.

Then again, there should be something invigorating about a fresh start for a golfer who has spent most of the last eight years toiling in the shadows.

In high school, Beeck played No. 2 at Sheboygan Falls behind current Marquette University golfer Matt Bachmann, who won the 2016 WIAA Division 2 state championship the year Beeck finished seventh. At Winona State, Beeck cut more than four strokes off his 2018-19 stroke average but was still overshadowed somewhat by Madsen, who improved nearly five strokes himself this season after making a name for himself last summer by topping a deep field to win the Minnesota State Open.

Charleston Southern, which finished eighth out of 10 teams at the 2019 Big South Conference Championship, struggled in the three multi-day events it played last fall, finishing last in two of them and 16th out of 21 teams at the Kiawah Classic. The latter event was one the Buccaneers hosted on the Jack Nicklaus-designed Turtle Point Course at Kiawah Island (S.C.) Golf Resort, which will host the 2021 PGA Championship on its famed Pete Dye-designed Ocean Course.

This spring, Charleston Southern enjoyed a top-10 finish at the 18-team Wexford Plantation Intercollegiate at Hilton Head, S.C. But the Bucs struggled again at the Palmetto Invitational in Aiken, S.C., finishing 14th out of 15 teams days before COVID-19 shuttered its season, too.

“Tyler is going to have a good go at it,” Straight said. “He’s going to see an area (of the country) he’s never seen. … He’ll be playing against some good schools and (he’ll) get to enjoy some new weather. That’s what I’m pushing these guys to do; just don’t hang out here (in Winona).

“The world is big and go find it. That’s why you went to school here. Go chase your dreams.”

It remains to be seen where Beeck will fit in coach Jason Payne’s program that had five seniors among the nine golfers on its 2019-20 roster. But Beeck said he will be motivated to find a home in the lineup as the Buccaneers are scheduled to open the 2020-21 season at the Badger Invitational at University Ridge GC in Madison, a course he knows all too well.

“That’s going to be a good opportunity to go back to a course where I played my state golf tournament and finished my high school career,” Beeck said. “There is a guy transferring in from Florida State as well and I would expect him to be a very good stick. They have a couple other guys who are older so I’m hoping the team is going to be prepared to make a little run here so I can have a good finish to my college career. I’m just looking to make an immediate impact and hopefully carry on the golf I’ve been playing this year and continue that at Charleston Southern.”