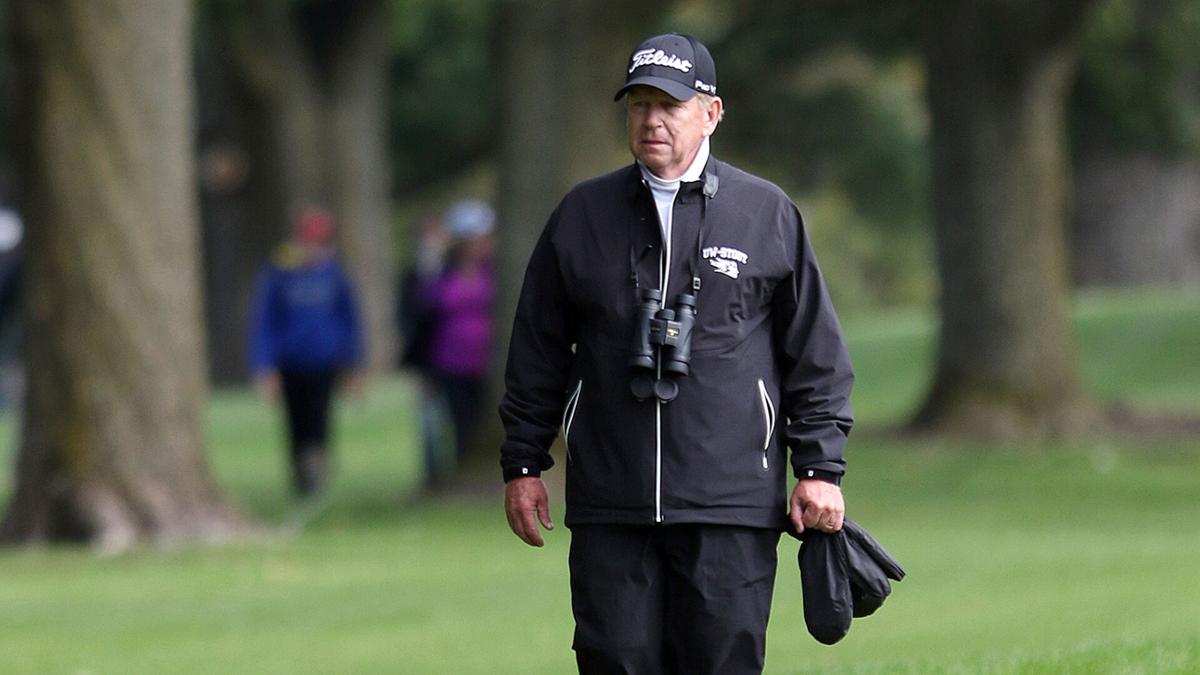 Howie Samb walks the fairway during the 2019 WIAC Championship played at Reedsburg Country Club. The eight-time WIAC coach of the year announced his retirement on Tuesday. 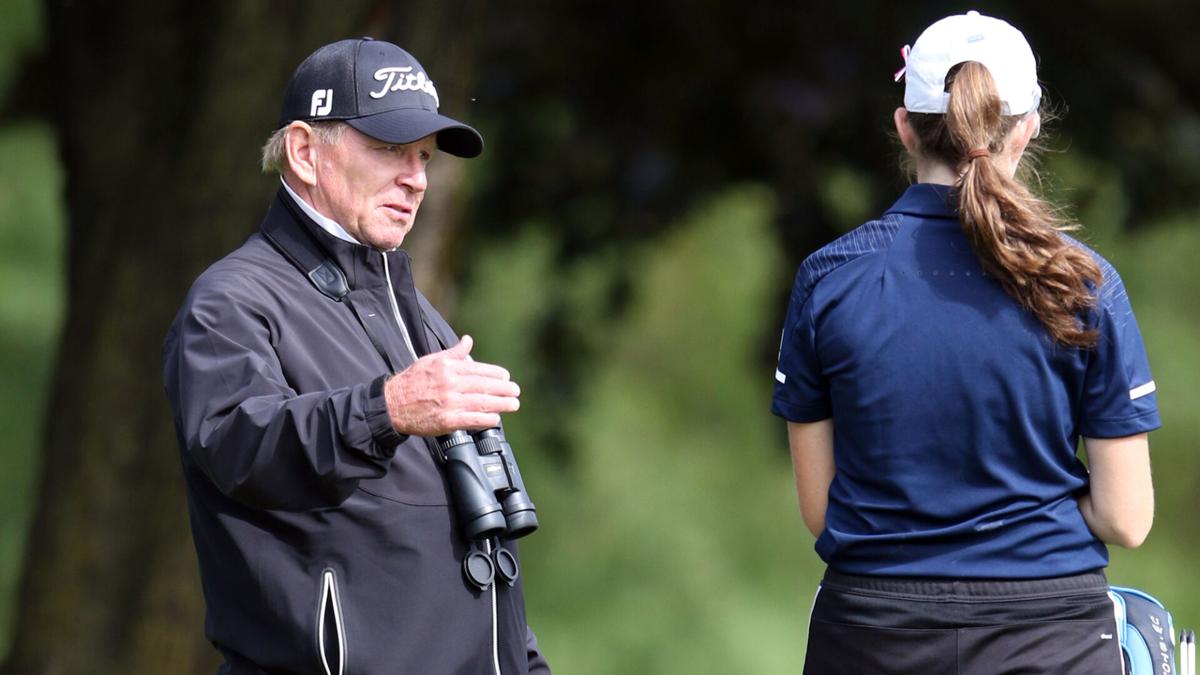 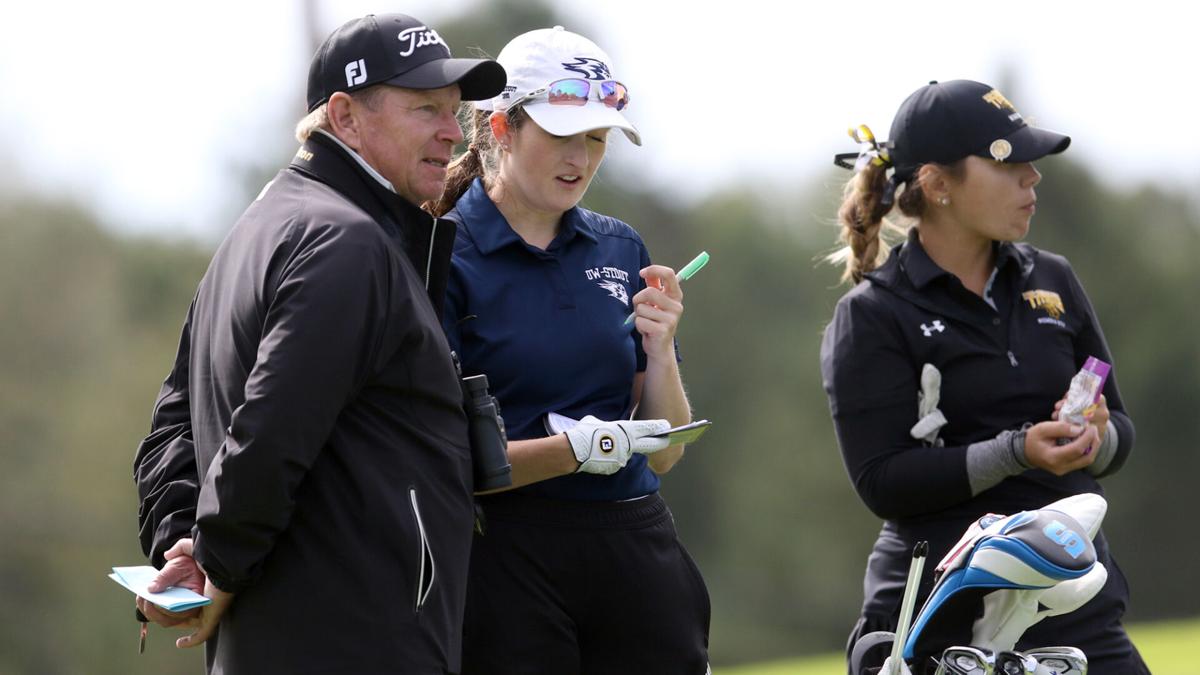 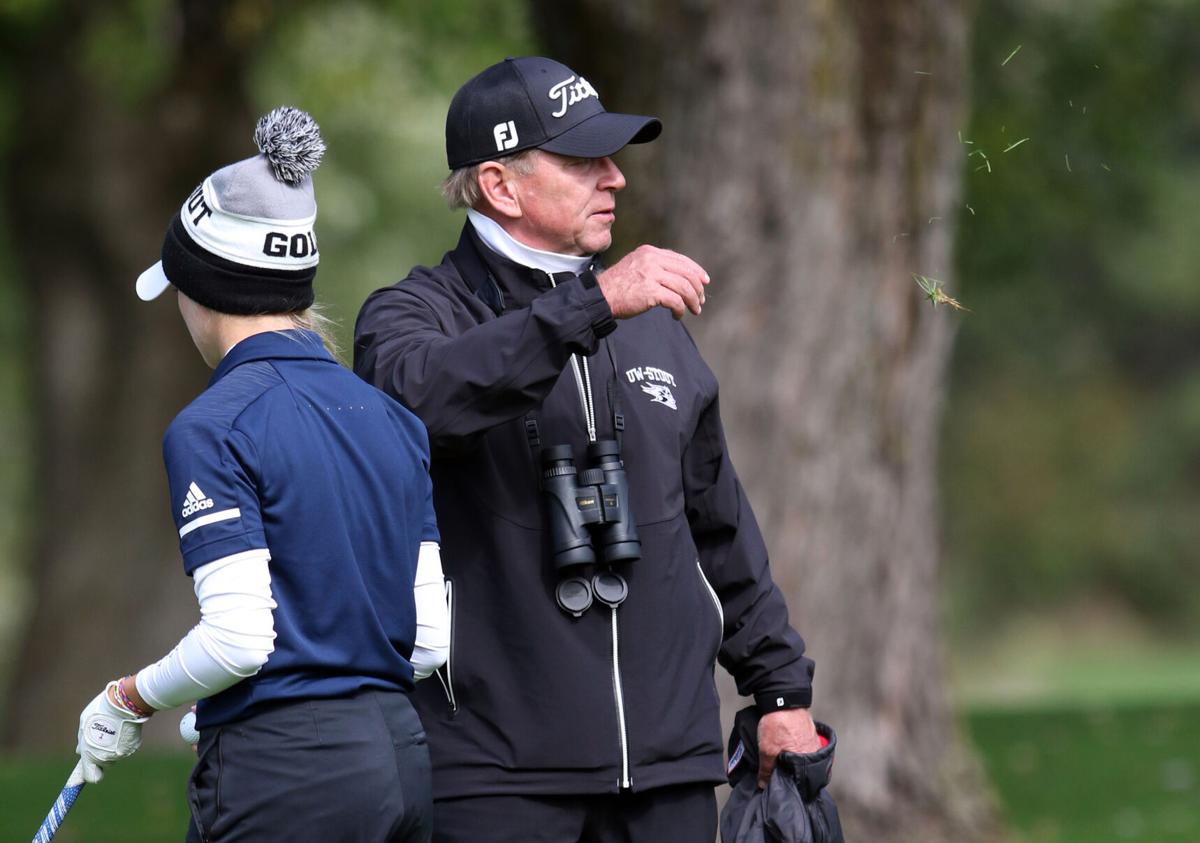 Howie Samb checks the wind before Alexa Filipiak hits a shot at the 2019 championship played in Reedsburg. 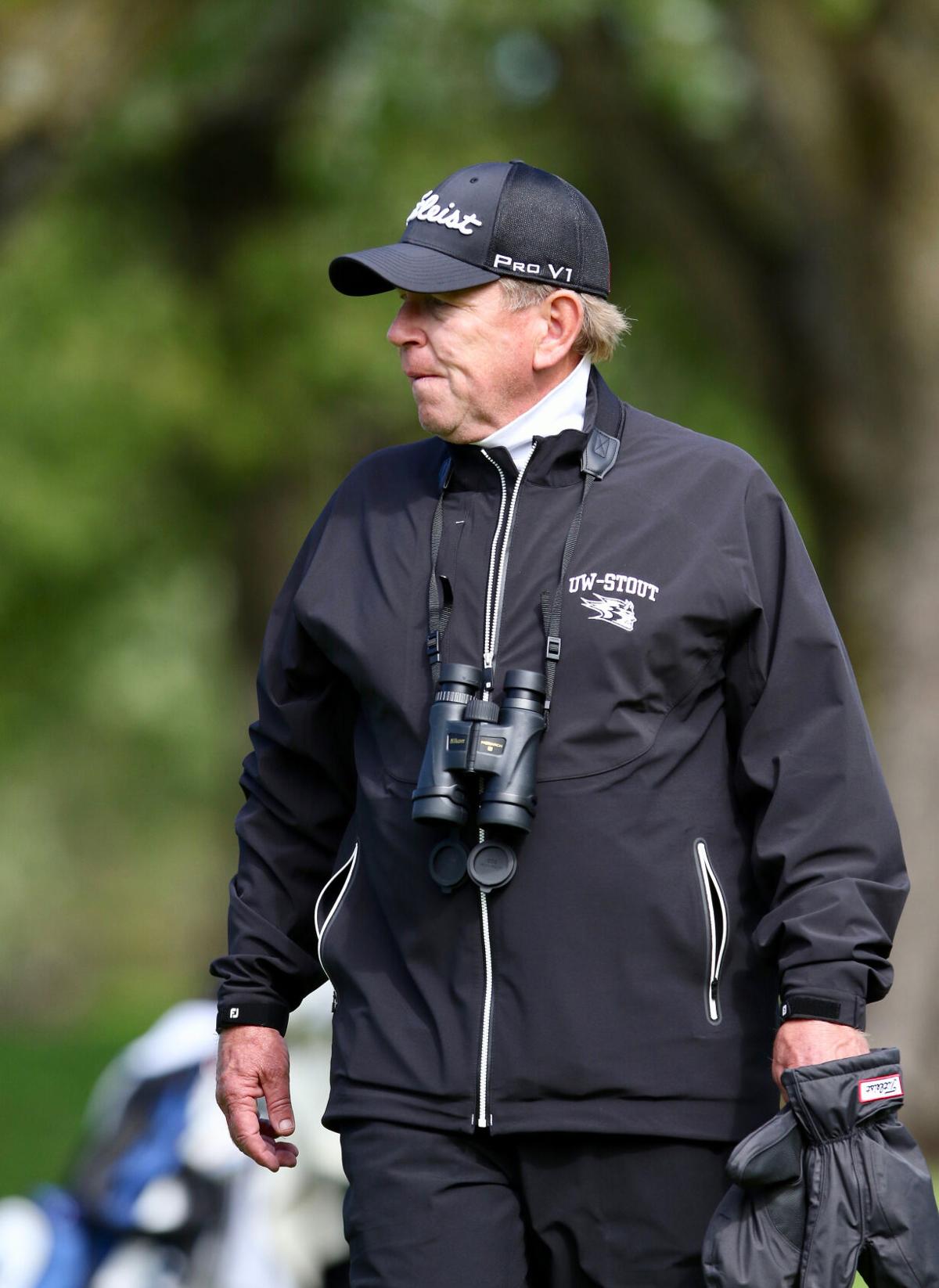 Howie Samb walks the fairway during the 2019 WIAC Championship played at Reedsburg Country Club. The eight-time WIAC coach of the year announced his retirement on Tuesday.

Howie Samb checks the wind before Alexa Filipiak hits a shot at the 2019 championship played in Reedsburg.

Howie Samb thought he had seen just about everything in 12-plus years as the women’s golf coach at UW-Stout, but he has never seen anything quite like what 2020 has thrown at college golf.

After losing out last spring on a chance to coach four seniors in his accomplished Class of 2020 in their final semester of competition due to COVID-19, the ongoing pandemic claimed the fall portion of the 2020-21 season, including the Wisconsin Intercollegiate Athletic Conference Championship. The WIAC, which has delayed the start of its winter sports season through at least Dec. 31, has yet to announce when its spring season will begin or what it will look like. But once women’s golf finally gets the green light it will do so without the most decorated coach in WIAC history.

Saying the COVID-19 hiatus has given him time and perspective to evaluate his coaching future, the 63-year-old Samb announced Tuesday that he is retiring as the Blue Devils’ coach after 12-plus seasons in Menomonie. The eight-time WIAC coach of the year is the only coach in WIAC history to receive the honor more than three times and departs as the fourth most-tenured coach in the conference’s history behind former UW-Platteville coach Pete Reif (18 seasons) and former UW-Whitewater coaches Brett Weber (15 seasons) and Chris Voeller (14 seasons).

Samb informed UW-Stout athletic director Duey Naatz of his decision last Wednesday and spent the weekend telling current and former players as well as potential recruits. The school is expected to act quickly on a replacement for Samb, only the second coach in the program's 15-year history.

“There is never a ‘good time’ to walk away from something you love and something you’ve poured your heart and soul into,” said Samb, who resigned his position as an assistant professor in Stout’s popular Golf Enterprise Management program in May. “However, the longer the pandemic has gone on, the more time I’ve had to realize that no matter when we resume competition there will be this sense of starting anew. That said, it was hard not to think in those terms without recognizing that if I was going to step away – ever – from coaching, now might be the best time for it to happen.”

Samb, a Spring Valley native and 1980 UW-Stout graduate, returned to Menomonie in 2006 after spending more than 15 years as the head professional and general manager at Willingers Golf Club in Northfield, Minn. He helped UW-Stout launch its GEM program in January of that year and took over the women’s golf program in 2008, earning the first WIAC coach-of-the-year honor in 2009.

Since 2012 and the start of the most competitive era in the 23-year history of women’s golf in the WIAC, no program in the conference has enjoyed as much success as Stout has under Samb.

The Blue Devils won WIAC championships in 2012, 2014 and 2016 – and the WIAC’s automatic NCAA Division III Championship berths that went with them –  and placed second four times, including the last three years. They have produced 20 all-WIAC golfers in that span with nine first-team selections – including a pair of three-time first-teamers in Rachel Hernandez and Britt McNett-Emmerich, the Blue Devils’ lone WIAC player of the year (in both 2012 and 2014) – and 10 second-team selections, plus the WIAC’s inaugural newcomer of the year in 2019 in freshman Klairissa O’Reilly-Dye.

Samb believes landing McNett-Emmerich and Minnesota’s Mariah Chesley in the same recruiting class in 2011 opened the door for the sustained success the Blue Devils enjoyed over the last decade. A successful high school golfer at Madison  West, McNett-Emmerich was drawn to the school by its GEM program and has gone on to earn Class A status in the PGA of America while serving as an assistant professional at Blackhawk Country Club in Madison and becoming a girls golf coach herself at Madison Memorial. Chesley was one of several golfers on Samb’s watch to major in packaging engineering, helping her land the position she holds today at General Mills.

“Britt was one-of-a-kind in both her ability and her personality and she wore our ‘Bleed Blue’ motto on her sleeve,” Samb said. “Mariah was not only a great player, but the effort she put in as a team leader – helping in recruiting and working so hard to get and keep everyone involved in the ‘team’ concept – was critical to our success. That led to Rachel Hernandez coming here their senior year and then chasing all of Britt’s records. Those three were bookends of an incredibly deep 2015 team that finished ninth at NCAAs in Florida and will probably go down as our greatest team to date.”

Even so, what will go down as Samb’s final tournament as Stout coach – the 2019 WIAC Championship at Reedsburg Country Club – produced another first for the program.

It marked the eighth year in a row that the Blue Devils had at least one golfer in the top five.

“We are very much a team-first program, but to have the top two finishers in a league as tough as ours was in 2019 speaks volumes for the work those two young ladies put in to pull that off,” Samb said, noting that Kluess beat three former WIAC champions who were in the field. “Madison set the bar high for herself when she finished fourth at conference as a freshman while Trystin went from tied for 11th to tied for sixth to solo third before winning the whole thing. Whether you are someone trying to sustain excellence as Madison did or chasing it like Trystin did, getting there takes work.

“At the end of the day, Trystin and Madison embodied what I preached here at Stout. We want student-athletes willing to commit to us their time, effort and willingness to listen and learn and, in return, we gave them a promise that they would leave us better than they were when they arrived.”

Academically, his program has ranked in the top 25 in the Women’s Golf Coaches Association Division III All-Scholar Team GPA Awards in each of the three years since the inception of the rankings. In 2019-20, Stout’s 3.696 grade-point average ranked No. 15 in NCAA Division III.

“All those awards and honors are wonderful, but it needs to be said that every golfer who came into our program made an impact here,” Samb said. “In fact, after I came to my decision, I went back and looked at our all-time roster on our website and, first of all, the number of GEM majors still in the golf business is truly amazing. But what really hit home was how each name on that list meant so much to me personally and to our program. … I have said it many times, but our golfers have come here, first and foremost, to receive an education and get a degree, it was important that they learned a lot about themselves and their golf game along the way. By the end of their careers, we hoped that they looked back on their time at Stout and saw the growth they made in all areas of their life.”

Samb resides in Bayport, Minn., along with his wife, Penny. The couple have two adult children, Garrett and Natalie. Garrett is assistant vice president and financial solutions advisor for Bank of America in Woodbury, Minn., and still plays scratch golf. Natalie, who enjoyed a successful college career at NCAA Division I Wichita State, is the membership director for Topgolf in Kansas City, Mo.

“They call it retirement, but I’ll be working as hard as I ever have to stay competitive with my own kids,” Samb joked.