OSHKOSH – When a private country club changes its business model to semi-private and starts accepting public play, it’s the equivalent of a new course opening for 99 percent of golfers in the region.

That’s the case at Oshkosh Country Club, which was founded in 1899 and just this year started selling tee times to Joe Q. Public. With the veil of exclusivity removed, it’s no surprise that as of mid-June, non-members accounted for about 72 percent of the club’s 2,500 rounds played.

“Public play has been solid,” said Donny Sell, the club manager. “We’re just getting the word out yet. There are some stereotypes we’ve got to get rid of, with it having been private for such a long time.”

Like, forever. This is an old-line club, built by and for Oshkosh’s golfing cognoscenti and located a drive-and-pitch from the western shore of Lake Winnebago. It’s one of nine founding clubs of the Wisconsin State Golf Association, and Walter Hagen and Gene Sarazen are among the titans of golf who played it in the 1920s and ‘30s, according to the club’s website.

That’s some serious history and enough bona fides to give the place a case of snob-itis. Unlike Bushwood, though, the vibe at Oshkosh CC is decidedly welcoming and laid back. The staff skews young and energetic – not a cardigan in sight – and the place was bustling when I visited, with sanitized carts going back out almost as fast as they came in.

The parkland course is the definition of “short but tight,” with trees lining nearly every fairway. It measures only 6,312 yards from the tips, but plays longer because you’re not hitting driver on every hole unless you’re really good at threading the needle. A good example is the 355-yard first hole, with water flanking the left side of the fairway and protruding into it at about 230 yards.

“Everybody looks at the yardage and sees 6,300 and they think they’re going to hit driver all over the place, and that’s not how it plays,” Sell said. “Our members obviously know the course very well, but sometimes you see people hitting shots and you’re like, ‘That’s not going to work.’ ”

Water comes into play on numerous holes and there are a few forced carries, but they’re manageable from the tee box commensurate with a golfer’s ability. If we’re going to be honest, even hackers judge courses on the quality of their greens, and Oshkosh CC’s are pure, with enough movement in them to discourage carelessness.

My favorite hole was No. 14, a 185-yard par 3. The green has a backstop and balls that barely miss right or left stand a good chance of kicking down onto the surface. But get above the hole, as I did, and the putt is lightning fast. I barely breathed on my 25-footer and it wound up 10 feet past the cup. 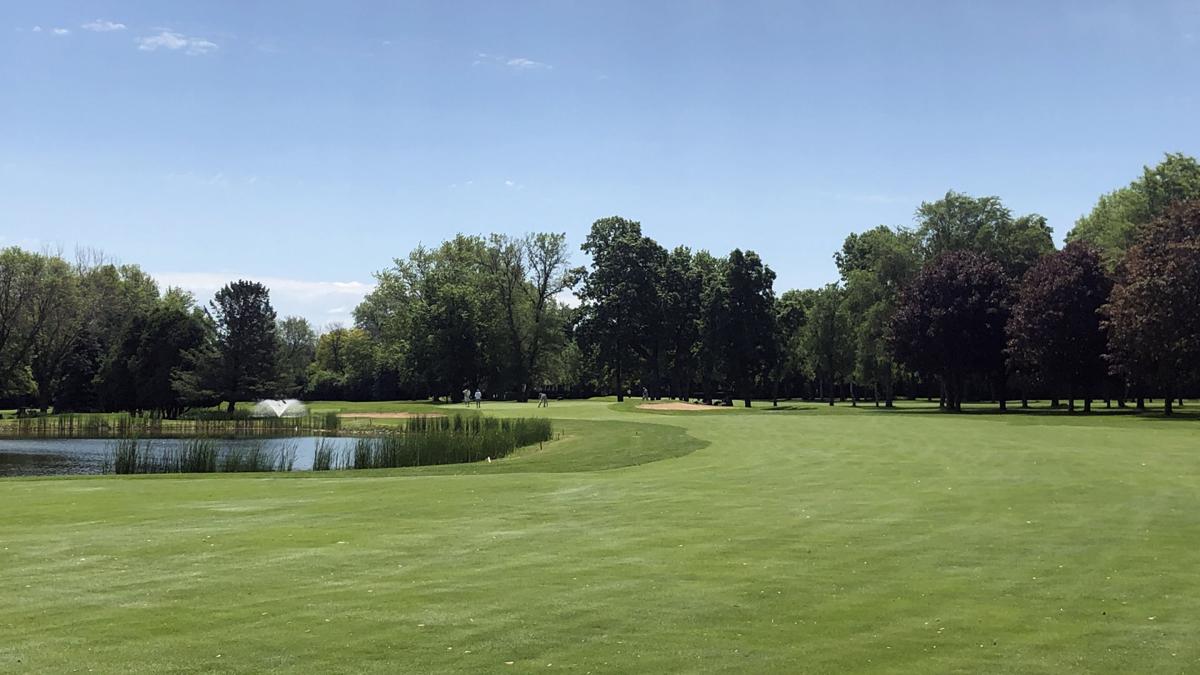 A water hazard on the left greets those teeing off on the par-4 first hole at Oshkosh CC. 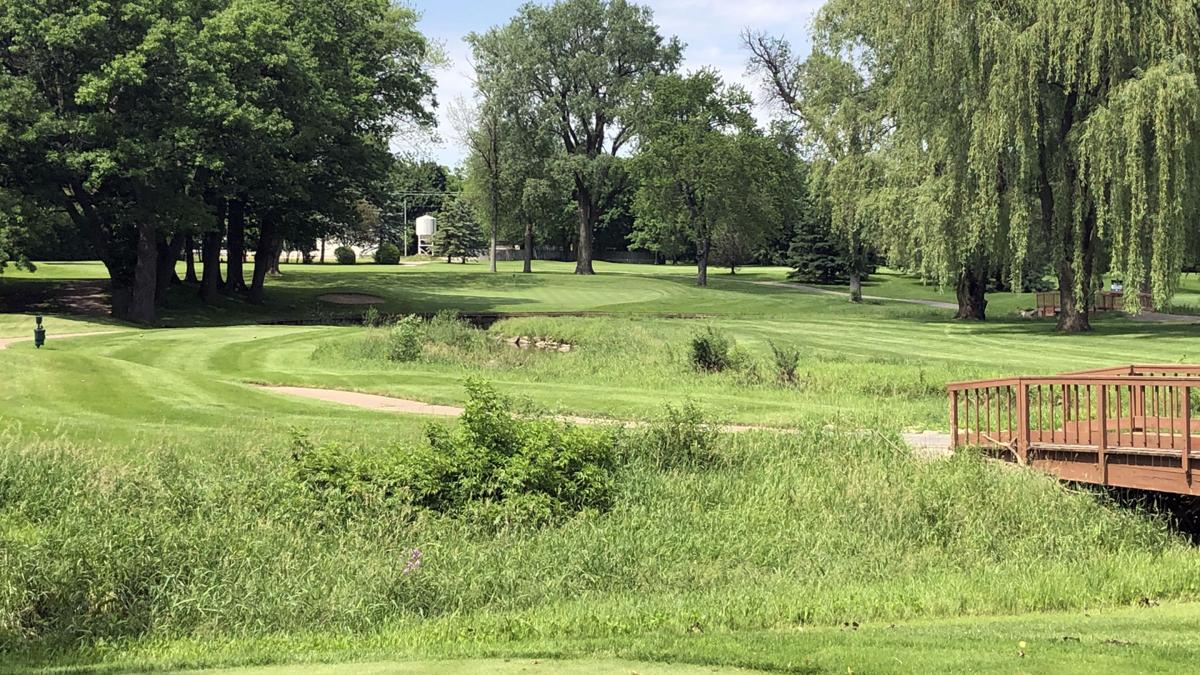 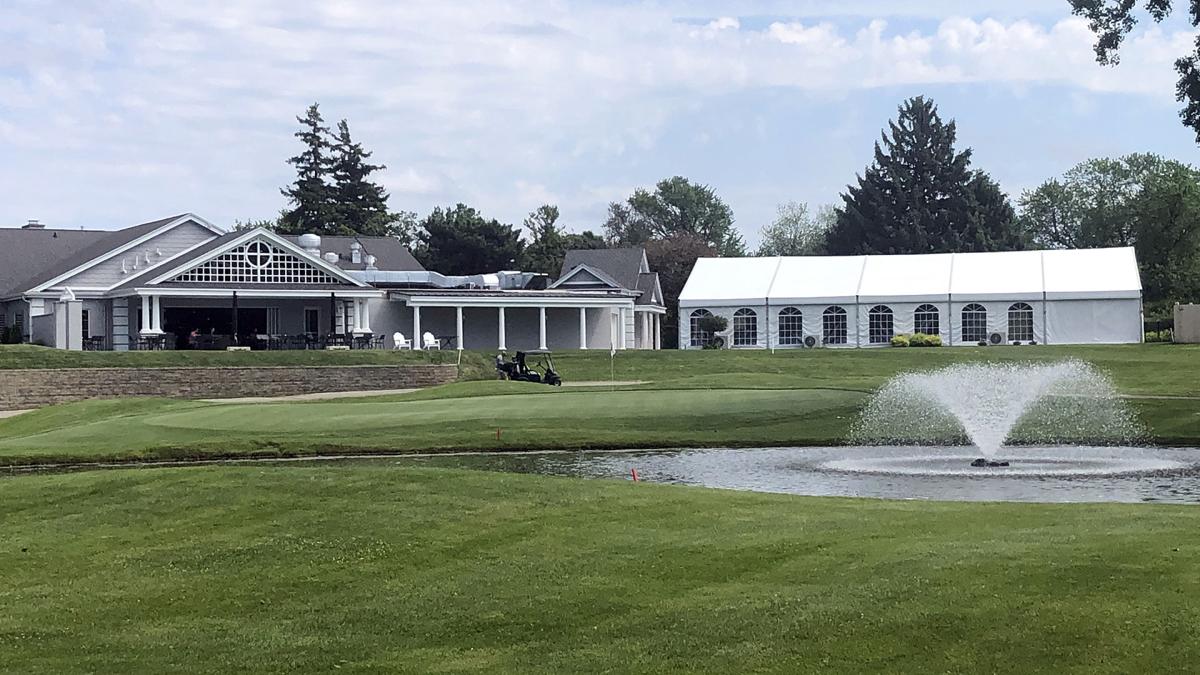 The clubhouse is the backdrop on the picturesque par-3 18th hole at Oshkosh CC. 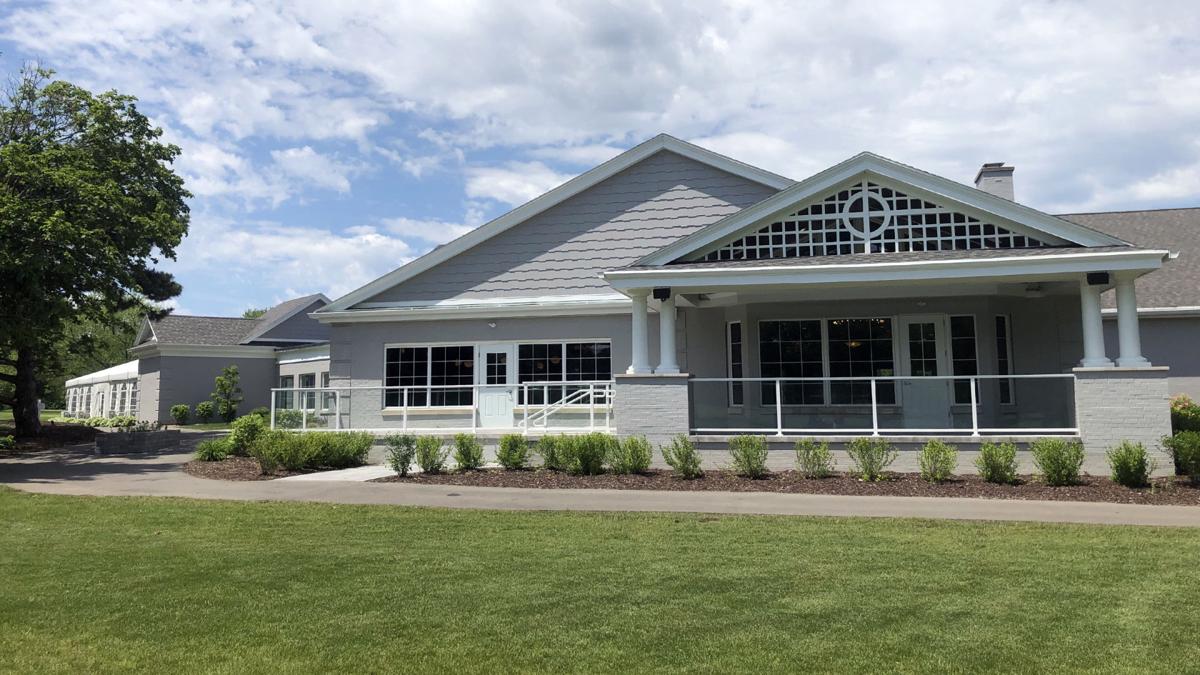 The clubhouse at Oshkosh CC. 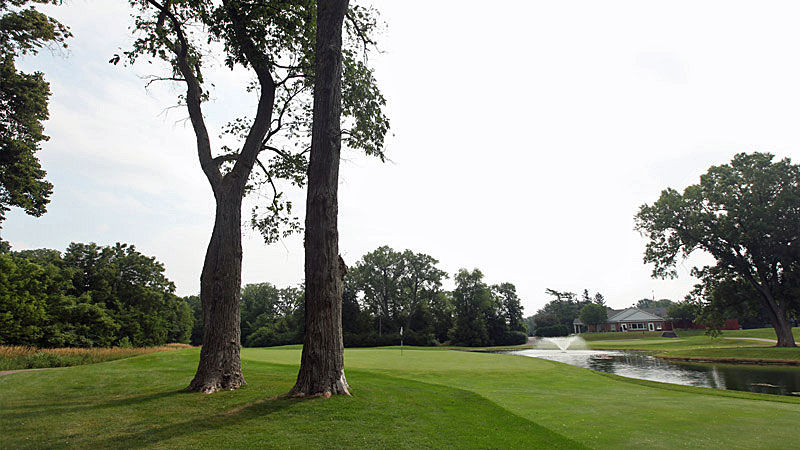 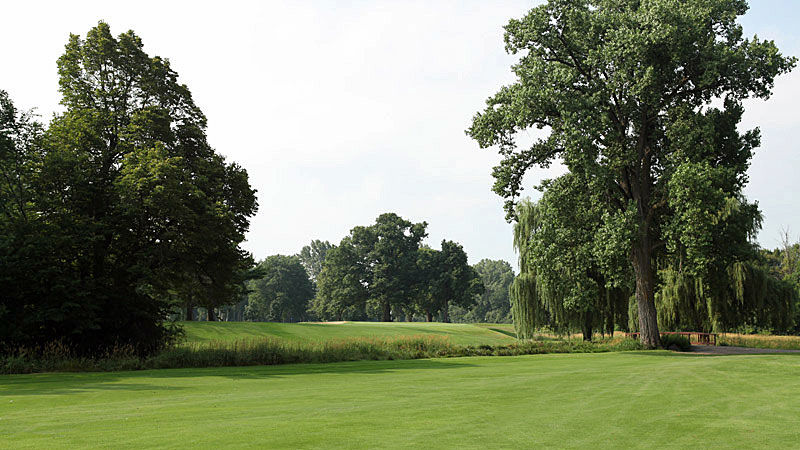 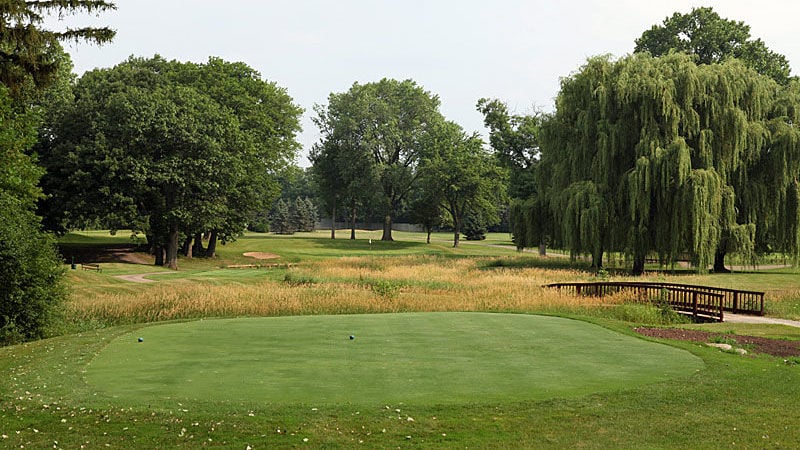 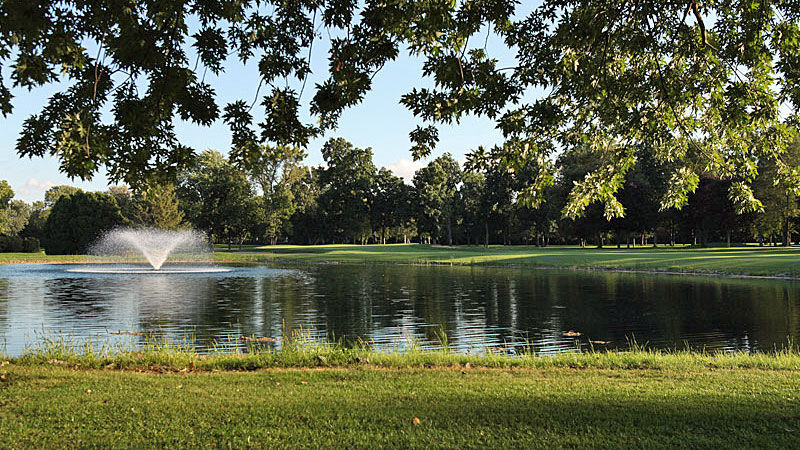 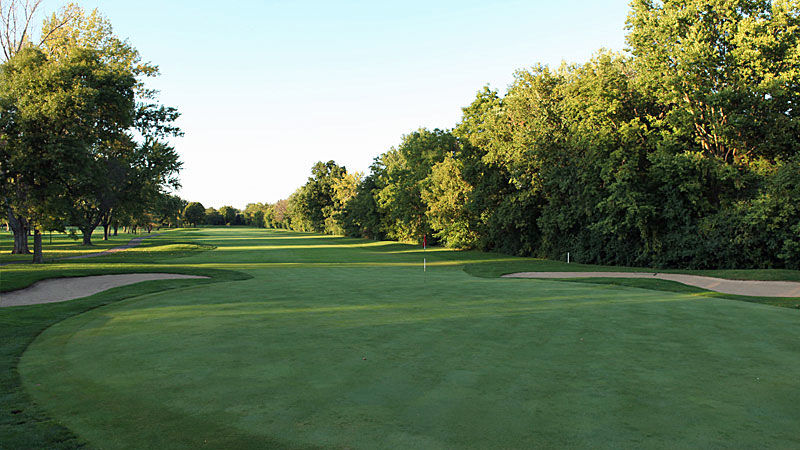 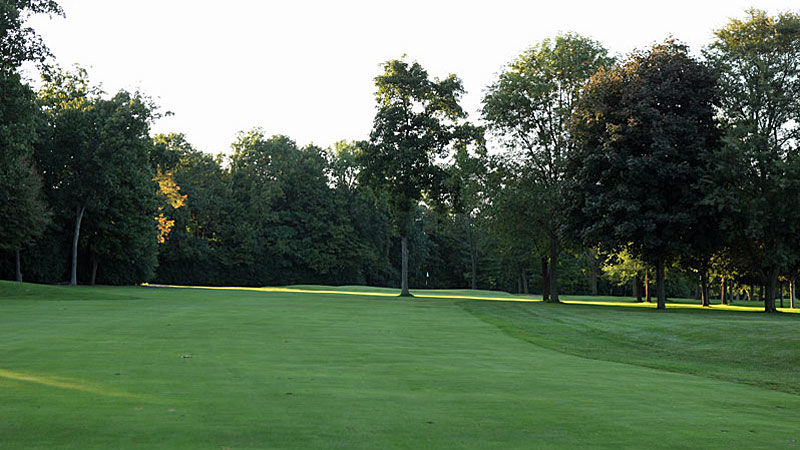 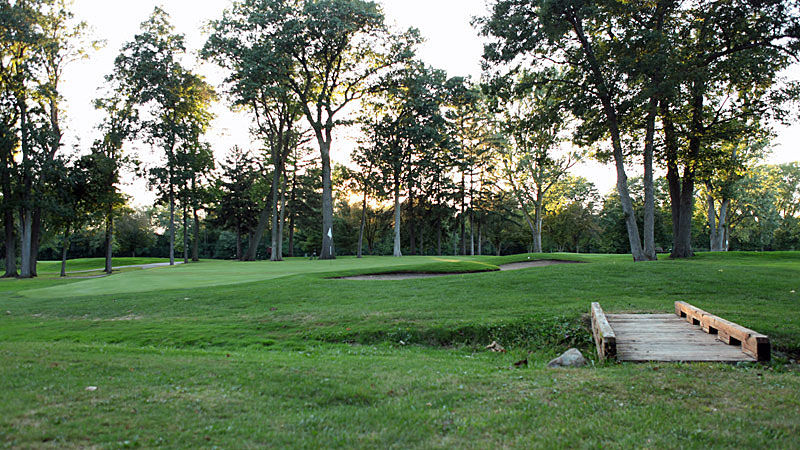 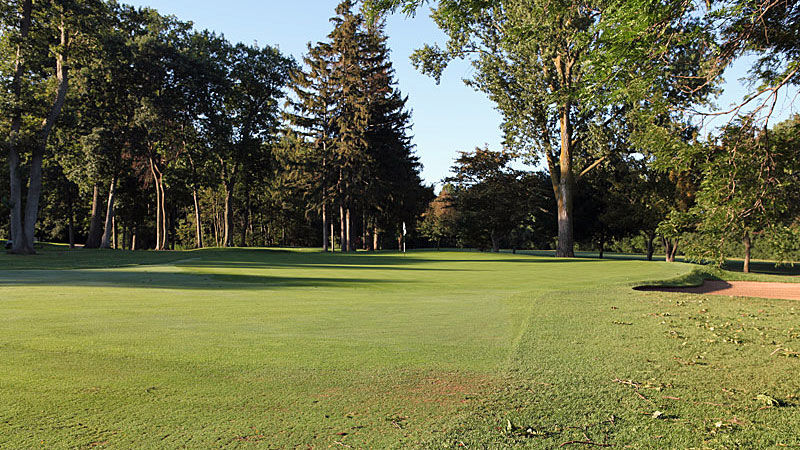 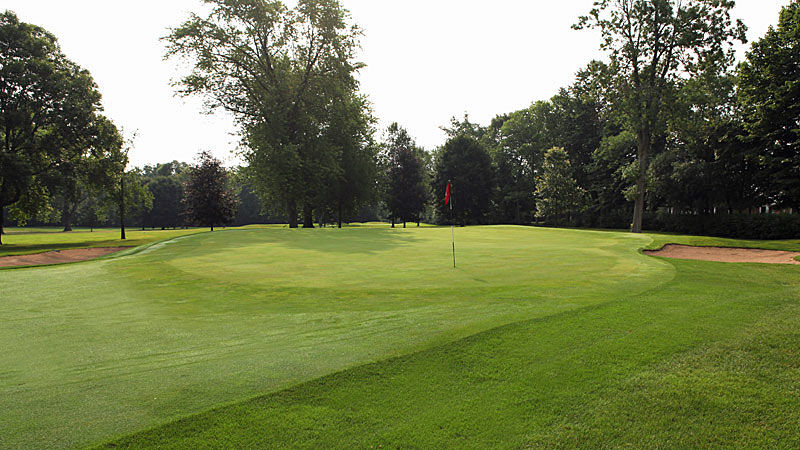 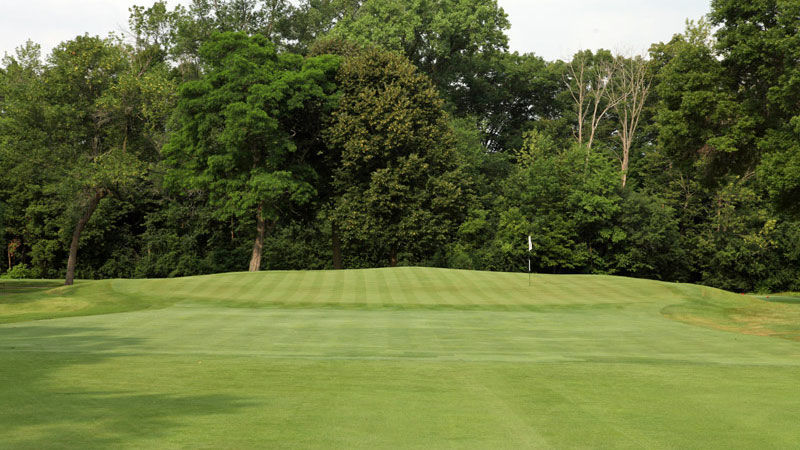 The historic golf club went from strictly private to semi-private in 2020.

A water hazard on the left greets those teeing off on the par-4 first hole at Oshkosh CC.

The clubhouse is the backdrop on the picturesque par-3 18th hole at Oshkosh CC.

The clubhouse at Oshkosh CC.

The finishing hole also is a par 3, just 155 yards from the back, but the shot is played over water and often with a crowd watching from the clubhouse patio. Sells calls it “the best seat in town.”

It's not often that the golf course has the best restaurant in town, but that might be the case at Oshkosh CC, where the menu at TJ’s Highland Steakhouse features USDA prime dry-aged beef broiled at 1,500 degrees, plus a selection of fresh seafood and specialty dishes prepared by chef Michael England. The restaurant also has an extensive wine and spirits list.

“Obviously, the added traffic (from public play) is really fueling the restaurant,” Sell said. “We’ve had busy lunches and busy early dinners. Getting people out here to see the (golf) product we have brings them in for lunch or dinner later.”

Oshkosh CC is open to the public six days a week. Thursdays are reserved for members, who also get preferential tee times on Saturday mornings (unused tee times are released to the public seven days in advance).

The regular rates for public play are $60 weekdays and $65 weekends (golf plus cart). The course recently started a season-long promotion called “Wisco Wednesdays at OCC.” For $45, golfers get 18 holes with a cart; hot dogs are $1 and brats and beers are $2.

“With our price point, we’re attracting good players, good golfers, people who respect the game,” Sell said. “We welcome entry-level players, too, but there are other places they can play for $35 or $40. It’s a challenging golf course.”