OCONOMOWOC – The danger in renovating one of the oldest courses in America, one that traces its lineage to Scotland and early U.S. Open champions Alex Smith and Willie Anderson, is burying all that history under 007 Creeping Bentgrass.

With a new routing, 18 new green complexes and a reimagined clubhouse with 21st century amenities, The Club at Lac La Belle ran the risk of severing ties with its glorious past.

Matt Morse, who purchased the club in 2018 and oversaw the two-year renovation, wanted a fresh course with superior playing surfaces and interesting design features. But he also wanted to pay homage to the club’s fascinating history.

Pardon the mixed metaphor, but Morse, founder and CEO of Sussex-based The Prestwick Companies, has hit a home run. Or, perhaps more appropriately given that the sport is golf, a Grand Slam.

The Club at Lac La Belle, a semi-private club with memberships and tee times open to the public, will celebrate its grand opening June 20. A nine-hole loop opened last fall and has been played this spring, but I had the pleasure of playing all 18 holes last week – the front nine with Matt’s son, Tyler Morse, the general manager, and the back nine alone after Tyler excused himself to attend a meeting.

Craig Haltom, president of Oliphant Golf Management and a course architect whose star is on the rise, did a superb job solving persistent drainage problems and laying a fun, walkable and diverse routing over the bones of the original course, which opened in 1896. Superintendent Jimmy Cavezza, whose portfolio includes work at Sand Valley, Stevens Point Country Club, Pronghorn and Pebble Beach, deserves a big share of the credit for nursing the course through its infancy.

The renovation involved moving 150,000 cubic yards of dirt, taking down trees, rebuilding the irrigation system, raising fairways two to three feet and capping them with 15 inches of sand. If you played The Club at Lac La Belle during its previous incarnations as a private club and in more recent years as a public facility under a couple different ownership groups, you’ll recognize a few holes.

Make no mistake, though, this is a brand-new golf course.

“It felt like if it was going to make it another 125 years, it needed to be modernized,” Matt Morse told me last fall. “We gave it new life and hopefully it will be something people will enjoy 125 years from now.”

The key to the project was the purchase of land from the Village of La Belle so that four new holes could be built on the west side of Pennsylvania Street, near the site of a one-time monastery. That allowed Haltom to route the rest of the course off chronically wet areas.

“We would not have bought the golf course without being able to buy that land,” Tyler Morse said.

It’s difficult to describe The Club at Lac La Belle by style. The fairways are firm and bouncy, so in that respect the course is inland-linksy. But there are water hazards and creeks to avoid and cross, and stands of trees and specimen oaks with which to contend. It’s a little bit parkland, a little bit heathland, a little bit rock and roll. 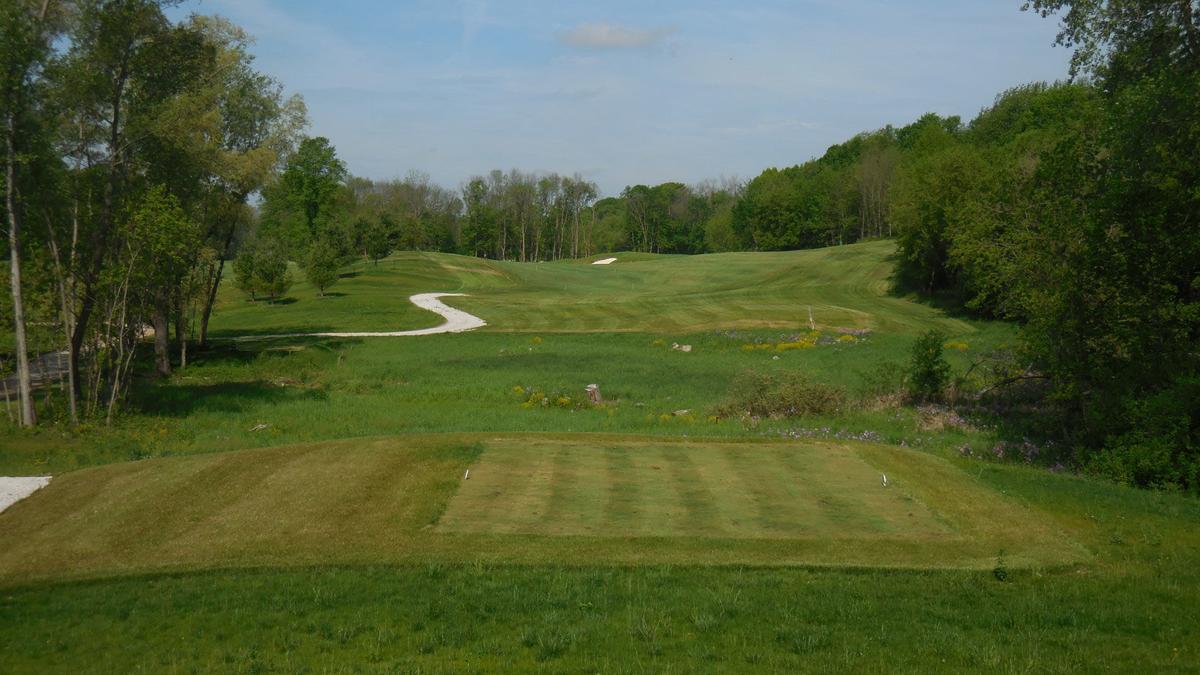 The first hole at The Club at Lac La Belle, a straightaway par-4. 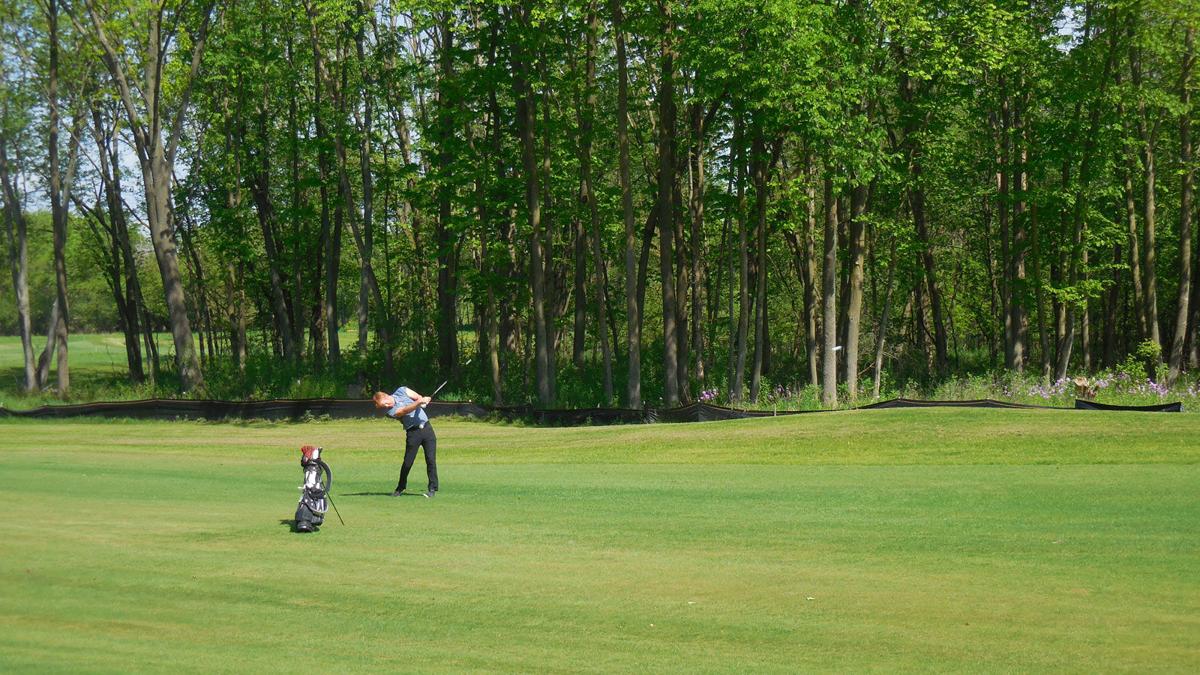 Tyler Morse, general manager at The Club at Lac La Belle, hits his approach on the second hole. 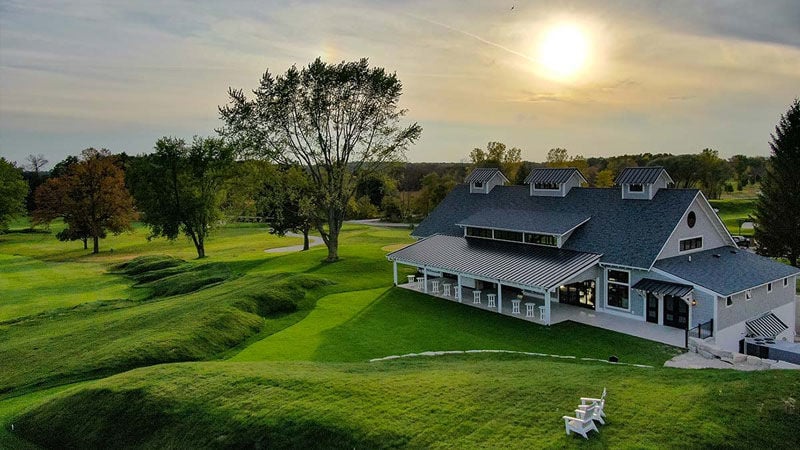 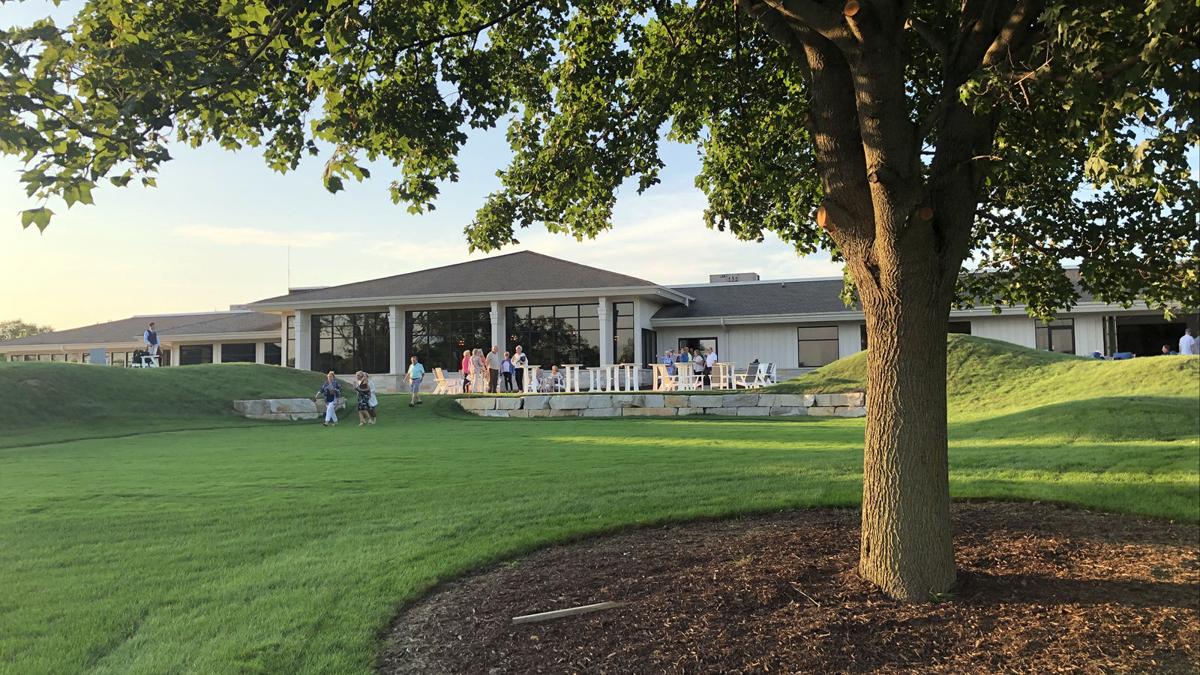 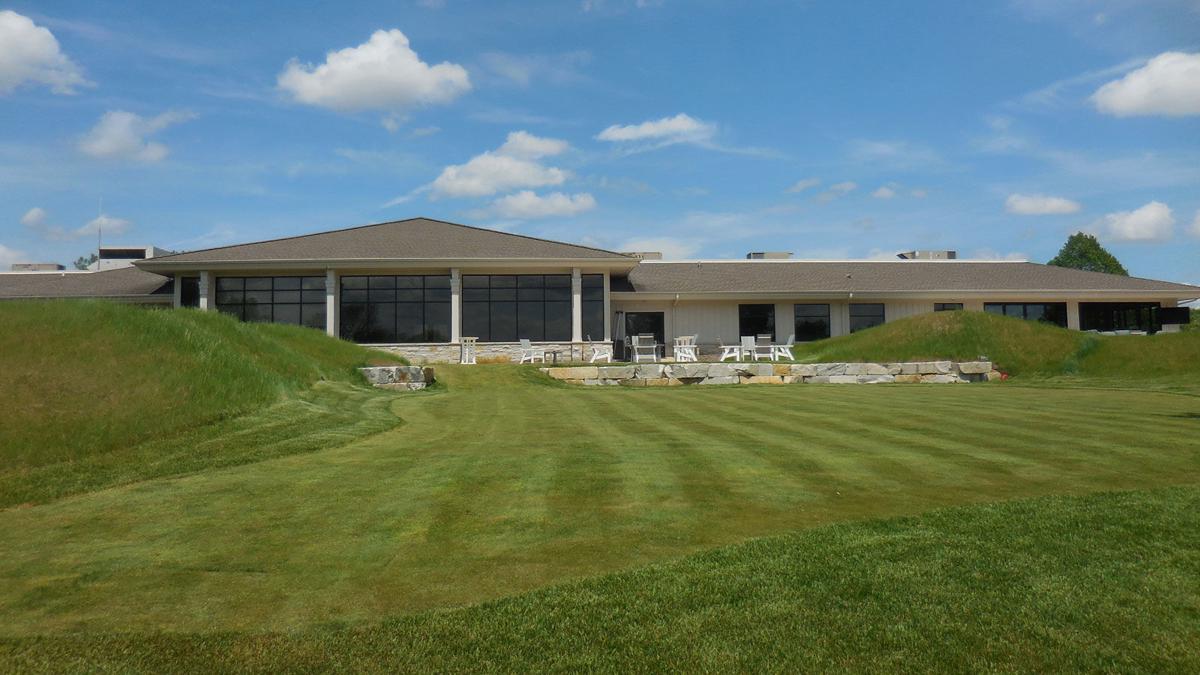 The clubhouse at The Club at Lac La Belle. 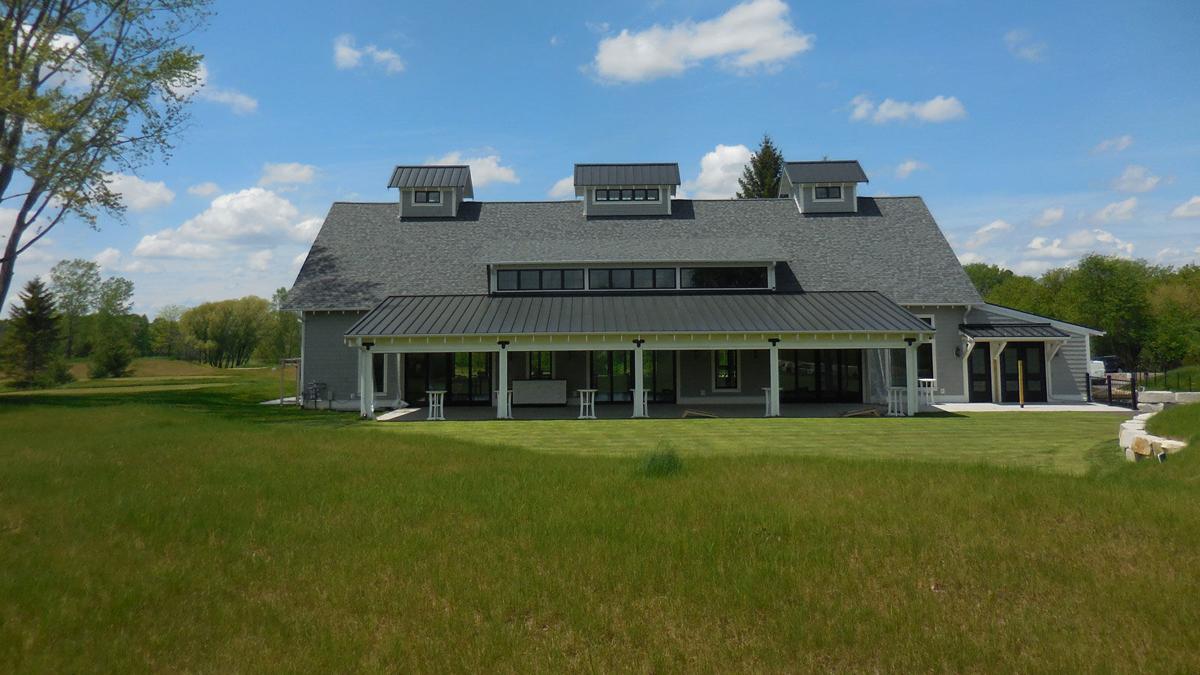 The carriage house at The Club at Lac La Belle will be used for weddings and member events. 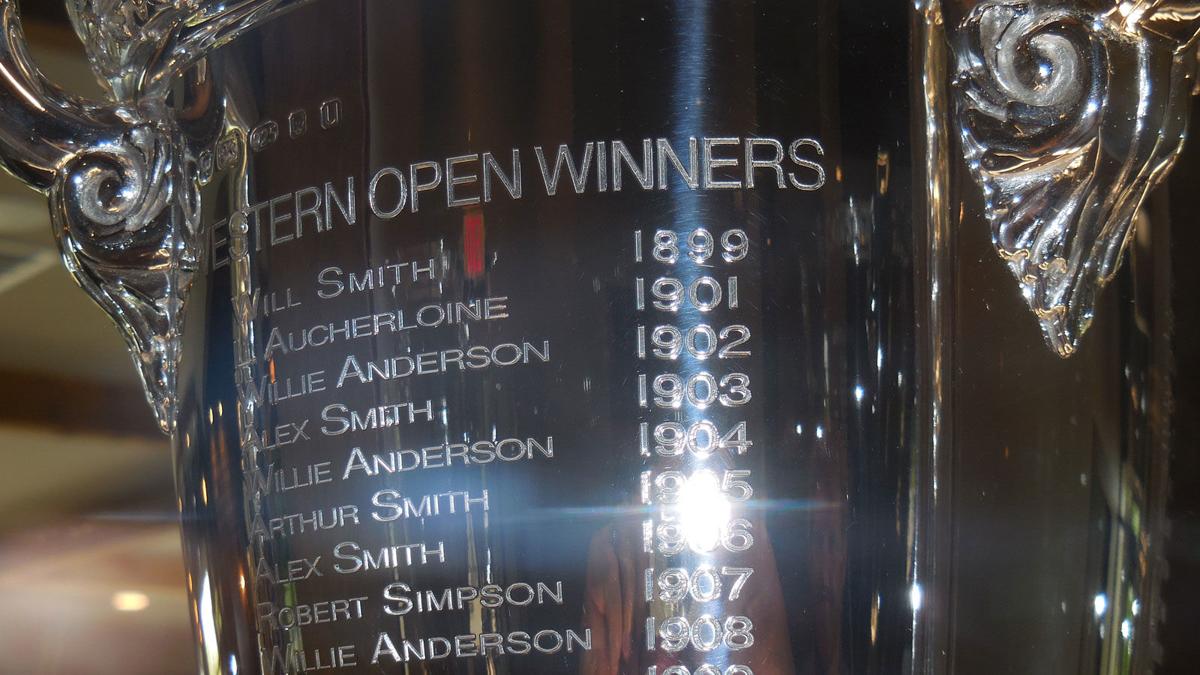 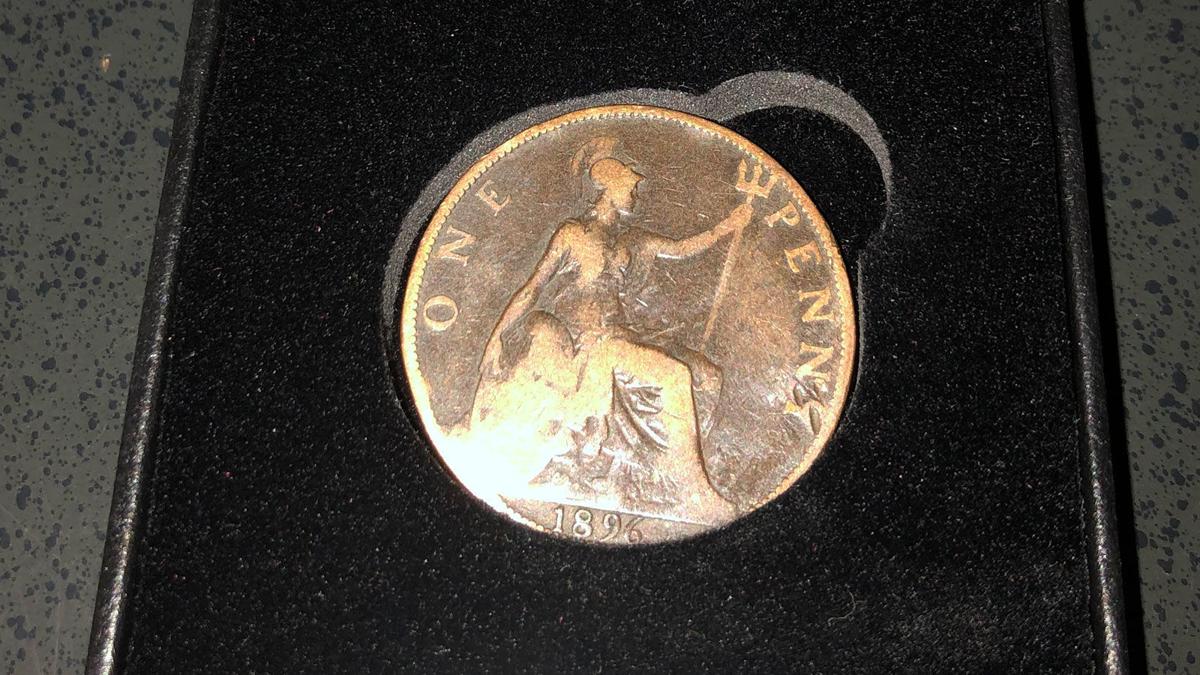 Every golfer who makes a hole-in-one at The Club at Lac La Belle will receive an 1896 British one penny. That’s the year La Belle was founded. 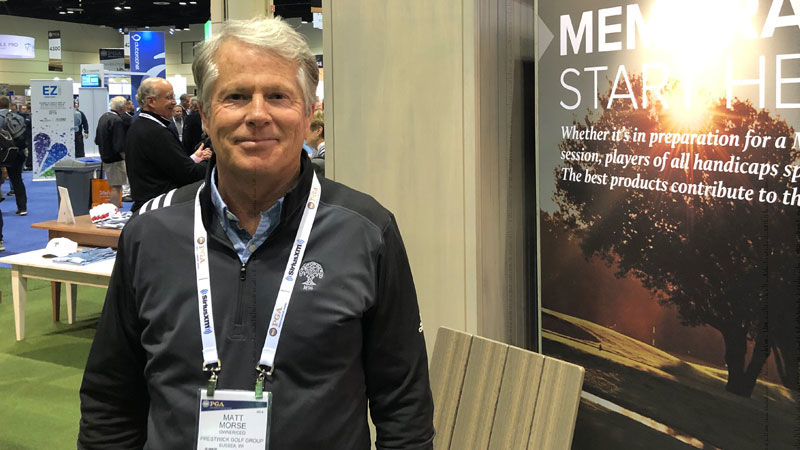 Matt Morse, founder and CEO of Sussex-based Prestwick Golf and owner of the renovated The Club at Lac La Belle. 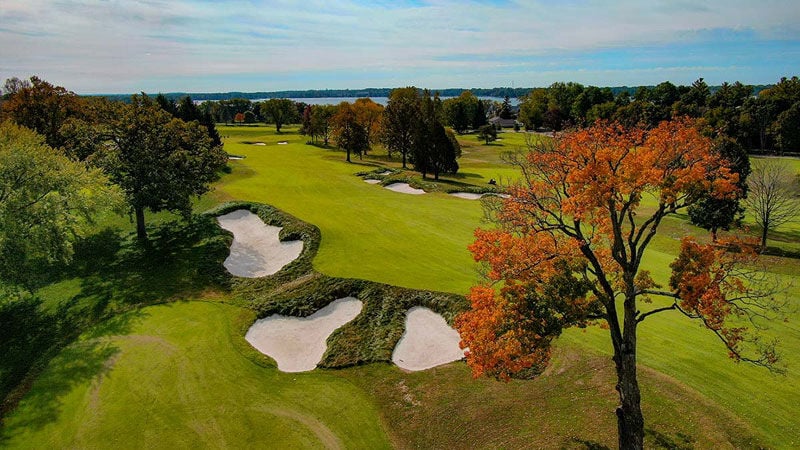 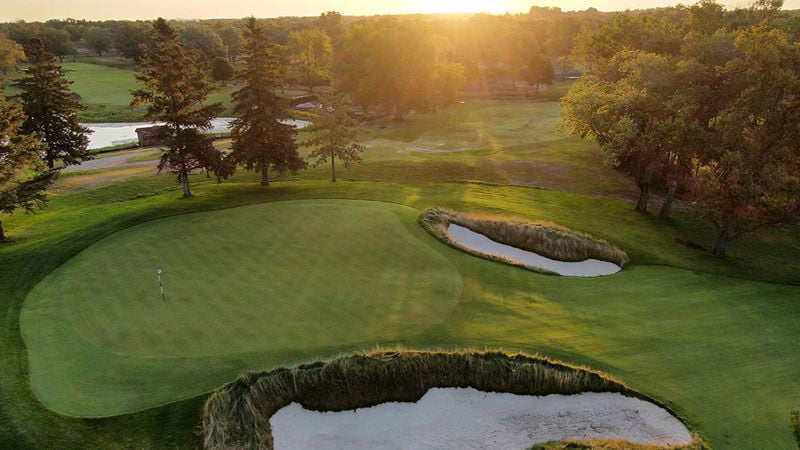 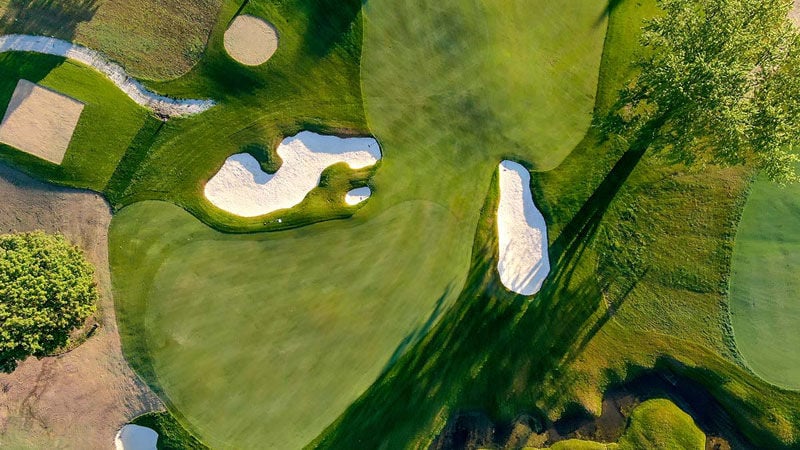 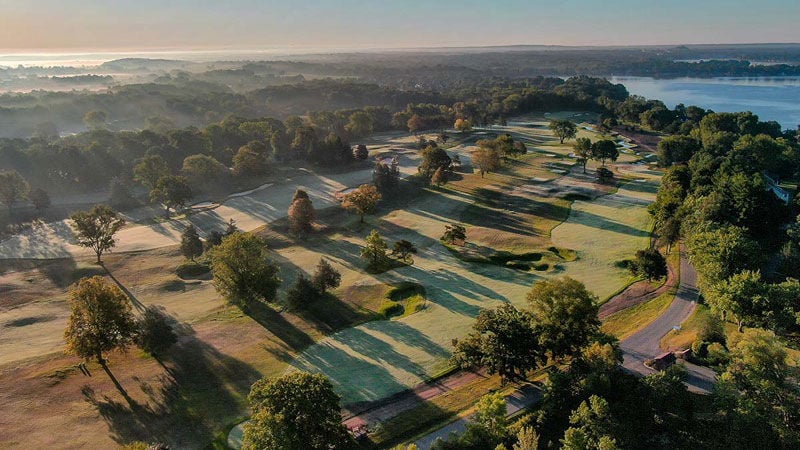 Photos: The new Club at Lac La Belle in Oconomowoc

One of the oldest golf courses in America will debut a dramatic makeover June 20, 2020.

The first hole at The Club at Lac La Belle, a straightaway par-4.

Tyler Morse, general manager at The Club at Lac La Belle, hits his approach on the second hole.

The clubhouse at The Club at Lac La Belle.

The carriage house at The Club at Lac La Belle will be used for weddings and member events.

Every golfer who makes a hole-in-one at The Club at Lac La Belle will receive an 1896 British one penny. That’s the year La Belle was founded.

Matt Morse, founder and CEO of Sussex-based Prestwick Golf and owner of the renovated The Club at Lac La Belle.

Parts of the course resembled Sage Run, the new Paul Albanese design near Harris, Mich. I saw a little bit of Sand Valley in the bunkering – no surprise, considering Haltom worked on the construction crew there. The radical greens are unlike anything I’ve seen in Wisconsin and brought to mind now-closed High Pointe in Williamsburg, Mich., Tom Doak’s first 18-hole design.

The opening hole at The Club at Lac La Belle is a par 4 of moderate length, meant to ease a golfer into his or her round. No. 2 is a short par 4 with a bit of visual deception – golfers will be tempted to aim directly at the green from the tee, but that brings a series of bunkers into play. The better line is to a wide, partially hidden landing area to the right, which offers a better angle into the green.

My favorite hole is No. 4, a wild par 3 with a rollicking green complex. There’s a massive false front, swales and ridges and a “punch bowl” in the back-right corner. The Morses wanted a “hole-in-one” pin location, and this is it. When the flagstick is in that collection area, it will be a nervy tee shot of some 200 yards, but the reward for a well-struck shot will be a potential ace or a tap-in birdie.

The 10th hole, a par-4 that doglegs to the right, is recognizable as the old No. 1 and is followed by a par-3 over water and a long par-5 with water coming into play off the tee and on the second shot.

The finishing three-hole stretch is as good as it gets. No. 16 is a par 5 with a double fairway separated by a lone tree. The safe shot is right of the tree, which lengthens the hole. Big hitters will attempt to carry intimidating bunkers left of the tree – a risk-reward shot if ever there was one.

The 17th is a pretty little downhill par 3 and No. 18 is an all-you-can-handle par 4, up the hill toward the clubhouse and a green that has more movement than Matthew Wolff’s swing. I hit a good drive and a solid 3-wood and was still 30 yards short.

Upon completing your round, you would be remiss in not spending time in the clubhouse, where the La Belle history is preserved with artifacts, murals, displays and replica trophies.

The course was the third in Wisconsin to be approved as an allied member of the United States Golf Association. A playground for wealthy Chicagoans, La Belle was the summer home of Smith, Simpson and later Anderson, a four-time U.S. Open champion. Early members included mail-order pioneer Montgomery Ward and beer baron Frederick Pabst.

La Belle’s strong ties to Carnoustie continue to this day. Smith bequeathed his golf medals to Carnoustie, which will lend them to La Belle later this year to be temporarily displayed in a trophy case in the Rivalry Pub, so named because of the friendly rivalry between Smith and Anderson, the Arnold Palmer and Jack Nicklaus of their day.

There are older courses in the U.S., but not many. And it can be argued that La Belle is as historically significant as more famous clubs such as the National Golf Links of America, Shinnecock Hills, Chicago Golf Club, Newport Country Club and The Country Club.

In addition to the Rivalry Pub, The Club at Lac La Belle honors its history in little ways. The scorecard pencils, for instance, are printed with the words “Lac La Belle 1896.” And anyone who makes a hole-in-one will receive a cool memento – an 1896 British penny in a handsome black case. Three already have been handed out.

“We felt a responsibility to honor the past,” Tyler Morse said. “It’s a big part of what we’re trying to do here, to let people know about the remarkable history of this place. I don’t think a lot of people know about it. This whole clubhouse is going to become a museum, in a way, where people can come here and read about it and experience what the history was back in those days.”

The Club at Lac La Belle is located in the golf-rich Lake Country of southeastern Wisconsin, but is well-positioned to capture market share as an upscale facility with a unique story and a collection of memorable holes. Green fees starting June 20 are $75 for 18 holes walking and $97 riding. After 4 p.m., golfers can play a four-hole loop for $35. Caddies also will be available.

The course is still growing in, there are spots where the turf is thin and the greens are nowhere near as fast as they will be later in the summer. It won’t be long, though, before the “new” Club at Lac La Belle is considered among the finest facilities in Wisconsin.