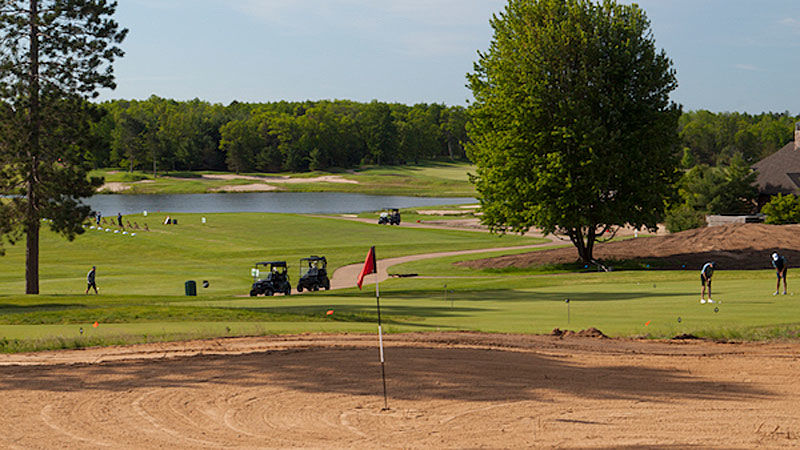 A 10-hole par-3 layout by Keith Rhebb and Riley Johns is being built at Forest Dunes Golf Club in northern Michigan. 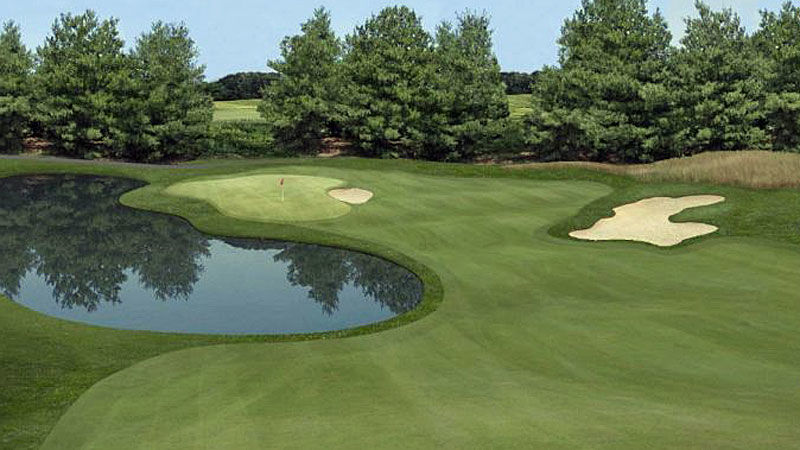 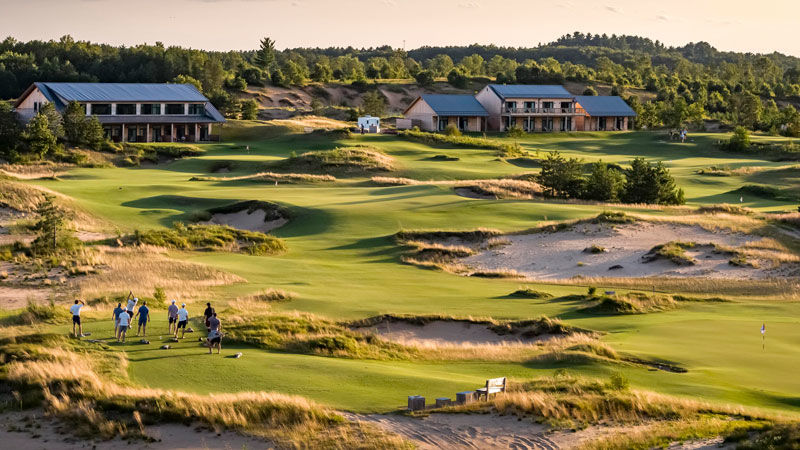 "The Sandbox" is the 17-hole short course at Sand Valley Resort in Nekoosa. It was designed by Bill Coore and Ben Crenshaw. 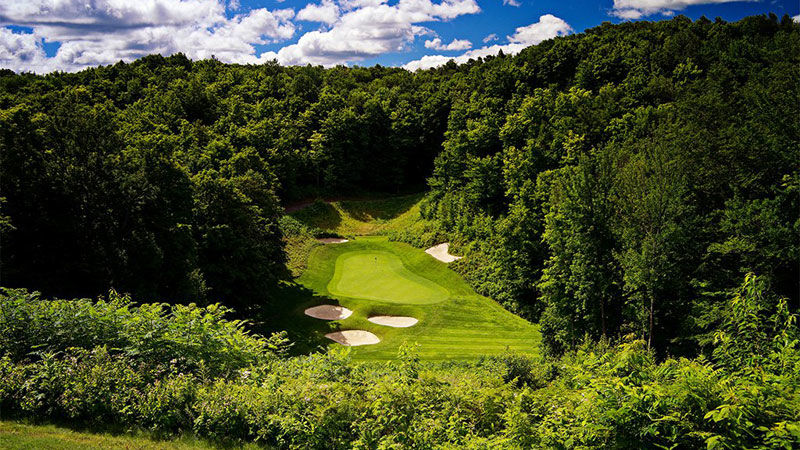 The "Threetops" par-3 course at Treetops Resort in Gaylord, Michigan was once home to the televised Par-3 Shootout and “Big Break” series. 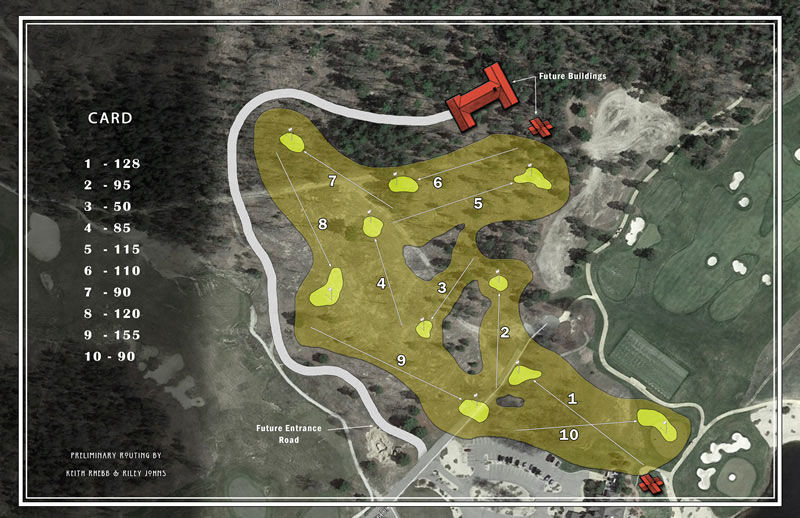 The initial routing of the 10-hole short course at Forest Dunes has holes between 50 and 155 yards.

Lew Thompson is a guy who knows a thing or two about a good time. The swashbuckling, chain-smoking savior of Michigan’s Forest Dunes Golf Club isn’t afraid of making bold decisions in the name of growing the game – and having a heckuva lot of fun doing it. Look no further than the crazy-cool reversible golf course he tapped Tom Doak to design, The Loop, as exhibit A (and, well, B).

But Thompson, who made his money as a trucking magnate, also keeps his eye on the long road ahead in the industry, and increasingly, that means making the game shorter and sweeter to play. The reason’s really pretty simple.

“When you come to Forest Dunes, we want you to have a good time,” Thompson says.

He’s putting money where his mouth is. This summer, Thompson’s Forest Dunes will open its latest incarnation, a 10-hole par-3 course (that’s right, 10), a yet-to-be-named layout built by Keith Rhebb and Riley Johns. The new course is designed as a rollicking good time with holes between 50 and 155 yards, and sits on a rolling tract of land between the original Forest Dunes course and The Loop, close to the clubhouse, practice area and HillTop Putting Course, too.

While they all have their charms, truth be told, the par-3 course is probably the one closest to Thompson’s truest philosophy.

“What Keith and Riley are building is going to bring a new life and energy to the property,” Thompson said — adding he’ll happily allow music, bare feet and even eightsomes on the new course, if that’s what it takes to make the game more accessible and fun. “It’s going to bring people together and make their time more enjoyable.”

Forest Dunes, in northern Michigan, is far from alone, however, and joins the industry’s newfound love affair with shorter, sweeter alternatives to growing the game. Big-name additions to the short course lineup nationwide include Sand Valley Resort’s “Sandbox” course, designed by Bill Coore and Ben Crenshaw, a Gil Hanse-designed par-3 course at Pinehurst Resort called The Cradle and even a Jordan Spieth-designed six-hole course at the University of Texas.

“To help golf course owners drive in more traffic, you have to transition golfers from a tricycle to a motorbike,” said Ray Hearn, the award-winning architect whose work includes redesigns of Flossmoor Country Club and Mistwood Golf Club in Chicagoland and Island Hills Golf Club in southwest Michigan. “Golf is too expensive and difficult to learn, and we need to make it easier.”

Hearn’s innovative adjustments at Island Hills Golf Club are a perfect example, where he designed several short course setups within his original 18-hole routing. His work earned him accolades from the American Society of Golf Course Architects (ASGCA) and has kept his phone ringing with other owners in search of similar, shorter solutions.

“When you get an ASGCA design award, we had people calling us about it,” Hearn explained. “(At Island Hills) we had course markers made up, and wanted to involve the community in it, and let them play a three-hole, a seven-hole east, seven-hole west courses. The trick is air-traffic controlling it, but the technology’s making that easier. A lot of clubs are going to GPS on the carts, and the pro shop can see where the traffic is, and can let a group squeeze in for a quick three-hole, seven-hole round.”

Hearn created a new par 4 and a new par 3 at the course, took two of the former 18 holes out of play and is creating a new state-of-the-art training facility, too. The new range includes target greens and fairways, chipping, putting practice areas and bunkers for both greenside and fairway bunker shot practice.

“We created three new holes at Water’s Edge,” he said. “The highlight is one of the world’s most versatile ranges. There’s a chipping course, a putting course and you can actually play a five-hole par-3 course.

“It’s kind of what Tom Doak did with The Loop at Forest Dunes, this is similar, to have a practice facility with multiple functions.”

Golf’s building boom of the 1980s, ’90s and early 2000s famously went bust, as the oversaturated market course-corrected with course closings outnumbering new openings for the past 10-plus years.

Short courses, alternative setups and range facilities have been all the rage in the industry of late, with no sign of slowing down.

According to the National Golf Foundation's latest numbers, the total U.S. golf course supply declined by 1.2% in 2018, with the opening of just 12.5 new 18-hole equivalent golf courses and 198.5 course closures. Not too surprising, closures have outweighed new openings nationwide since 2006. And yet, par 3 or executive “short courses” are one of the few growth areas in new course construction, as the industry trends toward more affordable, more fun and faster play. There are now roughly 700 par-3 courses nationwide, with another 1,000 courses of the executive variety, with those numbers on the rise.

From an industry perspective, it may be time to strike while the proverbial irons are hot. The number of non-golfers who say they’re “very interested in playing golf” is a record high 14.9 million (an increase from 12.8 million in 2016), according to the NGF. Those who played on a golf course for the first time in 2017 numbered 2.6 million, maintaining a four-year upward trend. The time to create lifelong golfers is now, and the industry can thank the boom in alternative options.

It doesn’t appear to be slowing down, either. Two of the game’s biggest names recently announced a new collaboration of the short course variety: Tiger Woods and Pebble Beach Golf Club. Woods is helping revamp Pebble’s 748-yard Peter Hay Course, a short course that was looking a little long in the tooth.

Other notable new short courses in the Midwest alone include a par-33 nine-hole executive course at Cross Creek Golf Club in Decatur, Indiana, and Andy North and Oliphant Golf are building a short course at Trappers Turn Golf Club in the Wisconsin Dells, too, with an expected opening for preview play this fall. These join other notable short courses in the Midwest that include Treetops Resorts’ sensational “Threetops” par-3 course, once home to the televised Par-3 Shootout and “Big Break” series.

While the building boom may never return to ’80s and ’90s level, we may have a way forward. If you need further evidence, simply turn your attention to Thompson’s rolling terrain at Forest Dunes.

“The land gave us such a great canvas to create something fun,” Thompson said. “A ‘welcoming handshake’ to entry-level players and says ‘this is what golf can be.’ ”