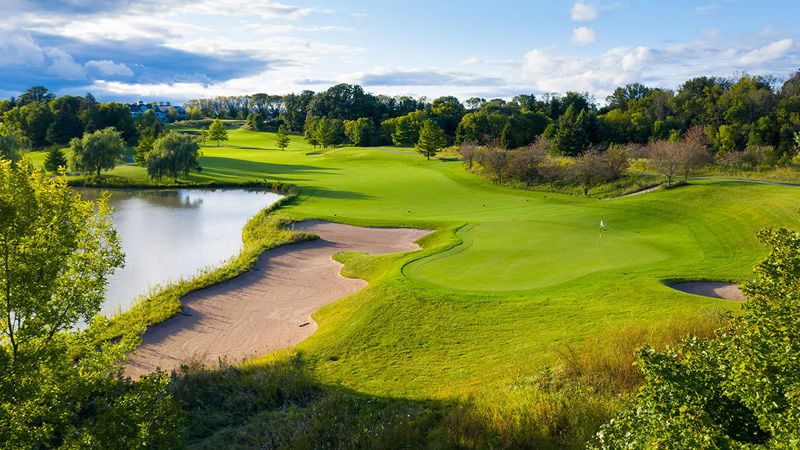 A drone's-eye view of The Bull at Pinehurst Farms. 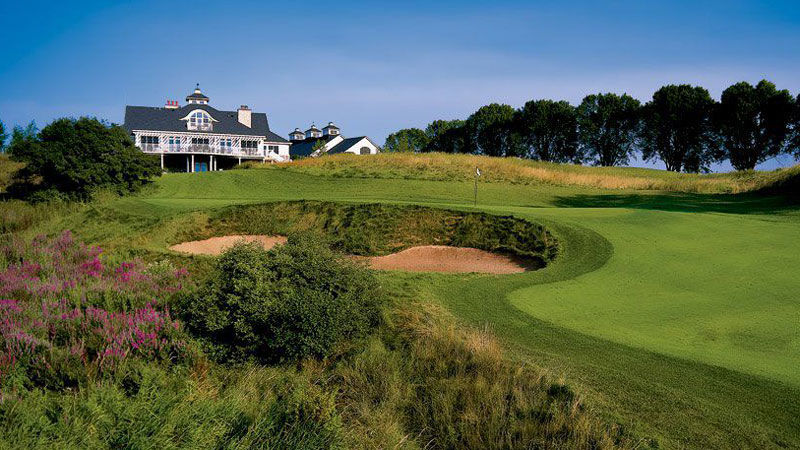 Hole No. 9 at The Bull at Pinehurst Farms with the clubhouse in the background.

One of Wisconsin’s premier public golf courses is facing yet another financial hurdle.

The Bull at Pinehurst Farms in Sheboygan Falls, the first Jack Nicklaus signature course built in the state, is scheduled for a sheriff’s sale on Jan. 28 at the Sheboygan County Courthouse. The sale was set after a foreclosure judgment was entered in October. According to court records, as of Oct. 21 The Bull was in default to Wisconsin Bank and Trust for loans totaling more than $4.2 million.

Although owner David Bachmann Jr. has fended off similar financial challenges in the past, Richard Hahn, attorney for the bank, said “I think it’s highly likely” the sale will go through.

Generally, in sheriff’s auctions the lender submits the winning bid to gain control of the property, but higher third party bids are sometimes accepted as well, according to Gene Wielgosh, the Sheboygan County sheriff’s sergeant who handles civil process and court services.

What all this means for operations at The Bull is unclear. The golf course and restaurant are closed for the season but the pro shop is still open every day, said Chad Sandee, who has been The Bull’s PGA pro since September. As for whether the golf course will open again in the spring, Sandee said, “You know, I don’t know. It all kind of depends on who takes over as an ownership role."

Neither Bachmann nor his attorney could be reached for comment on any plans to try and retain control. The Bull has faced similar challenges in the past. In 2011 Bachmann also faced foreclosure but managed to retain ownership and keep the golf course in business.

The Bull, as it is known for short, is the perfect name for a golf course built on the site of historic Pinehurst Farms, which for many decades had raised national champion-caliber Holsteins that won awards at a number of major cattle competitions. In 1993 fire destroyed the main barn at Pinehurst Farms and the remaining cattle were moved to another property.

It was a devastating end to the Pinehurst program, according to a history on The Bull’s website, but “it did allow for another dream to be realized ... the building of a championship-caliber golf course that would showcase the beauty of the terrain and allow the rich history of Pinehurst Farms to be preserved and shared with others.”

The site was terrific – just over 400 acres of land that included thick woods, wetlands, Onion River frontage and a steep ravine – and Bachmann was reported to have directed architect Jack Nicklaus to “build the best course possible.”

When it opened in 2003 – each of its 18 holes named for one of Pinehurst’s prized bulls – the course was deemed so good that its first pro declared it worthy of hosting a U.S. Open. That didn’t happen, but The Bull has hosted a number of high-level state tournaments and has been listed prominently on dozens of national golf course rankings, including number 70 on America’s best public courses by Golf Digest for 2015-16.

Initially, Bachmann expected The Bull to benefit from spillover play from the heralded courses owned by Kohler, including the two golf courses immediately adjacent to The Bull at Blackwolf Run. Green fees at The Bull were lower than those at the Kohler courses but still meant a pricey day of golf for the average Wisconsin golfer. In 2019 the peak summer green fee was $150 for 18 holes, though twilight and sunset rates were lower.

The competition for high-end golfers has also increased since The Bull opened, given the development of attention-getting courses at Sand Valley Golf Club in Adams County and Erin Hills Golf Club, which did host a U.S. Open in 2017.

Sandee, who took over after the retirement of former PGA pro Scott Evans, said employees are waiting to see what will happen to the golf course and, of course, to their jobs.

“Hopefully it all works out,” he said, “and there won’t be too many changes.”