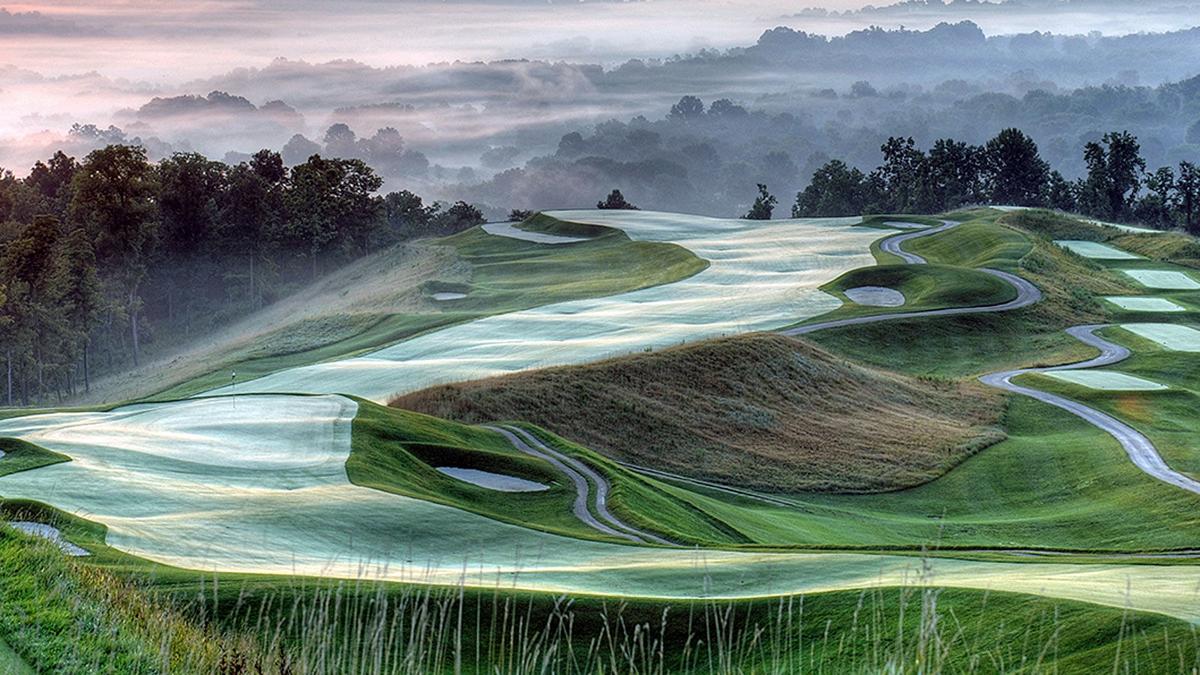 When Pete Dye was hired to design the course, he visited the property and said it couldn’t be done. The terrain was too severe for golf. He later changed his mind. 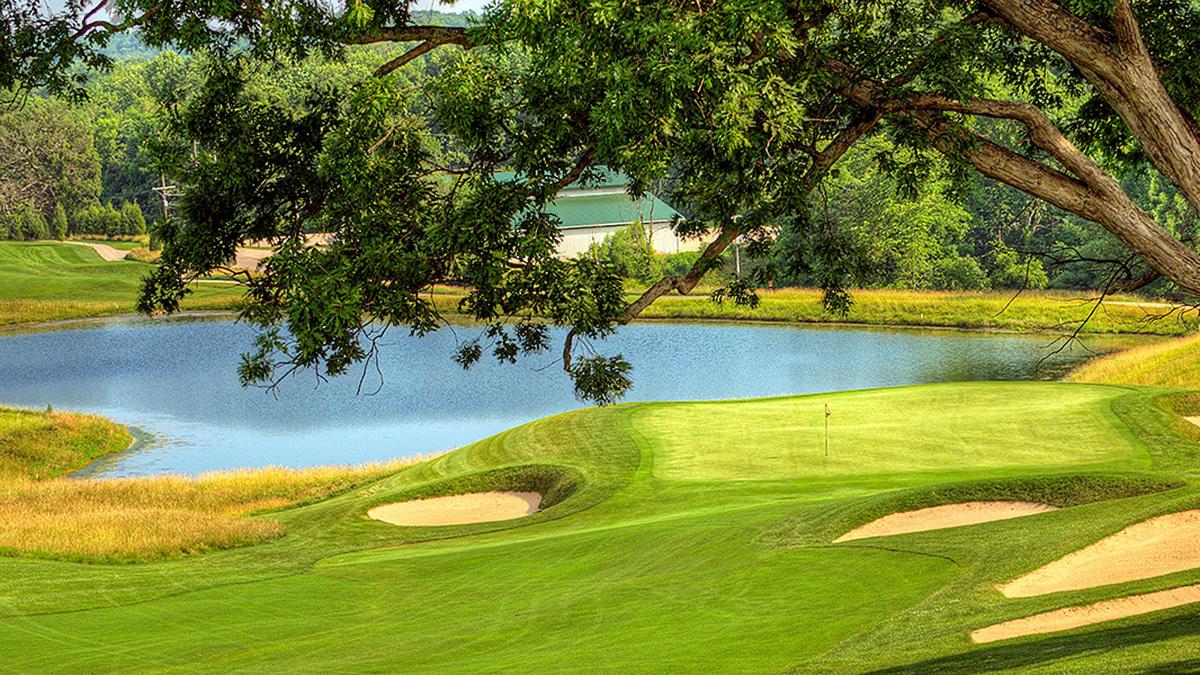 The Ross Course is a links-style course that spills up and down hills and has huge, severely sloped and multi-tiered greens. 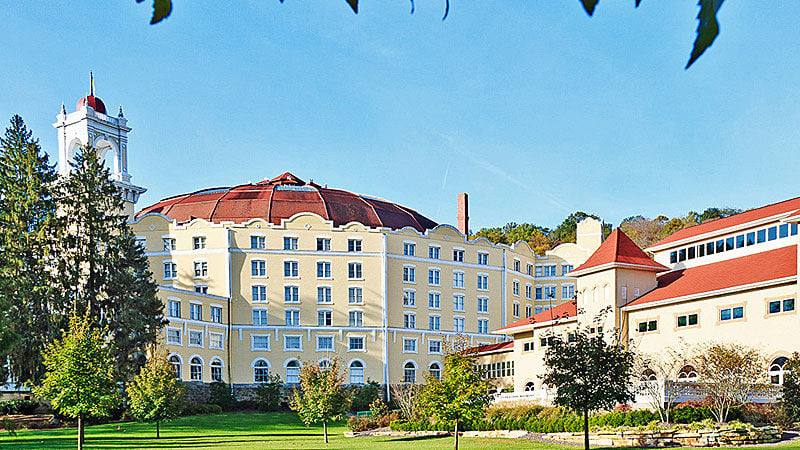 The resort was fashioned after Baden-Baden, the great mineral spa of Europe. 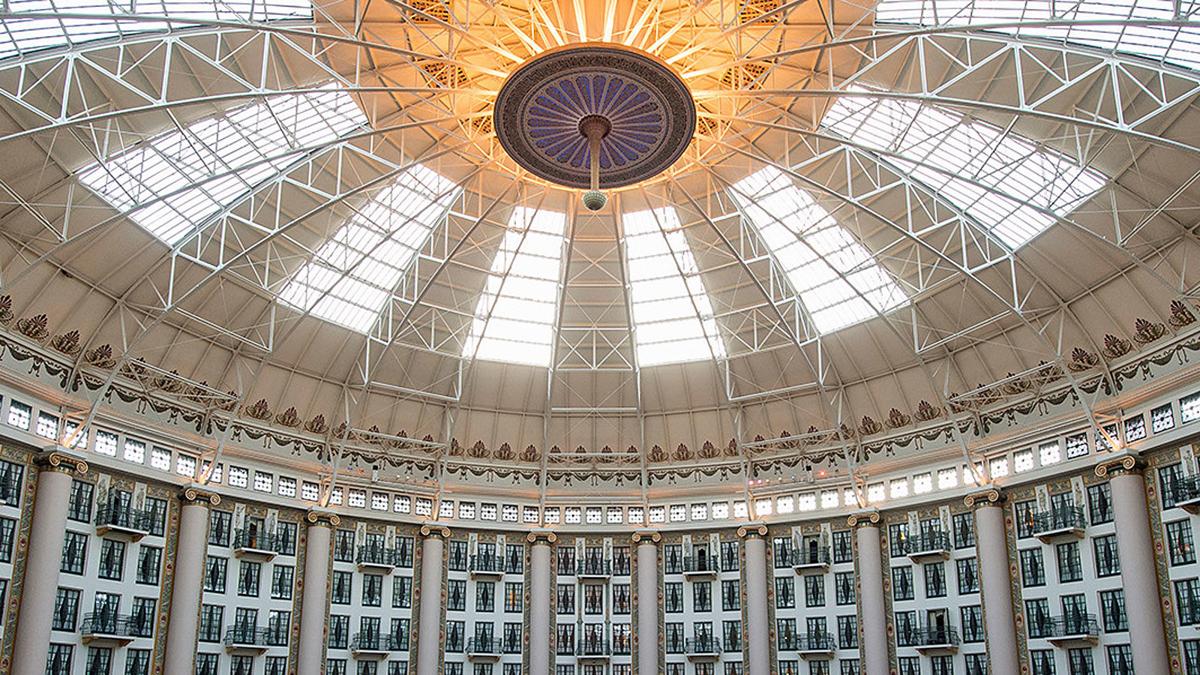 The West Baden Springs Hotel was called the “Eighth Wonder of the World” when it opened in 1902 because it boasted the (then) largest free-span dome in the world. 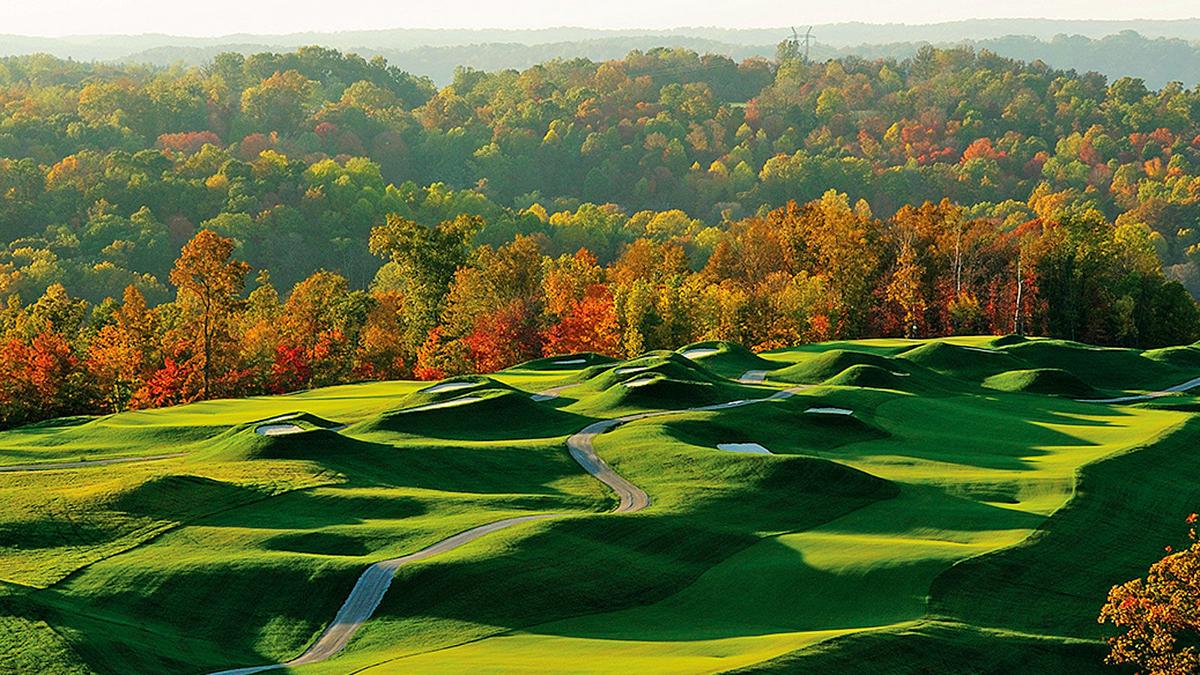 The Dye Course was built on the highest point in Indiana and offers panoramic views of the Hoosier National Forest.

FRENCH LICK, Ind. – One of the great attractions of the French Lick Resort is the wonder of the unexpected.

You don’t expect to find world-class golf, a pair of AAA Four Diamond hotels, a casino and 21st-century amenities miles from the nearest freeway, in an otherwise sleepy burg in the rolling hills of the Hoosier National Forest.

The sprawling French Lick Resort is nearly as big as the southern Indiana towns it straddles, West Baden and French Lick, which makes it – like the basketball Hall of Famer who hails from these parts – something of an incongruity. They didn’t call Larry Bird “the hick from French Lick” because he came from a teeming metropolis.

The nearest major airport is Louisville International, some 85 miles away, and the drive into French Lick is a twisty two-lane road, interrupted by small towns such as Paoli, with its “Back to the Future” town square. Then suddenly, there it is, an Oz-like resort that leaves first-time visitors awestruck.

“It’s kind of a hidden gem in the middle of nowhere,” said Kristal Painter, executive director of Visit French Lick-West Baden. “You’re driving and you’re thinking, ‘Where am I going?’ Then when you get into town, you’re like, ‘Why is this here?’ ”

It’s here because the Cook Group spent $600 million on what has been called the largest private restoration project in America, all in the name of escapism for golfers, gamers and vacationers with no agenda other than to relax, have fun and be pampered.

“It’s the only destination in the country that has all three golf architects: Tom Bendelow, Donald Ross and Pete Dye,” Painter said. “So, we’re one of a kind in that regard. It’s hard to come here and play one and not play the others.”

The Dye Course was built on the highest point in Indiana and offers panoramic views of the Hoosier National Forest and, far below, the town. Arrive at sun-up and drive through morning mist up, up, up to the clubhouse, as I did on a visit last summer, and you’ll think you’ve died and gone to heaven.

When Dye was hired to design the course, he visited the property and said it couldn’t be done. The terrain was too severe for golf.

“He told us point-blank that you couldn’t build a golf course up on that hill,” said Dave Harner, the PGA director of operations at French Lick Resort. “Then he changed his mind a couple of days later.”

Dye studied topographic maps, figured out a way to route 18 holes and sketched them on a napkin in a nearby restaurant. Then the bulldozers went to work.

Like most Dye courses, this one is visually intimidating, starting with the opening tee shot to a ribbon of fairway far below and finishing with a mind-blowing par 5 built terrace-like into the side of a monstrous hill. From the tee box, it looks like a triple-bogey waiting to happen.

In fact, all the holes on the Dye Course appear to invite disaster, but they are eminently playable from the fairway. Almost every green can be accessed by a run-up shot.

“Pete is an absolute master at visual deception,” Harner said. “You get out there and you look back at the tee and you go, ‘It’s not as tough as it looked from the tee box.’ ”

Make no mistake, though, the Dye Course is not for the beginning golfer. Misses are punished, sometimes disproportionately, by steep fall-offs and difficult lies in thick rough. The course measures 8,108 yards from the back tees, with a course rating of 80 and a slope of 148. Not even Brooks Koepka would play it from back there.

Thankfully, there are four other sets of tees and the course can play as short as 5,151 yards. I found it to be a blast, in a masochistic kind of way, from 6,115.

If you’re a 15-handicapper, forget about trying to break 100. Just bring a camera and enjoy the breathtaking views. You won’t regret it, even at $350 for unlimited play (plus $30 per person for a forecaddie, an absolute must).

“The thing that’s great about it is you don’t really have to play well to enjoy it because it’s such a scenic golf course,” Harner said. “As long as you keep the ball in front of you, keep it in play, you’ve got an opportunity to score.”

The Ross Course is equally dramatic, but in a different way. It’s a links-style course that spills up and down hills and has one of the coolest sets of green complexes anywhere. They are huge, severely sloped and multi-tiered, and reward short-game skill and imagination. Good chippers and putters, and fans of Ross’ work in general, will absolutely love the place.

“Anybody’s in the game up there because you can make up for a lot of distance with a good short game,” Harner said. “I guess that’s probably true of a lot of golf courses, but there especially. If you have a weak short game, it’ll show up quickly there. If you get on the wrong section of the green or you miss the green in the wrong spot, it’s really tough to get it close with a chip.”

Be sure to check out the photograph of the 1924 PGA Championship field just inside the clubhouse door. A smiling Hagen appears on both ends of the photo because he had enough time to run from one side of the frame to the other while the camera aperture was open.

The Dye and Ross courses have been voted Indiana’s Nos. 1 and 2, respectively, on Golfweek’s Best You Can Play list every year since 2011.

The resort also has played host to the women’s Symetra and Legends tours.

“We feel the women’s sector of golf is the opportunity for growth,” Harner said. “Women make a lot of the decisions about what to buy, where to go, where to vacation. So, we want to be at the top of their list.”

The Valley Links is a walkable nine-hole conversion of Bendelow’s original 18-hole course, reimagined with families in mind. The rate in 2019 was $30 for nine holes and $45 to go around twice; children 12 and under play free of charge.

After golf, guests can retire to either of the luxury hotels, the West Baden Springs Hotel or the French Lick Springs Hotel.

The West Baden Springs Hotel, built in 1902, is a National Historic Landmark and was called the “Eighth Wonder of the World” when it opened because it boasted the (then) largest free-span dome in the world. It features a stunning 200-foot atrium and 243 luxury guest rooms and suites.

The opulent hotel once had an opera house, a double-decker pony and bicycle track and a baseball field (where the Chicago Cubs trained from 1906 to 1911). After the stock market crash of 1929, the West Baden Springs Hotel was sold to the Society of Jesus for $1 in 1934. Northwood College was the next tenant, from 1967 to 1983, and then the hotel sat unoccupied for 13 years.

After part of the hotel collapsed in 1991, it was placed on the National Trust’s list of the 11 most endangered historic properties in the United States. It was then that Indiana Landmarks, the largest nonprofit preservation group in the nation, partnered with philanthropists Bill and Gayle Cook to restore the hotel and the neighboring French Lick Springs Hotel.

The French Lick Resort Casino reopened on Nov. 3, 2006, and the West Baden Springs Hotel reopened seven months later. In December, 2019, the resort opened the $21 million, six-story Valley Tower, a 71-room hotel located adjacent to the 51,000-square-foot casino. That brought the total number of hotel rooms at the resort to 737.

With 1,700 employees, the French Lick Resort is the largest employer in Orange County and one of the largest in the region. The population of French Lick was 1,807 in the 2010 census.

“If you don’t work at the resort,” Painter said, “someone in your family probably does.”

A century ago, visitors arrived by train from Chicago to bathe in the mineral waters. Indeed, the resort was fashioned after Baden-Baden, the great mineral spa of Europe. It still retains its old-world charm, right down to the brick-paved entrance to the West Baden Springs Hotel, the meticulously maintained grounds and the horse-and-buggy rides.

“What I like to say is that our storied past is your next great adventure,” Painter said. “You come for the history, but the world-class pampering you can get makes it the best of both worlds. The hotels were built for the waters and people came for the waters, and in a roundabout way they still do.”

But now, they’re bringing their titanium drivers and graphite-shafted irons.