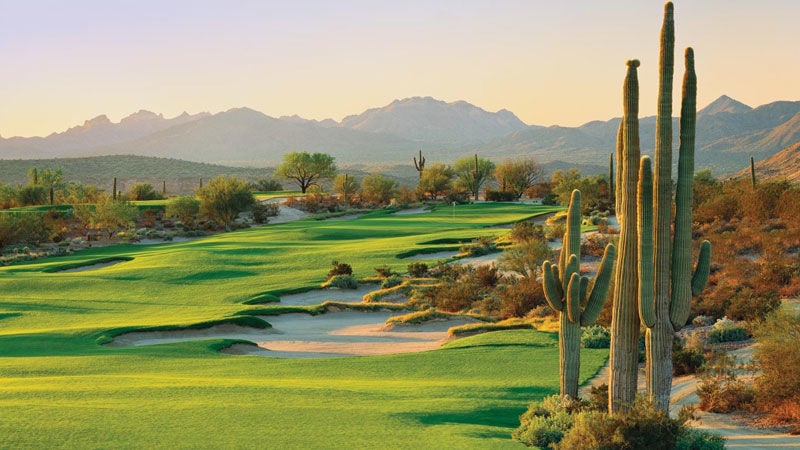 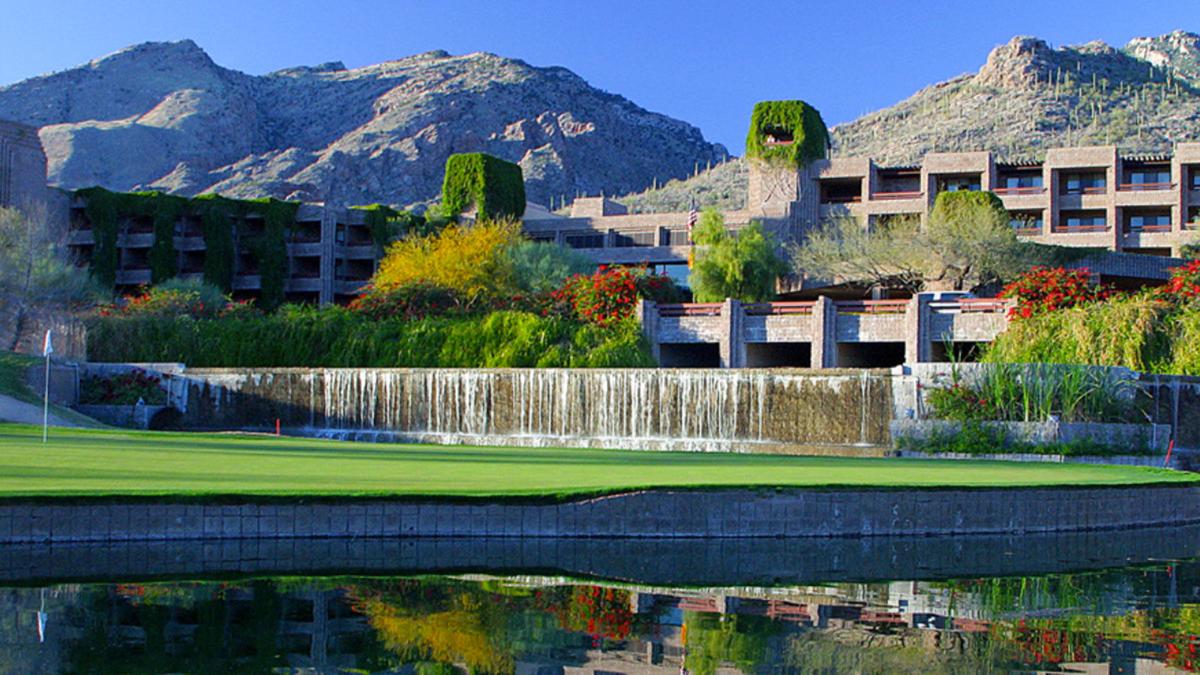 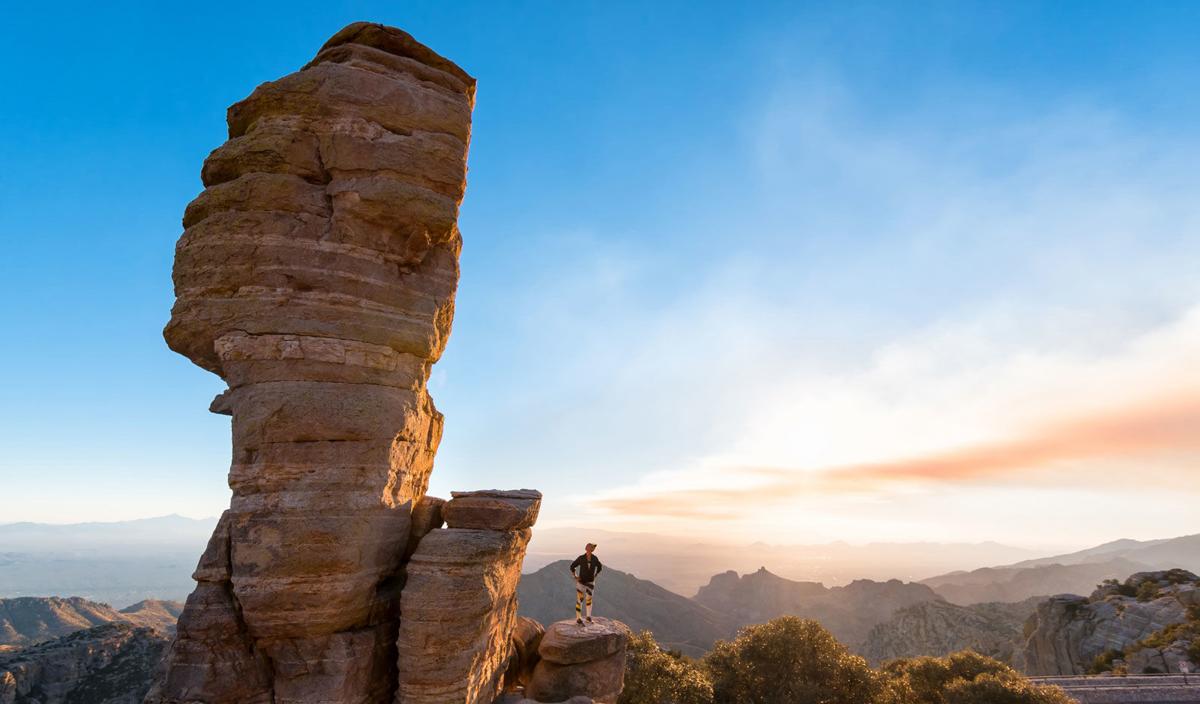 The view from Mount Lemmon is worth the hike.

TUCSON, Ariz. – By their shirts you shall know them.

The man ahead of me at the pro shop counter at Arizona National Golf Club was wearing a University of Wisconsin golf shirt, so I gave him the subtle home state nod.

As I approached the putting green, two guys in a cart headed for the first tee braked sharply when they saw me. “Wisconsin?” the driver asked, perhaps clued in by the “Wisconsin.Golf” logo on my shirt or my more obvious Bucky driver cover.

“Yes,” I said, unnecessarily at that point.

“New Berlin,” his passenger said. “Bayfield,” my wife replied, and after a few minutes of small talk about how fine desert weather beats snow and ice at home they drove off, all “pleased to meet you” and “play well.”

Moments later we teed off in the company of a couple named Marilyn and Dan, who sported both Green Bay Packers driver covers and towels despite hailing from Waterloo, Iowa.

Close enough. By their head covers you shall know them, too.

There are lots of reasons golfers from the wintry Midwest seek out the green courses of Tucson, and the words polar and vortex are only two of them. Smaller than sprawling Phoenix to the north, Tucson offers desert beauty in every direction, reliably beautiful weather and abundant golf that knows no season. A few days earlier we had played Crooked Tree Golf Course, a municipal course designed by Dave Bennett and Lee Trevino, which declares on its website that it is “open every day of the year, sunrise to sunset.”

Golf. Every day of the year. Can you imagine?

For visitors there is more than just golf, of course. Over nine days last March we hiked in the Coronado National Forest, toured historic sites, spent a day at the wonderfully informative Sonoran Desert Museum, visited Arizona’s oldest church and the Casa Grande Ruins National Monument, drove (almost) to the top of Mount Lemmon and had more than our fill of authentic Mexican cuisine. We watched Badger basketball in the company of the Tucson chapter of the Wisconsin Alumni Association (joining a roomful of strangers for an arm-in-arm “Varsity” to celebrate victory) and met with friends from Wisconsin who just happened to be in Tucson at the same time.

But we were there for golf, after all, so let’s start there. Arizona National, a Robert Trent Jones Jr. design that opened in 1996 and has been on many “top course” lists, is something of a classic desert layout. Set in the foothills of the Santa Catalina Mountains and abutting the Coronado National Forest, it boasts panoramic mountain views and long gazes at downtown Tucson while winding through vast expanses of desert vegetation and giant saguaro cacti, some pocked with mishit golf balls. (Harming or vandalizing a saguaro is illegal under Arizona law, but bad golf shots are apparently another matter.)

Arizona National has hosted a number of NCAA events and until recently was home course for the University of Arizona, which explains the giant white letter A on the 18th hole. As we had been warned by our new friends from New Berlin and Sheboygan, it was a demanding test that would require more than a couple of golf balls but would offset the losses with its beauty – and it did.

There are more than 40 golf courses in the region, ranging from once-in-a-lifetime bucket list layouts to a handful of more ordinary municipal courses.

Perhaps most well known are the two Tom Fazio-designed courses at the Lodge at Ventana Canyon, the Canyon and Mountain layouts that consistently rank among Arizona’s best golf offerings. The Mountain features what is called the most photographed hole in the Southwest, a short par 3 set into the rocks of the Catalina Mountains that demands a shot across a canyon of cacti.

The Jack Nicklaus-designed La Paloma Country Club offers three nine-hole layouts that similarly take advantage of the Catalina Foothills’ hills, canyons and ridges. The local visitor guide repeats local lore that when Nicklaus first visited to discuss his design his hosts did not show him a very good time, so he got revenge by making La Paloma more challenging than usual. Serious golf geek film fans may remember the course featured in “Tin Cup” in the scene where Kevin Costner’s Roy McAvoy had to carry his own bag after his caddie suffered heat exhaustion.

A more recent addition to Tucson’s top end golf offerings is Sewailo Golf Club, set not against the mountains but instead in the open desert on the city’s southwest side. When it opened in 2015 the design by Ty Butler and Notah Begay III drew raves from golf course critics for its use of more than 40,000 native plants and 14 acres of lakes.

The Omni Tucson National’s Catalina Course, now home of the PGA Tour Champions Cologuard Classic event each March, was the site of Phil Mickelson’s first PGA Tour win. Both the Catalina and its companion Sonoran course are open for resort and daily-fee play.

Also highly regarded are Starr Pass, another desert beauty by Bob Cupp, Ed Seay and Arnold Palmer, and The Preserve, set within the sprawling Saddlebrook retirement community with stunning views of the Oro Valley side of the Catalina Mountains.

History gets its due, too

One morning we took a break from golf and made a stop at the Hotel Congress, which was celebrating its 100th birthday. It opened in 1919 to serve visitors arriving on the Southern Pacific Railroad and through the years has hosted luminaries ranging from Bo Diddley to John Dillinger, who with his gang was captured by lawmen without firing a shot in 1934. It was Dillinger’s bad luck to be staying at the Congress the night fire broke out; he was recognized by firefighters during the hotel’s evacuation and then grabbed up by police, an event celebrated annually at the Hotel Congress during Dillinger Days. The Congress is still the hub of downtown music and nightlife, but the historic lobby is worth a walk-through at any time of day.

We experienced much older history at Mission San Xavier del Bac, established by the Jesuit priest Eusebio Francisco Kino, founder of a string of Spanish missions in the Sonoran Desert. The original church was begun in 1700 but burned 70 years later, so the existing church was built to replace it in 1797. It is open for tours, and hosts thousands of visitors annually, but is also still used as the church for members of the Tohono O’odham Nation on whose reservation it sits.

Perhaps the city’s most popular visitor destination is the terrific Arizona-Sonora Desert Museum, which combines zoo features and botanical gardens to educate the community and its guests about the desert and its natural inhabitants. The 98-acre site within Tucson Mountain Park includes walking paths, gardens, an aquarium, and critters galore; if your kids are pleading to pet a snake or see bobcats and wolves up close, set aside a day for exploration of the desert museum.

The first time we tried to drive up Mount Lemmon we were stopped by sheriff’s deputies whose duty was to warn motorists that heavy snow – up to a foot and a half – had fallen the day before and only vehicles with chains or four-wheel drive could attempt it. One deputy looked at my Wisconsin license plate and said he knew I could handle driving in the snow, until I pointed out it was driving too often in snow that had brought us to Tucson. A few days later we returned and did make the drive, losing about 30 degrees from bottom to near the top but not encountering snow.

About an hour south of Tucson, Tubac is another popular visitor destination for its history as an artists’ colony and for the shops where many share their wares yet today. Here you will find jewelry of locally mined turquoise, southwestern art, a variety of casual restaurants and Tubac Presidio State Historic Park, a Register of Historic Places site that was both the first Spanish presidio, or fort, and Arizona’s first state park.

Not to mention, you will also find Tubac Golf Resort and Spa, a luxurious Spanish-style resort with 27 holes of golf, lodging and spa located on the historic 500-acre Otero Ranch. A little oasis in the desert, you might say, but with golf.