Wanaki Golf Course in Menomonee Falls, bleeding red ink for years and saved from closure at the end of the 2019 season by an extraordinary grass-roots effort, will soon have new owners.

On Tuesday, the Waukesha County Board unanimously approved the sale of the popular 18-hole course to Storm family members Tim and Laura (Storm) Sullivan and their son-in-law, Scott Schaefer. The Storm family has owned and operated golf courses and practice facilities in the greater Milwaukee area for nearly 70 years. 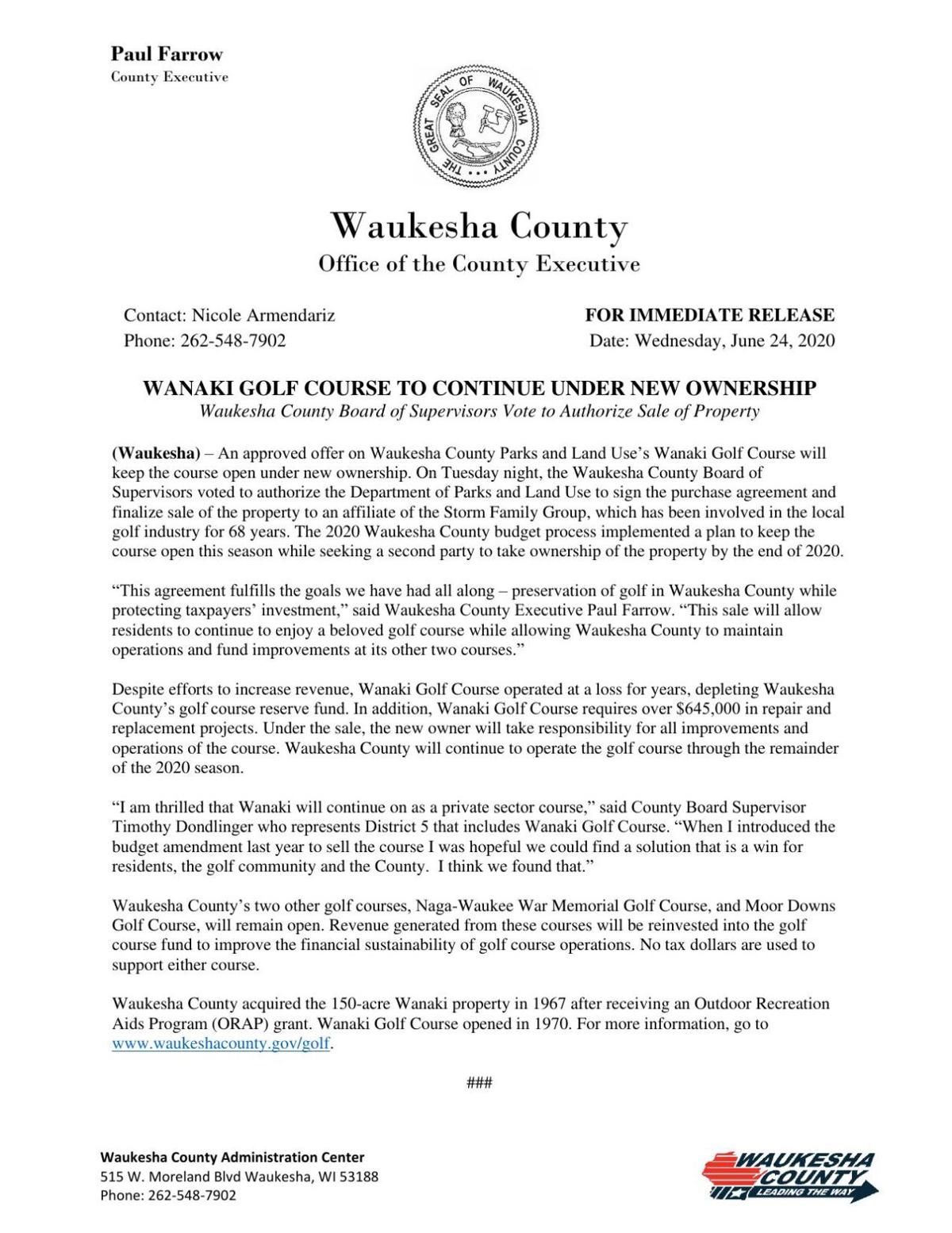 The Sullivans currently own and operate two executive courses – Brookfield Hills Golf Course and Missing Links in Mequon – plus the nine-hole St. John’s Northwestern Golf Course in Delafield. They also own Storm’s Golf Range, which has locations in Oconomowoc and Brookfield.

“It’s a golf course that we’ve played for a long time, living in Brookfield and being in the golf business,” Schaefer told Wisconsin.Golf. “We went out there and viewed the space and we thought it was a great opportunity and a fair value, and we think we can run it better than what Waukesha was doing as a county.

“We believe with our touch of running golf courses and driving ranges and my touch of running bars and restaurants, I can put a food and beverage program together for (the Sullivans) and they can run the golf course side of things. We’re really excited. The support we’ve had from Wanaki and different groups, we know there’s a very high level of interest in keeping it a golf course and we want to provide that for many, many years to come.”

Waukesha County will continue to operate the course through Nov. 1.

If Wanaki had not sold by June 30, the county would have had to sell the property for the highest price and best use. According to the grass-roots group Save Wanaki, there were nine bids. The group organized an email campaign to urge the county not to approve the sale to a residential developer.

“We had no idea if our bid was going to get it or not,” Schaefer said.

Asked if the sale to the Storm family was the best possible outcome, County Supervisor Timothy Dondlinger, who represents residents near the golf course, said, “Clearly, it was. It’s a win for the county. I think it will certainly serve the course better than what the county was able to do.”

Wanaki was set to close after the 2019 season after County Executive Paul Farrow did not include funding for its operation in the 2020 budget. Dale Shaver, director of the Department of Parks and Land Use, said the course had annual deficits ranging from $41,000 to $243,000 over the last decade.

Shaver also said the course needed $645,000 in infrastructure repairs and upgrades, such as a new clubhouse roof and parking lot re-paving.

After hundreds of residents protested and more than 6,000 golfers signed a petition on change.org, county supervisors voted to keep the course under county operation for one more year when they passed the 2020 budget in November.

Before opening the bidding process for the sale of Wanaki, the county sought to lease the course but received only one proposal, which was rejected.

Schaefer said the Storm family would begin to make improvements to Wanaki in 2021, starting with upgraded food and beverage service.

“We think the golf course is actually in great shape,” he said. “We just want to keep it up to the level it’s at now. We definitely want to expand on the food and beverage side, have better food and then also we want to get a liquor license and maybe build a bar. We want to bring those two together. Right now, we think it has a great golf program but it lacks on the other side.”

Said Dondlinger, “I think the improvements they’re planning on making, the enhancements to the food and beverage operation, will really ratchet up Wanaki to the next level. ... They’re going to be able to do things that the county wasn’t able to do.”

Schaefer said the new owners haven’t had conversations yet about staff, or whether current Wanaki employees would be retained.

“We’ll listen to everyone,” he said. “There’s some people there that we definitely want to work with.”