As Craig Czerniejewski was on the phone Friday afternoon, the other lines were ringing in the background. Golfers were calling the head professional at Washington County Golf Course in Hartford eager to get a jump on playing golf ahead of the rest of the state. 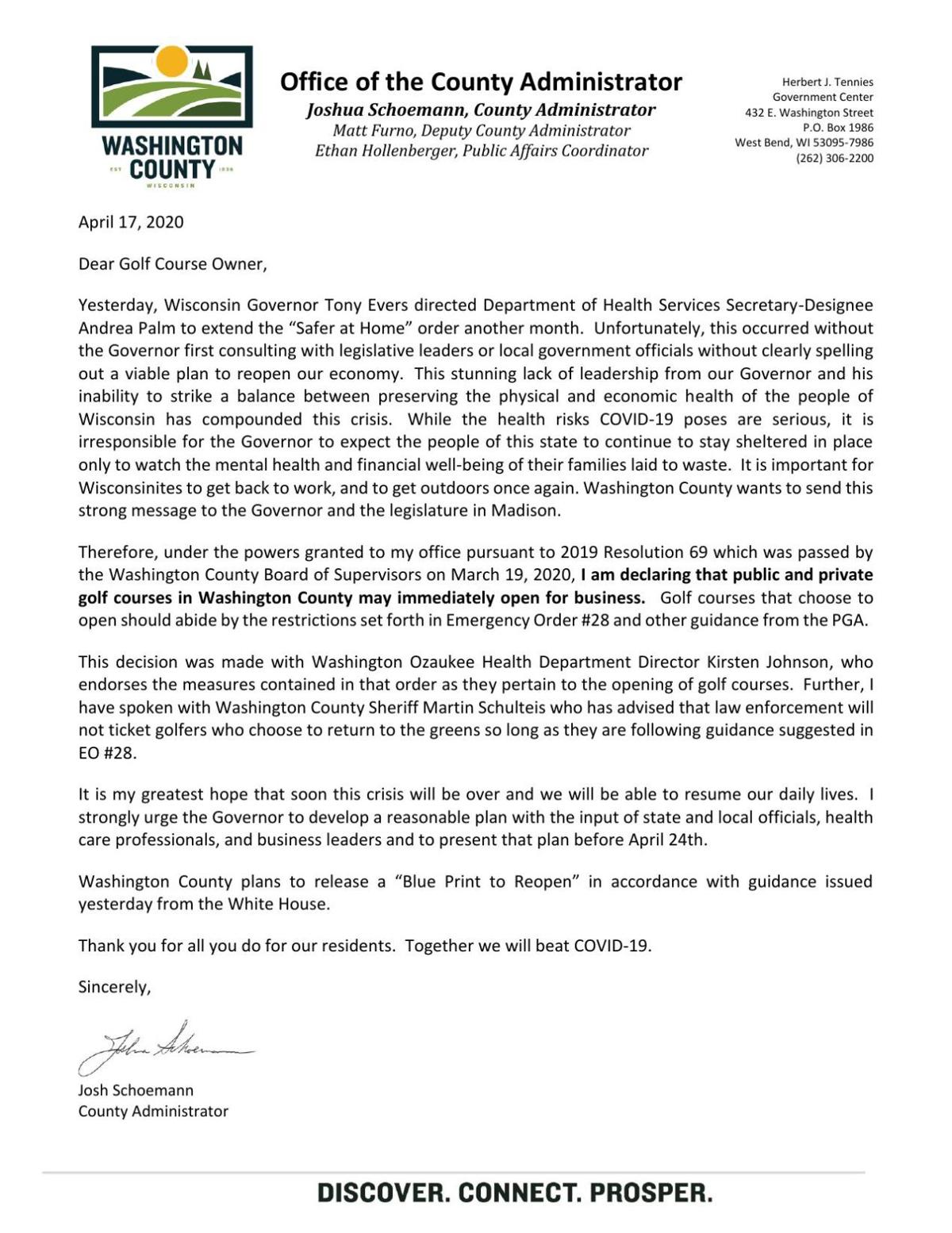 "As you can tell," he said amid the chirping, "I have three lines and they're all ringing right now."

Golf courses across Wisconsin, closed for the past month by Gov. Tony Evers' "Safer At Home" order in wake of the COVID-19 pandemic, were given the authority Thursday to reopen next Friday when the extension of that order goes into effect. However, Washington County administrator Joshua Schoemann took issue with the  governor's extension and on Friday posted a letter to golf course owners on the county's website saying public and private golf courses in his county could open immediately, with restrictions set forth in the governor's order.

That turned just another quiet day during the coronavirus hiatus into one bustling with activity. Moreover, Schoemann's declaration put golf course owners in his county in the crossfire of what could turn into a political battle with statewide implications.

Schoemann, a Republican, was announced this week as the winner of the election to become Washington County's first county executive. His current role as county administrator was an appointed position.

Evers, a Democrat, is in his first term as Wisconsin's governor.

"Wisconsin Governor Tony Evers directed Department of Health Services Secretary-Designee Andrea Palm to extend the 'Safer at Home' order another month," Schoemann's letter read. "Unfortunately, this occurred without the Governor first consulting with legislative leaders or local government officials without clearly spelling out a viable plan to reopen our economy. This stunning lack of leadership from our Governor and his inability to strike a balance between preserving the physical and economic health of the people of Wisconsin has compounded this crisis.

"While the health risks COVID-19 poses are serious, it is irresponsible for the Governor to expect the people of this state to continue to stay sheltered in place only to watch the mental health and financial well-being of their families laid to waste. It is important for Wisconsinites to get back to work, and to get outdoors once again. Washington County wants to send this strong message to the Governor and the legislature in Madison."

Erin Hills, site of the 2017 U.S. Open and also located in Washington County, confirmed via social media Friday that it will not open until May 18.

Despite the green light to open for play, golf course owners and managers in Washington County were admittedly nervous that doing so against the terms of the governor's order could impact the statewide opening Friday. In other states in which golf course restrictions were relaxed, such as Illinois, they were tightened just as quickly following abuses of the statewide order.

Chris Goodwick, the head professional at Hartford GC, said he was in the process of programming his tee sheet with starting times spaced further apart per the governor's order in anticipation of next week's opening when a representative of Schoemann's office called and read him the letter. Goodwick admitted he didn't know what to think when told his semi-private club could open right away and doubted his course would open before Monday, at the earliest.

"I was taken back for a second," Goodwick said. "I replied 'You mean before Friday?'"

Schoemann's letter indicated the decision was made with the endorsement of Washington/Ozaukee Health Department director Kristen Johnson. It went on to say that he secured the assurance of Washington County Sheriff Martin Schulteis not to ticket golfers for being on county courses that reopen ahead of the governor's order, provided they follow guidance outlined in the Evers' order allowing courses to reopen.

"It is my greatest hope that soon this crisis will be over and we will be able to resume our daily lives," Schoemann wrote. "I strongly urge the Governor to develop a reasonable plan with the input of state and local officials, health care professionals, and business leaders to present that plan before April 24."

Schoemann indicated Washington County will reveal a "Blue Print to Reopen" plan similar to the one issued Thursday by President Donald Trump.