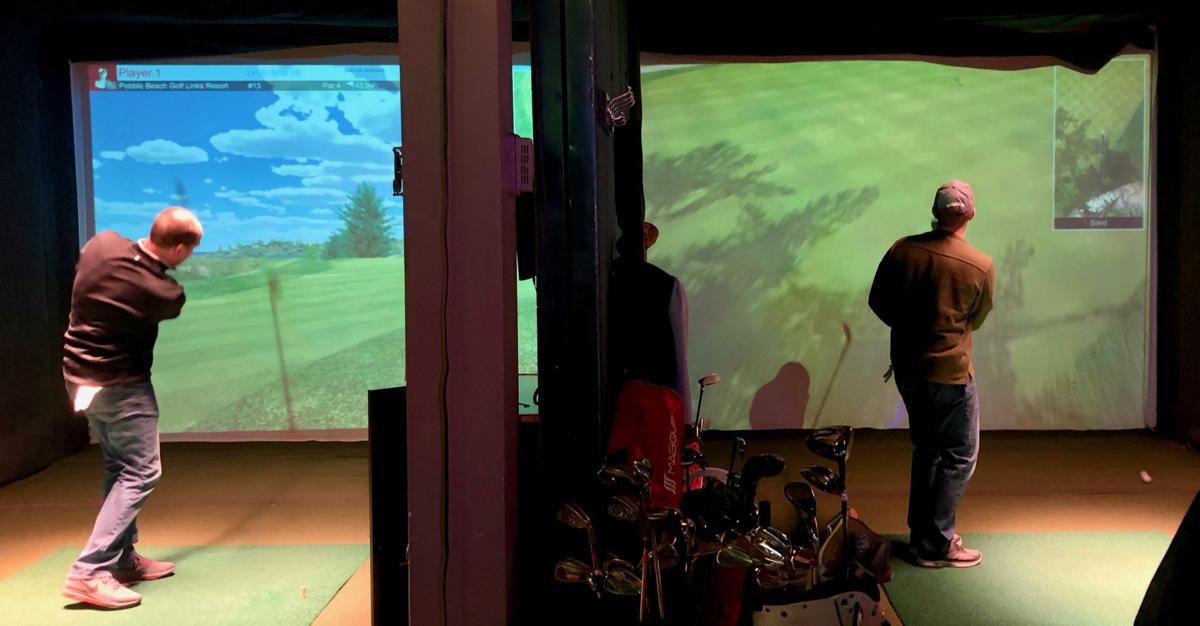 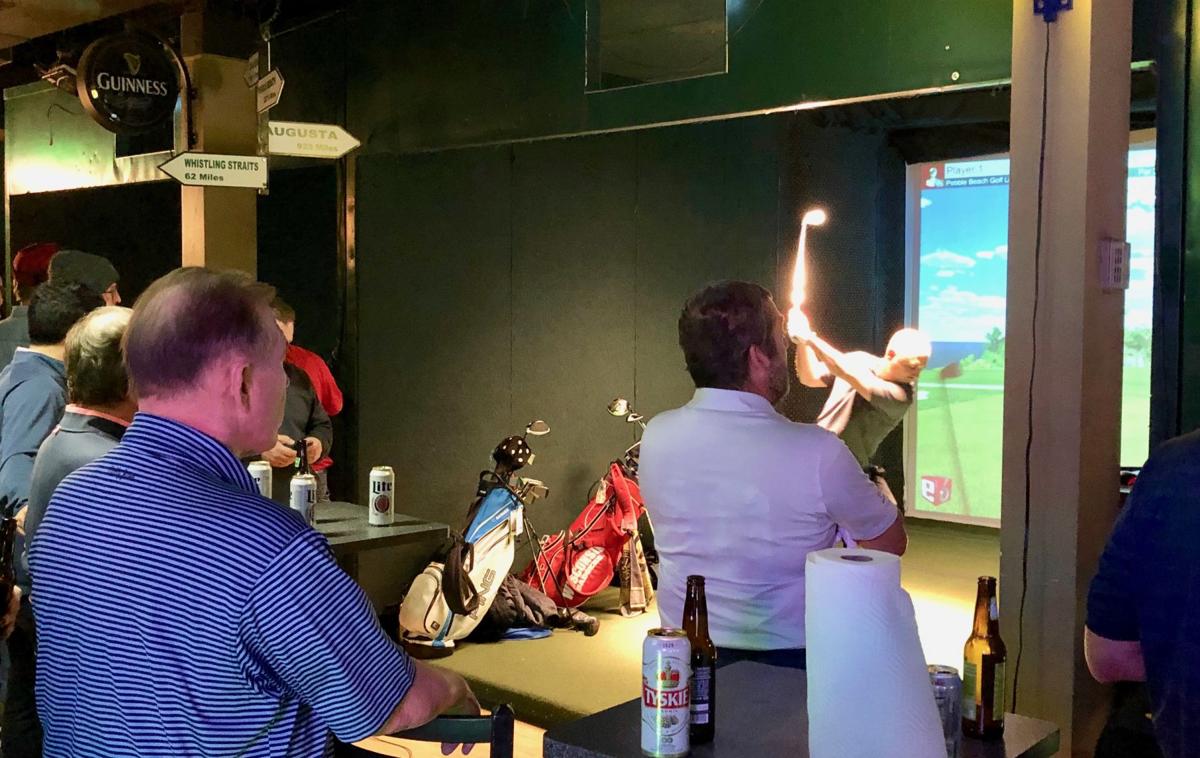 Members of the Brown Deer Park Men's Golf Club pack Fore! Milwaukee on a recent Saturday to play simulated rounds at courses such as Pebble Beach. 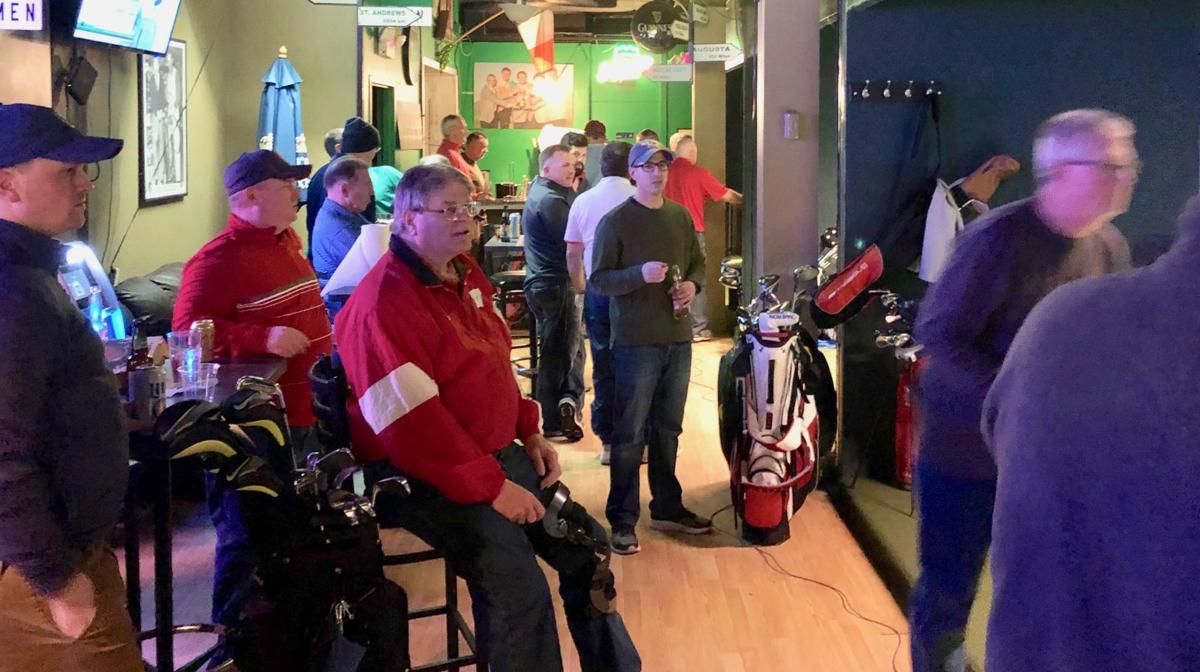 Members of the Brown Deer Park Men's Golf Club pack Fore! Milwaukee on a recent Saturday to play simulated rounds at courses such as Pebble Beach.

Tim Grogan is in the golf business in Wisconsin, so he hopes winter drags on for a couple more months, the snow doesn’t melt until April and spring is unseasonably cold and rainy.

“I always kind of hope for a bad spring,” Grogan confessed. “We kind of like it when it’s 20 to 35 degrees and the courses aren’t open yet.”

An explanation is in order. For the owner of Fore! Milwaukee, an indoor golf center located on Water Street in the heart of downtown, good weather is bad for business. When it’s 75 and sunny, golfers don’t want to play or practice indoors on simulators, no matter how realistic the graphics. They’re teeing it up on real courses.

But with snow blanketing Wisconsin in late February, 75 and sunny isn’t happening anytime soon. And business is booming at Fore!

“It builds from January and February through March and April,” said Grogan, a PGA professional and the former men’s golf coach at Marquette University. “Either people are going on a trip somewhere or they’re itching to play. Really, February, March and April are the high months.”

On a recent sub-freezing Saturday — has there been any other kind lately? — more than 40 members of the Brown Deer Park Men’s Golf Club packed Fore! to play golf on four state-of-the-art Full Swing simulators, cheer each other’s good shots and patronize the bar.

The vibe was laid-back and the golfers clearly were having a good time. Rock music played in the background and big-screen TVs were tuned to the Marquette-Villanova basketball game and the AT&T Pebble Beach National Pro-Am. A ping pong table just inside the entrance was getting a workout, too.

This is a typical Saturday. On weekends, reservations are recommended and the simulators often are booked all day, at $40 per hour.

Grogan opened Fore! six years ago in Milwaukee’s Third Ward and moved to the current location five years ago. His clientele includes everyone from businessmen who work downtown to millennials who live there to corporate outings and bachelor / birthday parties. There are also two leagues.

When it comes to indoor golf, Fore! Milwaukee isn’t the only game in town.

In Germantown, 24-year-old twin brothers Daniel and Ryan Hughes opened St1x Golf Bar in February 2018. The 1-year-old business has been so successful that the brothers are planning to add more Full Swing simulators to the three they already have.

“On our average weekend, we turn down 10 to 30 phone calls,” Ryan said. “We’re going to add two or three simulators this summer and scout out a second location. Our goal is to franchise it. I want 10 locations by the time I’m 30.”

The Hughes brothers led Cedarburg High School to a WIAA Division 1 state championship in 2013 and played college golf at Eastern Illinois. Ryan originally laid out the concept for St1x in an entrepreneurship class.

“We had to pitch it to the class and there was a $500 prize if you won the competition,” Ryan said. “I didn’t win. I got a ‘B’ on the project. Non-golfers didn’t know about sims, but golfers know what it’s about.”

The simulators at St1x feature more than 80 golf courses and the price to rent is $35 per hour.

Owner Chris Verhoff said Wisconsin Indoor Golf Center, which opened in Oconomowoc in 2012 and has been at its current location since 2015, is a seasonal business and typically closes in April. During the winter months, however, business is brisk.

“Weekends book up pretty good,” he said. “Evenings are pretty booked with leagues. We have two morning leagues and five evening leagues. Golfers love it. Most people aren’t going to get a chance to play courses like this for real, especially for under $500.”

The cost to rent the simulators at WIDC is $32 per hour weekdays and $37 weekends.

Several private clubs in Wisconsin have added simulators, so members can keep their games sharp in the winter. And the technology gets better every year.

“I fear golf simulators are going to become much more advanced,” course designer Gil Hanse said in the October 2018 issue of Golf Digest. “Technology 30 years from now will provide golf experiences more lifelike than we can imagine. Sights, sounds and climate will be duplicated, rain and temperature included. … Smells, conversation, bad bounces, they’ll have it all.”

But what if you want to hit golf balls outside? After all, there is something to be said for being able to watch your ball in flight.

Options abound. Several ranges throughout the state have heated bays.

At Vitense Golfland in Madison, which dates to 1955 and has been named a Top 50 Range in America by the Golf Range Association of America, 36 of the 80 tees are covered and heated.

Half the heated bays are equipped with Toptracer shot-tracking simulators, the same technology used at the popular Topgolf mega-ranges.

“The technology is out there, so why not leverage the opportunity?” said Joel Weitz, the owner and president of Vitense. “You can experience Pebble Beach right here on the golf range.”

Vitense has been open year-round since adding the heated bays in 2006 and because the range faces south, golfers aren’t exposed to cold north winds. Even with temperatures in the mid-20s, they can hit balls comfortably in a sweater or a lightweight wind shirt.

“This expands the market,” Weitz said. “I would say it’s doubled the potential market for golf.”

Among other ranges in the Milwaukee area that have heated bays are Gastrau’s Golf Center in Oak Creek, Missing Links Golf Course & Driving Range in Mequon and the Moorland Road Golf Center in New Berlin.

Missing Links also has an indoor simulator, as does Mr. Golf in De Pere. In fact, the list of facilities with simulators seems to grow everyday and includes popular gathering places in such areas as Beloit (Ironworks Golf Lab) and Fond du Lac (Donny Du's).

You may not be able to play real golf in Wisconsin in February, but where there’s a will, there’s a way.