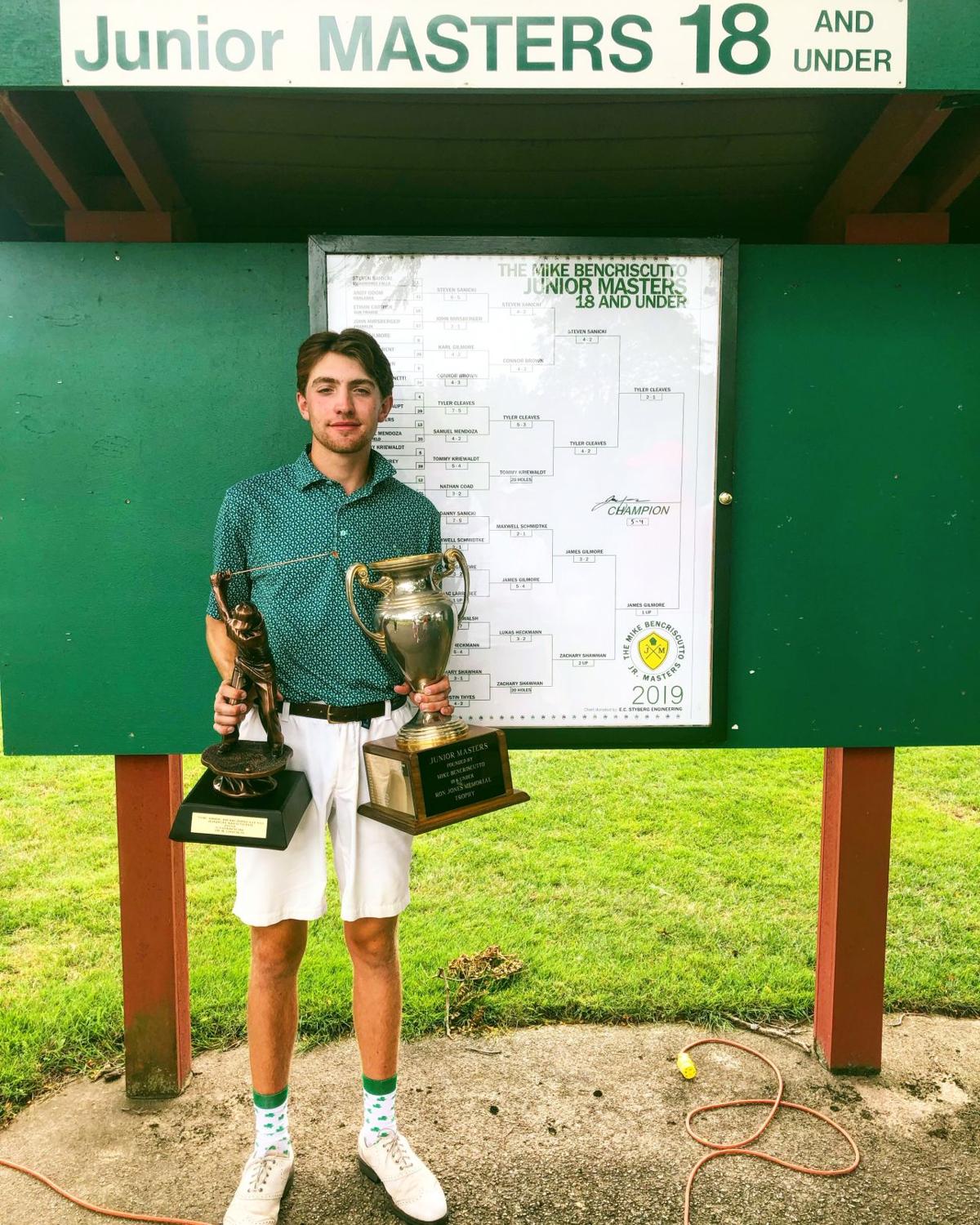 He had made five previous appearances in the Wisconsin Junior Masters with two holes-in-one, one trip to the semifinals and a lot of great memories.

James Gilmore's history at the 46th annual match-play event made what he did Friday at Johnson Park Golf Course in Racine feel that much sweeter.

The Madison golfer dispatched Tyler Cleaves of Kaukauna 5-and-4 in 36-hole final to win the 17-18 age division. William Hemauer of Wauwatosa knocked off Ty Mueller of Mequon 3-and-2 to win the 16-and-under age group in the event, which began Monday with the first of two rounds of stroke-play qualifying before the five rounds in the match-play format for the finalists.

"My putter this week was absolutely insane," Gilmore, the No. 7 seed who will attempt to walk on this fall at Miami (Ohio) University, wrote via text message to Wisconsin.golf. "I had under 25 putts in multiple rounds. Being familiar with the course was so helpful against Tyler (on Friday). This was his first time in this tournament and he played very solid the whole week."

Gilmore credits his 1-up win over Carthage College golfer Zachary Shawhan in the semifinals for boosting his confidence on the greens to another level. It took a 25-foot birdie putt on the last hole for Gilmore, who shot 69, to beat Shawhan, who had made six birdies in his first 12 holes, and advance.

"That really gave me a lot of momentum going into (Friday's) round," he said.

And that is where Cleaves felt the wrath of that hot putter. He pointed to the 50-footer Gilmore made for birdie on the 17th hole of their morning round as a turning points in the marathon final day from which he never recovered.

"The match was a battle," Cleaves, a Willmington (N.C.) University recruit, wrote in a text to Wisconsin.golf. "After a long week of golf, pars were winning holes. The match was very close until the 17th hole where James holed (the) 50-footer. ... In the next 15 holes, I couldn't gain any ground."

Gilmore wrote he felt the tide start to shift already on the 12th hole of the early round. He struggled to make par; Cleaves missed a short birdie putt.

His putter helped him do just that.

On the 29th hole, Cleaves hit his tee shot on the par-3 within two feet. Gilmore hit his to 15 feet and made the birdie putt to halve the hole.

"He was playing well, but I was just staying confident and making sure I didn't give him an opportunity to come back because I knew he could come back at any moment," wrote Gilmore, who closed out the match with a par on the 14th hole of the final round after Cleaves charged a birdie putt and missed the come-backer. "It was amazing to win this because my good friends Sean Murphy, Tyler Leach and Grant Germano won the last three years."

His name goes on a list of past champions that includes current PGA Tour stars Steve Stricker and Mark Wilson in a tournament that has drawn the likes of other Wisconsin  greats including Jerry Kelly, Skip Kendall and J.P. Hayes. But, for Gilmore, this one was special because it came in a finale against a golfer he's been battling forever with younger brother Karl as his caddie.

"Me and Tyler have been playing in summer tournaments together for about six years so we are pretty good buddies," Gilmore wrote. "I wouldn't have wanted to play the final against anyone else. He is a great competitor.

"Having Karl on the bag was amazing. He knows my game better than anyone and his advice on the greens led to some huge putts that may not have gone in if I was alone. He helped me stay loose throughout the round and it definitely helped me stay composed."

In the 16-and-under division, Hemauer took control of a tight match on the 12th hole of the second round. After hitting his tee shot was right on the short, par-5, he hit a 4-iron over the trees and onto the green en route to a birdie that helped him take a 1-up advantage in the match.

"I felt that really helped my confidence and changed the momentum after my bad drive," Hemauer wrote in a text to Wisconsin.golf. "To win the Junior Masters feels amazing. The whole tournament was a grind, especially the final (match) and I just feel relieved to come out on top."

Indeed, it was a significant victory for Hemauer over a golfer who has enjoyed a breakout summer himself.

Prior to reaching the Junior Masters final, Mueller had qualified for the Wisconsin State Open by shooting a 74 at Ozaukee Country Club in Mequon and won a one-day Wisconsin PGA Junior Tour event on the Irish Course at Whistling Straits with a 73, qualifying him for the upcoming WPGA Junior Tour Championship at Washington County GC in Hartford. He felt the five days at Johnson Park were some of the most valuable of his summer.

"Overall, my assessment of the week was how great of a tournament they are able to put on at Johnson Park," Mueller wrote in a text to Wisconsin.golf. "After the first two qualifying days, all players really had to grind out their matches in order to make it to the championship. It was a lot of golf ,which made it more of a challenge for us. At the end pars were winning many holes.

"You had to play the course very conservative and wait for your opponent to make mistakes."

"William was finding fairways and his irons were dialed," wrote Mueller, whose confidence with the driver waned in the final after having been "extremely confident" off the tee most of the week and felt the turning point in the match came on No. 14 of the afternoon session where he three-putted for bogey and Hemauer made a solid par. "Prior to that, I had only been 1-down and this made the momentum shift. He then made a great putt on the next hole for birdie, which put him 3-up with three (holes) to play."