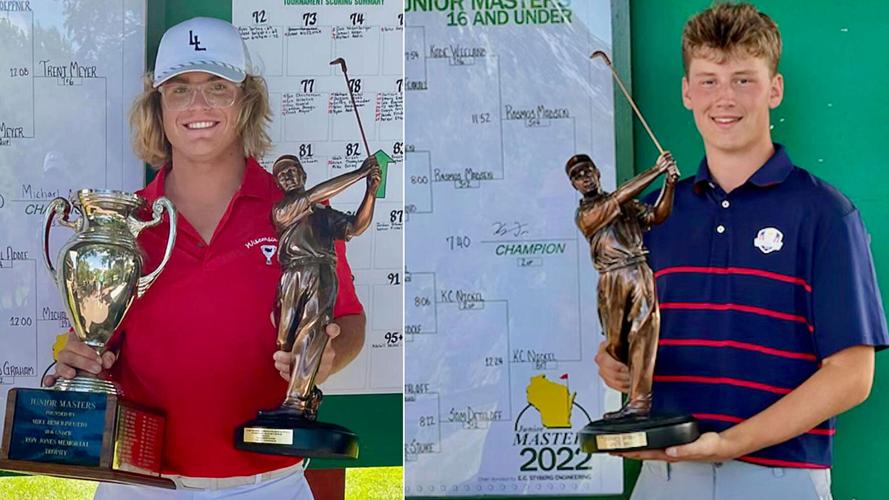 Michael Addie of Sussex (left) and K.C. Nickel of Waunakee pose with their trophies after winning the 2022 Wisconsin Junior Masters at Johnson Park GC in Racine. 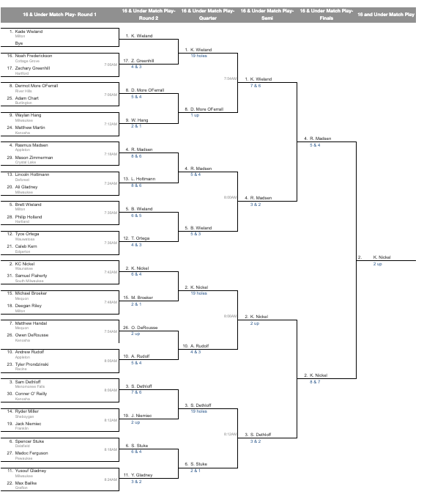 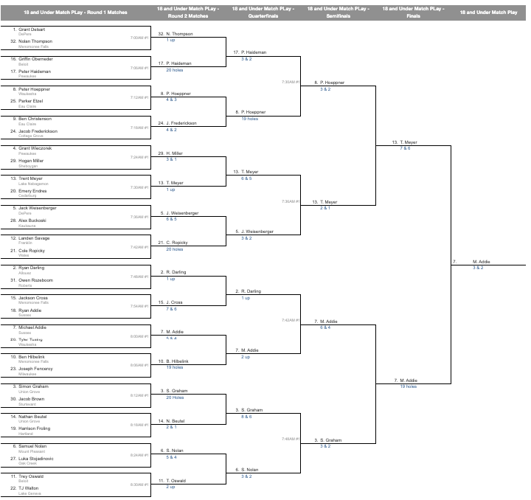 Michael Addie, who knows a thing or two about winning the Wisconsin Junior Masters, gave himself six holes Thursday to gain a lead on Trent Meyer in the championship match of the 17-18 age division at Johnson Park Golf Course in Racine.

Once that box was checked, it only took the Sussex golfer 10 more holes to close out the match and become the first repeat winner since 1990 of the state's lone boys match-play championship. Addie watched Meyer, a UW-Green Bay recruit from Lake Nebagamon, draw within 1 down after the 13th hole before winning No. 14, halving No. 15 and making a 10-foot birdie putt at the par-5 16th hole to close out the 3 and 2 victory and a repeat championship.

"(Thursday) my goal was to come in and have a lead after six holes; I felt if I could hold a lead after that, I should be fine," Addie wrote in a text message to Wisconsin.Golf, remembering how he won two of his first four holes from Elm Grove's Sebastian Kasun in the finals of the 2021 Junior Masters, built a 4-up lead by the turn and held on for the 2-and-1 victory. "This year, I felt was a little tougher because I feel like I had a little pressure on me coming back and had a target on my back coming into the week, which is what I like.

"But it feels amazing coming out of here with another win in my second and final appearance at the Junior Masters!"

Indeed, while Addie — the first repeat champion since former University of Wisconsin golfer Jason Fitchett of Green Bay in 1990 — celebrated a 10-0 career record in his two starts in this event, KC Nickel went 5-0 in his Junior Masters debut to win the 16-and-under title. After the Waunakee golfer won three holes in a row and took his first lead at No. 9, Appleton's Rasmus Madsen cut a three-hole deficit to one with birdies at Nos. 14 and 17 before Nickel took No. 18 to close out the 2-up win.

"I played well each day so my scores were probably very similar," Nickel wrote in a text to Wisconsin.Golf after three of his last four matches reached the final green around an 8 and 7 rout of Menomonee Falls' Sam Detloff. "It was nice to have my cousin on the bag this week. Having someone who you can joke around with helps a lot with my mental game."

Madsen, who was 2 up through five holes, felt his round "started going downhill after that" and lamented his inability to make a putt outside of 3 feet the entire round. Still, since his third-place finish at the WIAA Division 1 state tournament in early June, the rising senior at Appleton North has enjoyed a steady diet of top-10 finishes in summer majors, highlighted by a win at a WPGA Players Tour event at two other courses in the Racine area a month ago.

"I've had a great summer," Madsen wrote in a text to Wisconsin.Golf. "Overall, I'm pretty happy with this week's results, but disappointed I wasn't able to close it out."

Meyer knows the feeling, winning two of his four matches on the way to the final before reaching the 14th tee and winning the other two on No. 18.

Then again, this was only the second in-state junior event of the year for Meyer, who finished T-4 for Northwestern (Maple) at the WIAA Division 2 state tournament at Blackwolf Run in Kohler. He missed qualifying for the Wisconsin State Amateur by one stroke despite a 73 at Turtleback GC in Rice Lake and then missed qualifying for the Wisconsin State Open by two strokes with a 77 at Stevens Point CC.

"So far, I haven't had a ton of success this summer, but I haven't played in many junior tournaments, either," Meyer wrote in a text to Wisconsin.Golf, adding that he also finished T-48 at the High School Golf National Invitational on Nos. 5, 6 and 7 at Pinehurst (N.C.) Resort. "I also played decent in June at the Ray Fischer (State Amateur at Janesville Riverside, where he finished T-34 out of 198 golfers), where I was able to be paired up with (three-time Wisconsin State Player of the Year) Jack Schultz on the final day. I think being able to play with someone as experienced and high-caliber of a player as him helped me see the next level of golf that I want to get to."

Addie has high hopes of playing NCAA Division I golf, too. That is why the former Hamilton (Sussex) standout will start that journey this fall at Parkland College in Champaign, Ill., playing for the No. 5-ranked NJCAA Division II program in the nation, according to the 2021-22 season-ending GolfStat.com poll.

"Playing at Parkland is going to be really great for me, getting a year or two under my belt to develop a little more!" Addie wrote. "Playing at a top level junior college is going to be great because they have connections with bigger schools and I know my coach is going to help me with wherever I end up!"

"I feel like my summer has been up and down, qualifying for all of the events I had on my bucket list," Addie wrote.  "My qualifier for the Am was the best round of the summer with a 66. (I) hit the ball amazing for that month and a half stretch.

"(I) battled hard at the Am, came up short of the cut, but nonetheless was a learning experience! This win gives me a lot of confidence going into the (Wisconsin) Junior Boys next week. ... (I'm) really looking forward to The Oaks!"

'To me, he was just Herb, a friend of the game': Herbert V. Kohler Jr., whose empire transformed golf in Wisconsin, dies at age 83

'To me, he was just Herb, a friend of the game': Herbert V. Kohler Jr., whose empire transformed golf in Wisconsin, dies at age 83