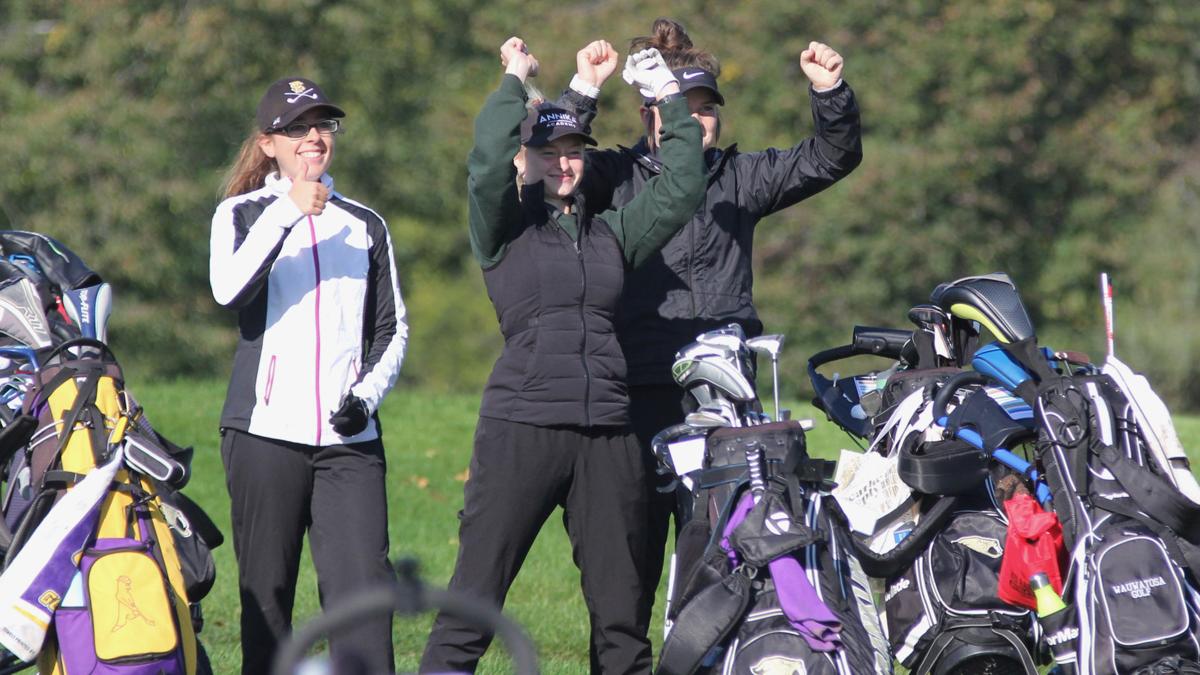 From a clinical perspective, it might be difficult to measure the emotional impact that could result if the WIAA is forced to modify or cancel the girls golf season this fall due to the ongoing COVID-19 pandemic as it did this past spring in canceling the boys season in its entirety for the first time.

However, WIAA executive director Dave Anderson said last week he hopes the state's governing body for high school sports won't have to resort to doing so again next month when the 2020 girls golf season is set to get underway.

In a video conference Tuesday to update school administrators and members of the media on findings of a study that analyzed the impact of the spring shutdown on student-athletes, Anderson said the WIAA is moving forward with the expectation that there will be high school sports this fall. He said those decisions will be made at the district and conference levels, but if enough schools choose to support competition in fall sports, including girls golf, the WIAA will be poised to offer a tournament option for those schools.

"If we have members who are open and want to have a regular season, we will do all within our ability to help those opportunities go forward," Anderson said on the call. "If our members are open and desire to have a tournament opportunity, until such a time that our Board of Control would point us in a different direction or give us different marching orders, we will do all that we can to provide a tournament opportunity for those members who are open and would desire one. That being said, there will most likely ... need to be adjustments to tournament procedures and those sorts of things."

Anderson's response no doubt provided measured optimism for many of Wisconsin's 178,000-plus participants in WIAA-sanctioned sports.

According to Dr. Tim McGuine, who led a team of doctors at the University of Wisconsin School of Medicine and Public Health in studying the impact of the school closures and sports cancellations on high school-age athletes, nearly two-thirds of the 3,243 participants reported symptoms of anxiety, with 25 percent of those being categorized as moderate or severe. In addition, nearly 70 percent of respondents reported mild to severe symptoms of depression and the study showed a nearly 50 percent decrease in physical activity.

Student-athletes in 71 of Wisconsin's 72 counties took the short online survey during May, according to McGuine. They were recruited via social media as well as a mass email campaign. McGuine said the average age of participants was 16.2 and that 58 percent of those who responded were female.

"Right now, we're estimating — based on our calculations — that 66,000 or two-thirds of Wisconsin interscholastic athletes were at risk for depression," McGuine said. "Right off the bat, that's quite high. ... Moving forward, I think it's imperative that public health experts work with school administrators, school officials — coaches, teachers, whatever — and consider the benefits and risks of continuing the prolonged school closures."

In other words, McGuine was asked, at what point does the potential mental-health damage caused by those closures outweigh the potential dangers of practicing and competing in a COVID-19 environment with so many unknowns?

"That's the $10 million question," McGuine said, acknowledging the answer might vary by area. "It's not just about preventing an illness or injury. It's a trade in terms of what we're doing to stop the spread of this viral infection has other, unintended impacts. There is not a one-size-fits-all formula for all schools, all districts, all counties in the state of Wisconsin.

"But we need to be aware there are benefits and risks of continuing these (school) closures and (sports) cancellations into the next school year."

McGuine said his study was not able to isolate the impact of school closures and cancellation of the boys golf season on student-athletes specific to that sport. Therefore, he said, he could not determine if the opportunity to play golf with teammates outside of an interscholastic setting once courses in Wisconsin reopened in late March minimized among golfers the depression and anxiety findings that his study found among the participants overall.

"We're teasing out some of the sport(-by-sport) numbers as we speak, not just here but nationally, in looking at what was going on," McGuine said. "That's a great question because some of these individuals kept doing some things. Unfortunately, we don't have a large sample (of golfers). There were like 1,000 kids who did track who completed our survey but only 30 who did golf. We don't have a good sample to make strong recommendations.

"Looking at sports and other factors is something we have to look at." 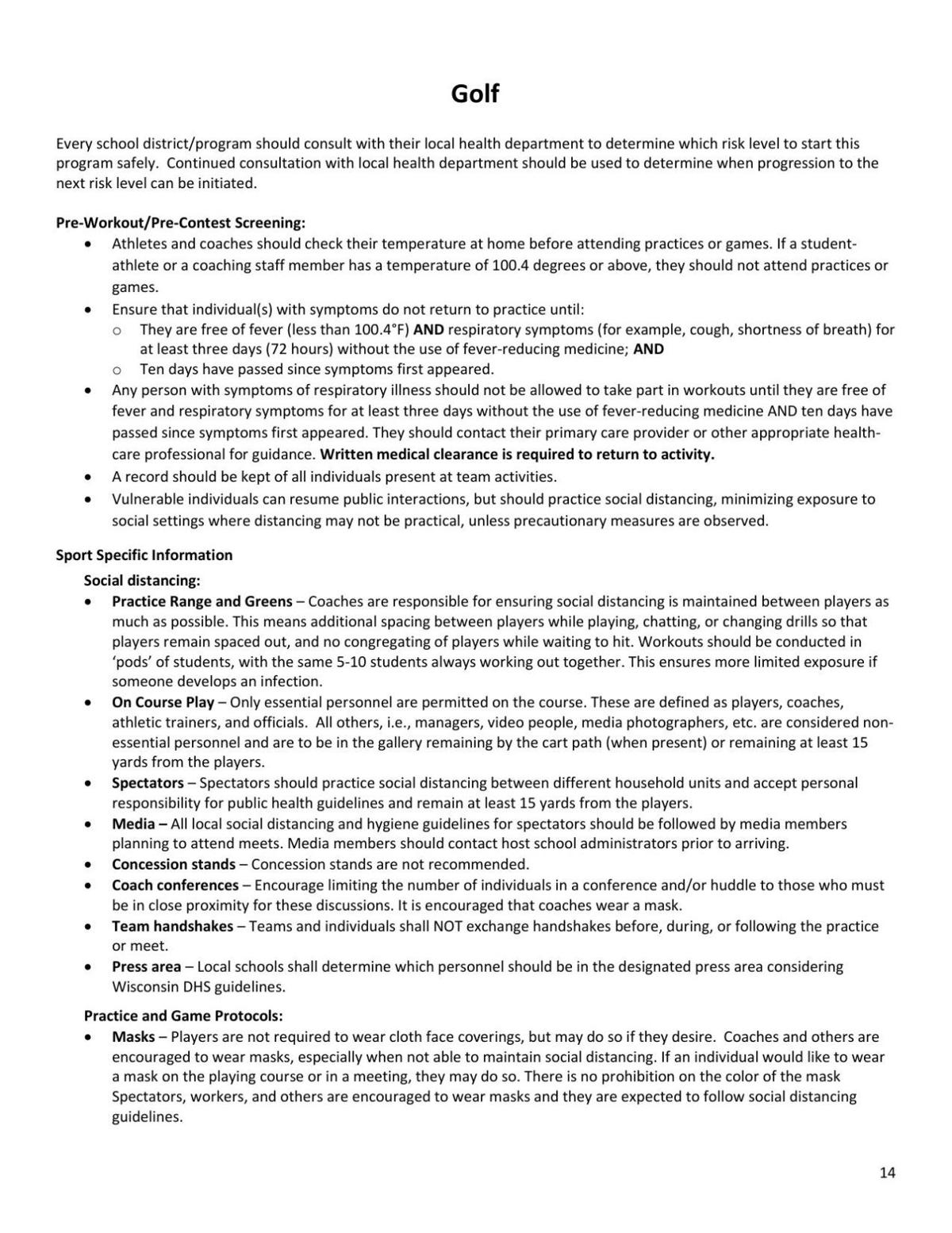 Meanwhile, in looking toward the fall, Anderson said the WIAA understands a school "has many responsibilities to a community" and that, ultimately, all parties share a common goal of acting in the best interest of children.

The WIAA has issued sport-specific guidelines outlining what precautions need to be taken for interscholastic sports to resume next month.

"I think back to having been a school athletics administrator and my job then, as I view our job now, was primarily, first and foremost, to take care of kids," Anderson said. "We recognize many and broad other responsibilities, but No. 1 we boil it down to what is it that we might do that is best for the kids that you, as a school, will serve and ... we as one of those support organizations what can we do to help provide our members with the best information and resources that we can. It is data and research like this that we have heard in the weeks and months since schools closed, since every state in the United States canceled the remainder of their winter sports programs and most of us their spring sports seasons as well.

"We did that, focused on the urgency at the time. As a country, as a state, we needed to afford our health care providers a few minutes to catch up to what was exploding and impacting on all of us. As we have progressed a little further along this ever-changing trail, we are hearing and recognizing this adverse impact on students. Right now, it is that negative impact on students that we see emerging in Dr. McGuine's research and I suspect other research that is forthcoming that is driving our primary focus and position right now.

"Admittedly, there are questions we are not able to answer in this minute. This is rapidly changing. As I shared with the State Assembly committee, if our member schools are open and choose to have a sports season and wish to have a tournament, the staff at the WIAA will be there to help support that."