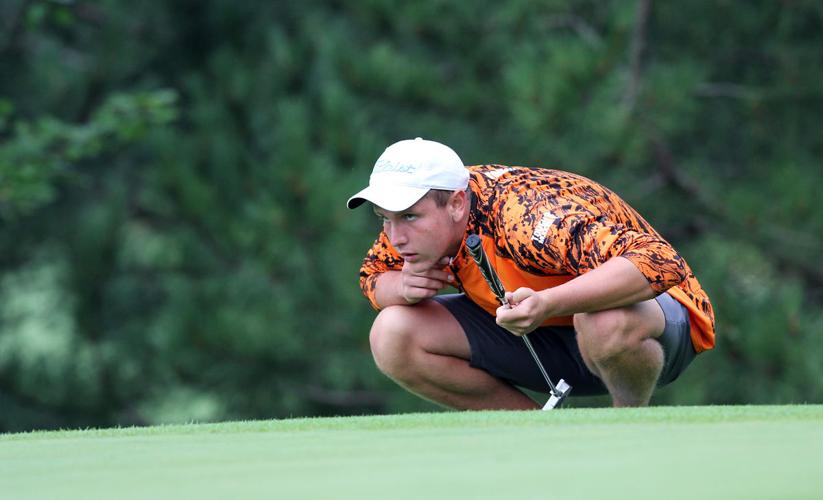 Kaukauna's Brock Hlinak gets a good look at this putt during final-round play Thursday at the Wisconsin State Am. Hlinak finished the championship in third place. 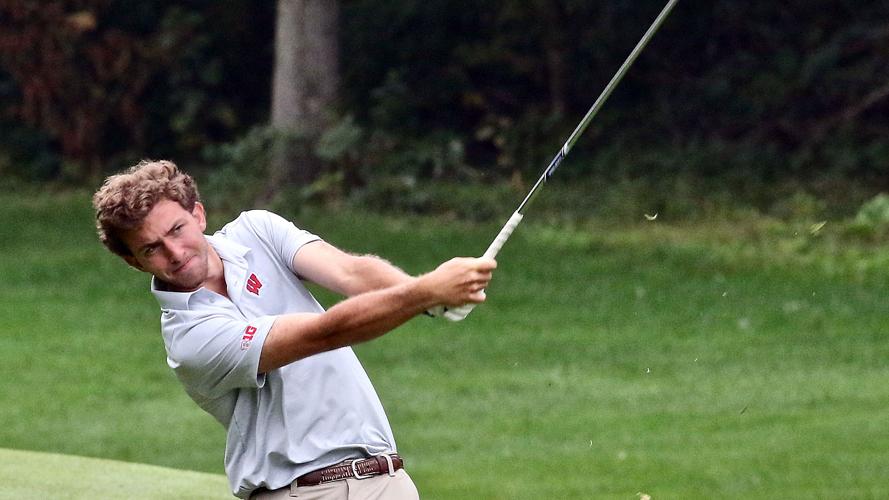 Wisconsin’s Jack Blair has a determined look as he hits from the fairway Monday at the Badger Invitational. 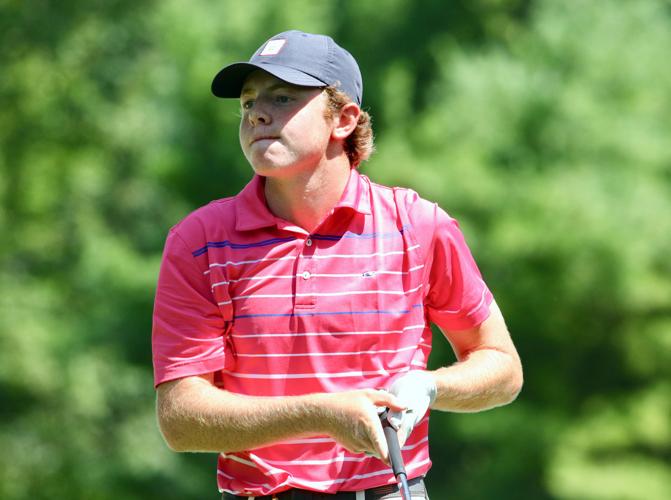 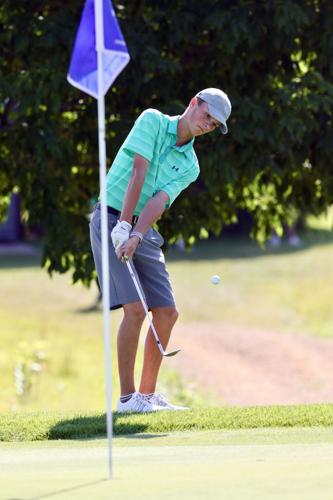 Zak Kulka watches this chip during Wednesday’s final round. Kulka, from Beaver Dam, finished the tournament tied for eighth. 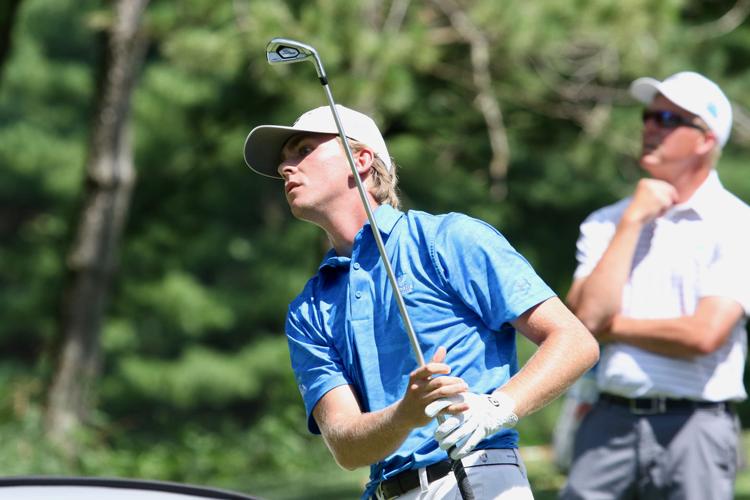 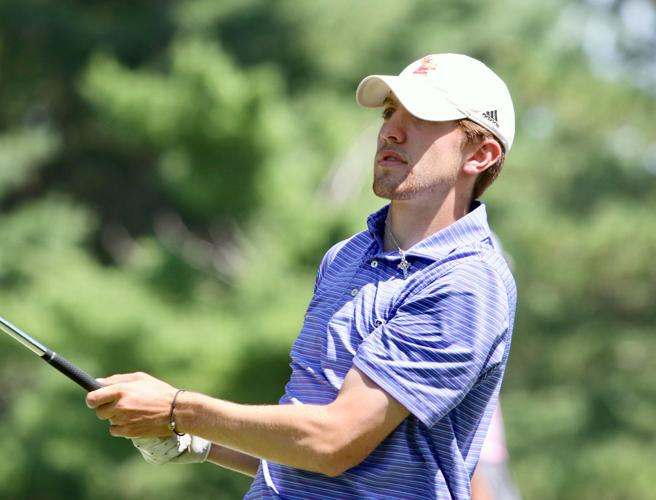 When it comes to boys golf in Wisconsin, the Class of 2019 will be remembered for many things, not the least of which was its mobility.

For four years, the names in the Wisconsin.golf annual rankings moved up, down and all around as their games matured, confidence grew and resumes developed. When they left this fall for college, the 50 golfers in our final installment of the Class of 2019 rankings became scattered over 11 states — from Pennsylvania to California and from Minnesota to Louisiana.

This final ranking, reflecting accomplishments not only from their final season of high school golf last spring but also the impact and performance through one semester as college freshmen, reflects that mobility. And, believe it or not, as I learned Wednesday evening, they are not done moving quite yet (more on that shortly).

Kaukauna's Brock Hlinak, the one constant in this class, completes a wire-to-wire reign as its No. 1 golfer. After a somewhat quiet summer (compared to his breakout summer of 2018), he went to Queens University of Charlotte (N.C.), played all four tournaments on the Royals' fall schedule and averaged 74.17 in 12 rounds for the nation's 30th-ranked NCAA Division II program.

Hlinak figures to be a key piece in the Queens puzzle next spring when it tries to defend its South Atlantic Conference Championship and make its second straight NCAA Division II regional appearance. He turned in a pair of top-25 performances and his score counted for the Royals in eight of his 12 rounds.

Wisconsin’s Jack Blair has a determined look as he hits from the fairway Monday at the Badger Invitational.

No. 2 Jack Blair of Milwaukee Marquette, who won his first AJGA title at the Wincraft/McArthur Towel & Sports Future Legends Tournament at the Legend at Merrill Hills in Waukesha and was the top finisher in his class at the WSGA Junior Boys Championship (third), got his first taste of NCAA Division I golf late in the fall schedule at the University of Wisconsin. After shooting 75-72 at Pleasant View Golf Course in Middleton in an individual collegiate event UW hosted that also served as the qualifying round for the No. 5 spot in the fall finale for the Badgers, Blair shot 74-76-75 the following week in his official UW debut at the Musketeer Classic in Cincinnati, as his score counted all three rounds in an event the Badgers won by four shots over Northern Illinois.

No. 3 Blake Wisdom of Lake Geneva Badger, like Hlinak, was another example of the great impact golfers in this class had during their first months of college competition. He played in all six events at Bucknell University in Lewisburg, Pa., twice breaking 70 and averaging 73.5 in 15 rounds (second among the Bison) for a team that finished fourth in the Patriot League last spring.

In all, 14 of the 20 golfers in our top 25 playing intercollegiate golf played in at least half of their team's events. Three more — Brookfield Central's Jack Anderson and Sheboygan North's Austin Thyes (UW) and Fond du Lac Springs' Doyle Kelly (Marquette) — enjoyed success playing club golf at their schools.

Zak Kulka watches this chip during Wednesday’s final round. Kulka, from Beaver Dam, finished the tournament tied for eighth.

No. 4 Zak Kulka of Beaver Dam cracked the lineup late in the fall at UW-Green Bay and averaged 75.67 in six rounds. That followed a summer in which he tied for eighth at the WSGA Junior Boys and 19th at the Wisconsin State Am.

No. 5 Matthew Raab of Hartland Arrowhead averaged 74.0 in eight rounds for NCAA Division III power St. Thomas (Minn.). He was not in the lineup for the Minnesota Intercollegiate Athletic Conference Championship, but did join the Tommies in Florida at the Golfweek DIII Fall Invite the following week as their No. 5 golfer, shot 75-72-71 and finished tied for 32nd in the 90-golfer field.

St. Thomas, which will lose one Wisconsin golfer this spring when Middleton's Emmet Herb graduates, is poised to gain two more from our Class of 2019 top 10 next semester.

No. 6 James Gilmore of Madison Edgewood, who spent first semester at Miami (Ohio) but did not play golf, and No. 10 Drew Sagrillo of Milwaukee Marquette, who averaged 78.78 in nine rounds at Dominican University of California, will transfer to St. Thomas, Gilmore's father told Wisconsin.golf via email. They could figure prominently in the program's future if the school, which will leave the MIAC under pressure after the 2020-21 school year, is successful in appealing to the NCAA to re-classify directly to Division I in 2021.

Gilmore enjoyed a banner final summer of junior golf after finishing tied for third at the WIAA state tournament for the Division 2 champion Crusaders. After tying for 10th at the WPGA Junior Championship and tying for third at a WPGA Players Tour event at Blackwolf Run in Kohler, Gilmore won the 17-18 age division at the Wisconsin Junior Masters in Racine and finished tied for 12th at the WSGA Junior Boys before leaving for college.

No. 7 Danny Sanicki of Menomonee Falls stepped in as the No. 1 golfer at Division II UW-Parkside, averaging 76.45 in 11 rounds this fall. No. 8 Lucas Heckman of Middleton by way of Lakeside Lutheran (76.6) and No. 9 Max Schmidtke of Sheboygan North (77.13) worked their way into the lineup at Division I New Orleans and Division II Illinois-Springfield, respectively.

The work of others led to Sagrillo slipping from No. 3 to No. 10 after a strong start to his summer with a third-place showing at the WIAA Division 1 state tournament for state champion Marquette and a runner-up finish to Class of 2020 No. 1 Piercen Hunt of Hartland at the Lake Arrowhead Invitational. However, Sagrillo established himself as the No. 3 golfer at Dominican with a 78.77 average and gained valuable experience ahead of his planned transfer from the 137th-ranked team in Division II to the No. 6 team in Division III.

As deep and impactful as this class was in high school, with a handful of junior college and club golfers in our top 50 who haven't reached their final destination, their best moves might be yet to come.