KOHLER — On his way to a place that he had been before, Reece Breitenbach made a stop Tuesday to a patch of the Meadow Valleys Course at Blackwolf Run that the Kohler junior — and, quite frankly, just about anyone who has teed it up there — never knew existed.

It was, to say the least, a patch of bother.

Trying to put the finishing touches on what had become a successful defense of his team's WIAA Division 3 state championship, Breitenbach's approach shot to the 18th green sailed over the Sheboygan River, kept flying past the putting surface, chipped a tree behind the green and came to rest near the top of a hill beneath the distinguished clubhouse patio.

"I must have had a flier lie from (where I was) in the rough and I just pounded it into the trees, up by the patio," Breitenbach said. "I've never been up there before. A new first."

The scrambling double-bogey 6 that came from the eventful detour ultimately kept the Blue Bombers' No. 1 golfer from forcing a playoff for medalist honors, but it didn't keep Kohler from becoming only the third Division 3 school to successfully repeat as state champion since the division was added in 1989. Osseo-Fairchild has done it three times, including its run of three consecutive championships starting in 1994, and St. Mary's Springs (Fond du Lac) was the other, winning a division-record four in a row from 2015 through 2018. 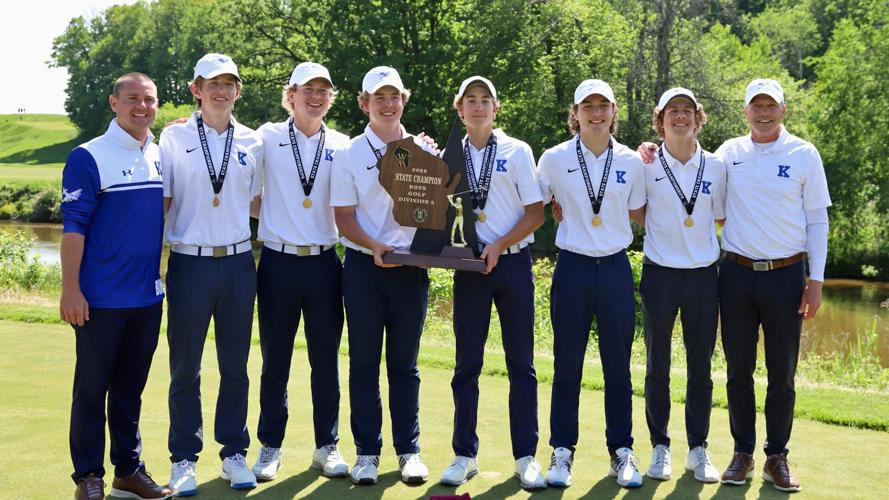 The 2022 WIAA state champions Kohler poses with the first-place trophy. 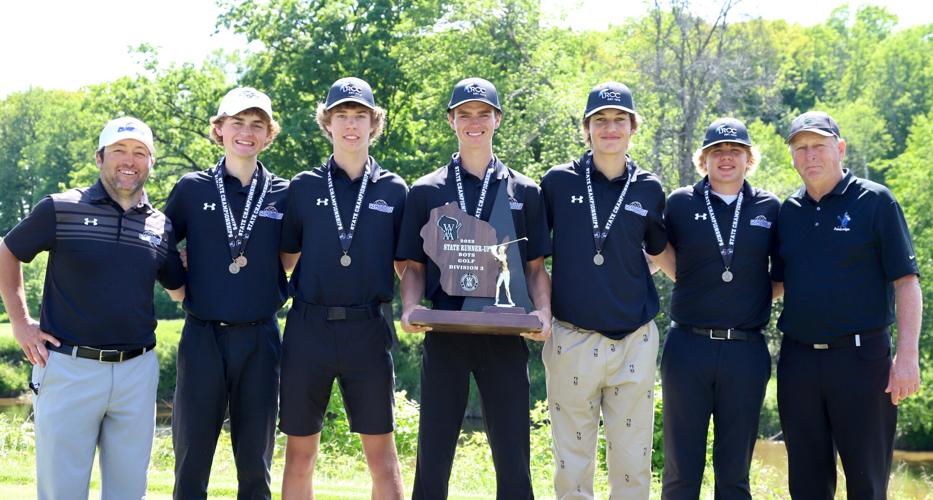 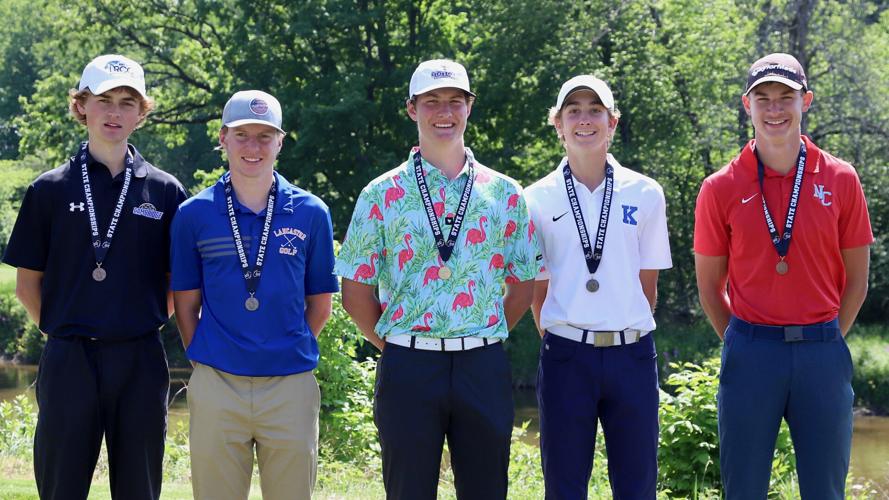 The 2022 WIAA state champions Kohler poses with the first-place trophy.

As they have most of the season, Breitenbach (76) and No. 2 golfer Everett Schroeder (75) led the way for the Blue Bombers, who also counted an 83 from No. 3 golfer Lucas Albrecht and an 88 from No. 5 golfer Cohen Otte, who bounced back from a 49 playing the back nine on his outward nine with a 39 on the front to end the season. With a 322, Kohler finished with a 36-hole total of 643, five strokes better than first-round leader Cambridge (331).

"I don't know if that's what won it for us or not," Kohler coach David Albrecht said, when asked if his team's experience with the course and the pressure of closing out a victory on Day 2 of a state championship proved to be the difference. "Those boys from Cambridge are great sports and very talented. I think us knowing the course certainly didn't hurt us, for sure, because we knew we were going to make mistakes. Everyone who plays the Meadow Valleys knows you're going to make mistakes.

"It's the attitude that we had — and not that they didn't — that when we made those mistakes, how are they going to persevere?"

The Blue Bombers didn't waste any time seizing control of the proceedings.

Four strokes behind to start the day, they played the tight 330-yard, par-4 10th hole in 1-under and picked up seven strokes on Cambridge by the time the No. 1 golfers reached the 11th tee. The Blue Jays eventually settled down and played solid golf the rest of the way, but that slow start proved fatal to their title chances in the end.

"They were in it last year and we haven't been here before," said Cambridge coach Travis Galston, whose school was making its first appearance as a team since 2009. "We felt things on the first tee that we've never felt before. ... We're not very good long-iron players off the tee. Our advantage is when we can take a driver out because we have three guys that can hit it over 300 (yards). This year, whenever we had to hit an iron off a tee to start a match, we always struggled. That's what we had to start with off 10 and that's how it goes."

Consistency proved to be the key in deciding Division 3 medalist honors.

Parkview (Orfordville) senior Trey Oswald shot his second consecutive 75 and, at 6-over-par 150, held off Breitenbach (76-76) and defending champion Noah Kirsch (80-72), who said he drove the ball beautifully but struggled to convert an abundance of birdie opportunities he had over two days. Oswald, dressed in a colorful flamingo-themed Bad Birdie polo that matched with assistant coach Jeff Vine, made seven straight pars between an opening double-bogey on No. 10 and a par on No. 18 and made birdies on Nos. 3 and 7 in between bogeys at Nos. 2 and 9.

"We just wanted to play aggressive, play like we were two shots behind on every hole," said Oswald, who held the first-round lead with a 74 a year ago at Trappers Turn GC in Wisconsin Dells only to close with an 80 and finish T-2 behind Kirsch. "Last year, we didn't do that. We did it this year. Getting off the tee was really good. I was always playing from the fairway so that helps. And then my wedges were really good."