Kohler and Cambridge survived the Abundant Life (Madison) sectional and the adventure of getting to the WIAA state tournament, where they finished 1-2, respectively, at Blackwolf Run in Kohler. But the state champion Blue Bombers came this close to not getting there at all, outlasting Roncalli (Manitowoc) 11-14 in a one-hole playoff on the par-3 10th hole at The Oaks Golf Course in Cottage Grove featuring all 10 golfers from the two teams in a play-five, count-four sudden-death format for the last of two state berths behind Cambridge.

The only way those three schools will see one another in the WIAA postseason this spring is if they qualify for the Division 3 state tournament.

In an apparent effort to better balance the stronger programs across multiple sectionals, the WIAA has moved Roncalli to what this year will be the Crivitz sectional where Marathon (fourth place) and Wabeno/Laona (seventh) earned state tournament berths in 2022. It left Kohler and Cambridge in the St. Mary's Springs (Fond du Lac) sectional, but moved the Abundant Life co-op, which finished fourth in the sectional last year, to the Mineral Point sectional where the Pointers (third) and Lancaster (fifth) qualified for the state tournament last year.

That's not to say that Kohler, which returns its top three golfers, and Cambridge, which brings back four of its top five, will have a clear path back to Blackwolf Run. St. Mary's Springs, which was ranked eighth in the final 2022 Division 3 state poll, returns four of its five starters while No. 10 Sheboygan Lutheran and No. 11 Elkhart Lake-Glenbeulah each bring back three and all three schools remain in the sectional, which St. Mary's Springs will host at South Hills G&CC in Fond du Lac.

However, the WIAA did send a message with its 2023 tournament assignments that — while sticking to its charged task of administering a tournament series built on geographical representation — it can do so while addressing past criticism that it didn't do enough to balance the assignment of top teams or perennial powers.

To wit? After assigning three of the top five teams from the 2021 WIAA Division 1 state tournament — Kettle Moraine (first), Mequon Homestead (second) and Hartland Arrowhead (fifth) — to the same sectional in 2022, the WIAA has assigned each to its own sectional for the 2023 tournament series.

Kettle Moraine, which finished second to Eau Claire Memorial at the 2022 Division 1 state tournament, will go south to what last year was the Brookfield Central sectional where Union Grove (13th) and Brookfield East (15th) earned berths in the 16-team state tournament field. Homestead, which finished T-7 at Blackwolf Run last season, will go north to the Plymouth sectional where Sheboygan North (T-4) and Fond du Lac (14th) earned state berths. Arrowhead will anchor a sectional that has yet to be assigned a host school but has a pair of returning state qualifiers in Brookfield East (15th) and Wauwatosa East/West (12th).

A fourth Division 1 sectional will be hosted by Marquette (Milwaukee), which has qualified for the state tournament 11 of the last 12 years (there was no tournament series in 2020 due to COVID-19). The Hilltoppers finished third behind Eau Claire Memorial and Kettle Moraine in 2022.

Where the WIAA wasn't able to separate 2022 powers, in at least one case, it assigned the sectional to the school that has been on the outside of the state tournament looking in each of the last two years.

That was the case with what is traditionally the tougher of the two Madison-area sectionals. Waunakee, ranked 10th in the final 2022 Division 1 coaches poll after being ranked among the top two most of the regular season, will play host to the sectional at The Meadows of Six Mile Creek this year after finishing a disappointing fifth at the Onalaska sectional last year and coming up one shot shy of a state berth at the Madison Memorial sectional in 2021.

Meanwhile, defending Division 1 state champion Eau Claire Memorial and Lakeland (Minocqua), which finished T-4 in its Division 1 state tournament debut after years as a Division 2 power, headline a Marshfield sectional that has the same 16 teams as a year ago. It is one of two sectionals identical to 2022 in Division 1, which adds two schools from Division 2 a year ago (New London and Monroe) and features the first year of two high schools in Sun Prairie.

In Division 2, New Berlin Eisenhower, New Berlin West and Golda Meir (Milwaukee) drop down from Division 1 while Colby and Cumberland move up from Division 3 to account for the departures of Monroe and New London to Division 1 and Valders and Winnebago Lutheran (Fond du Lac) to Division 3. Edgewood (Madison) will make its quest for its sixth consecutive Division 2 state title with stops at the New Glarus regional and Prairie du Chien sectional. 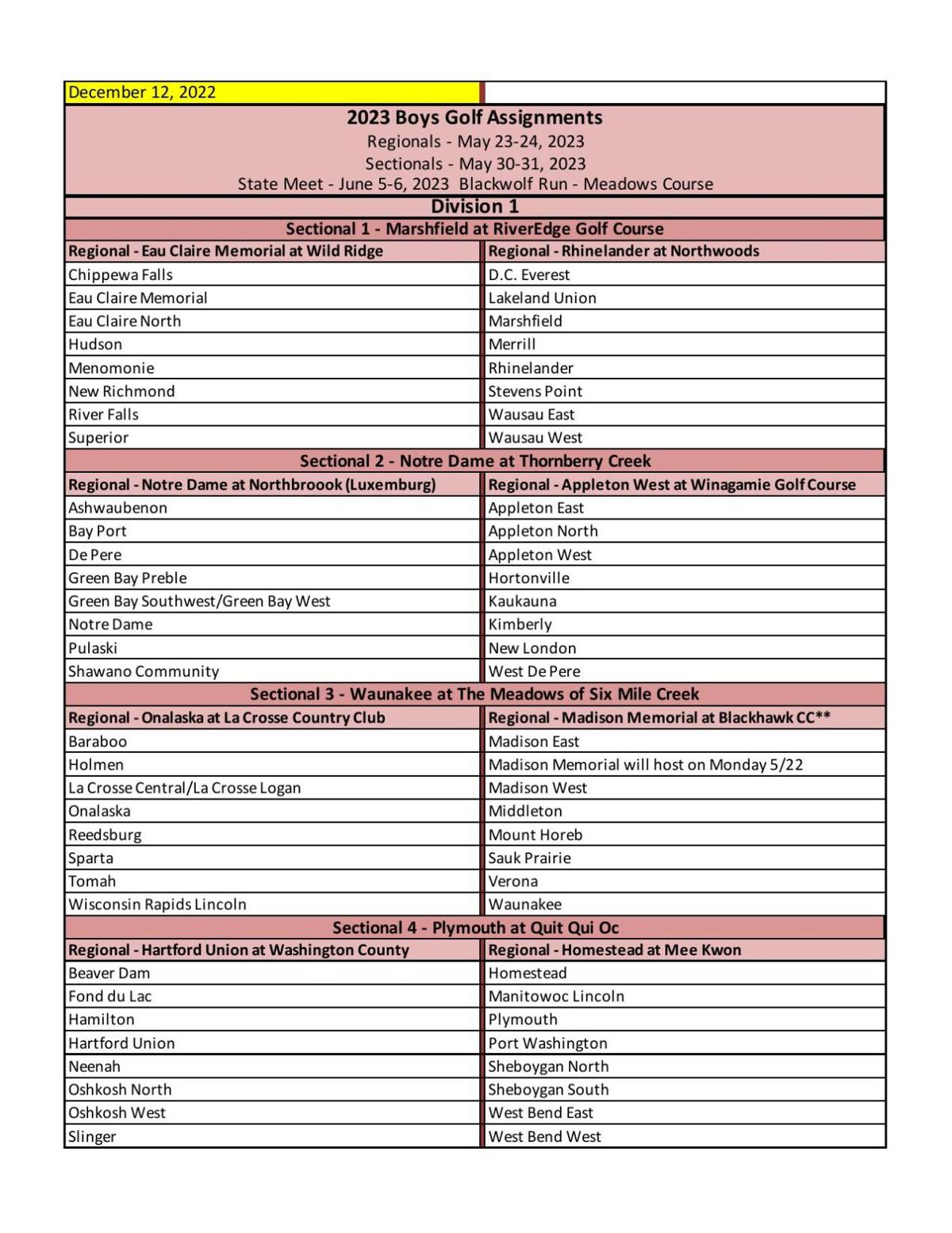 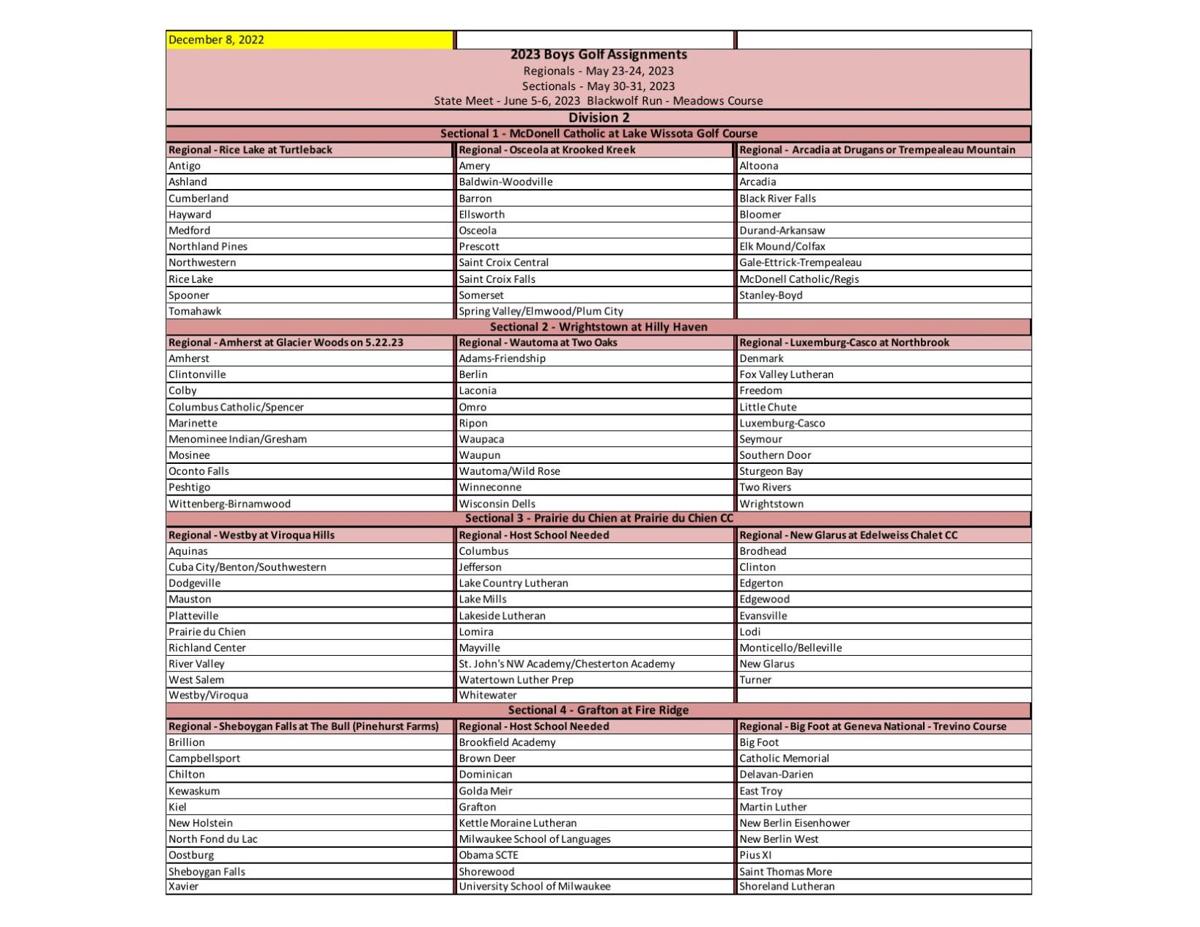 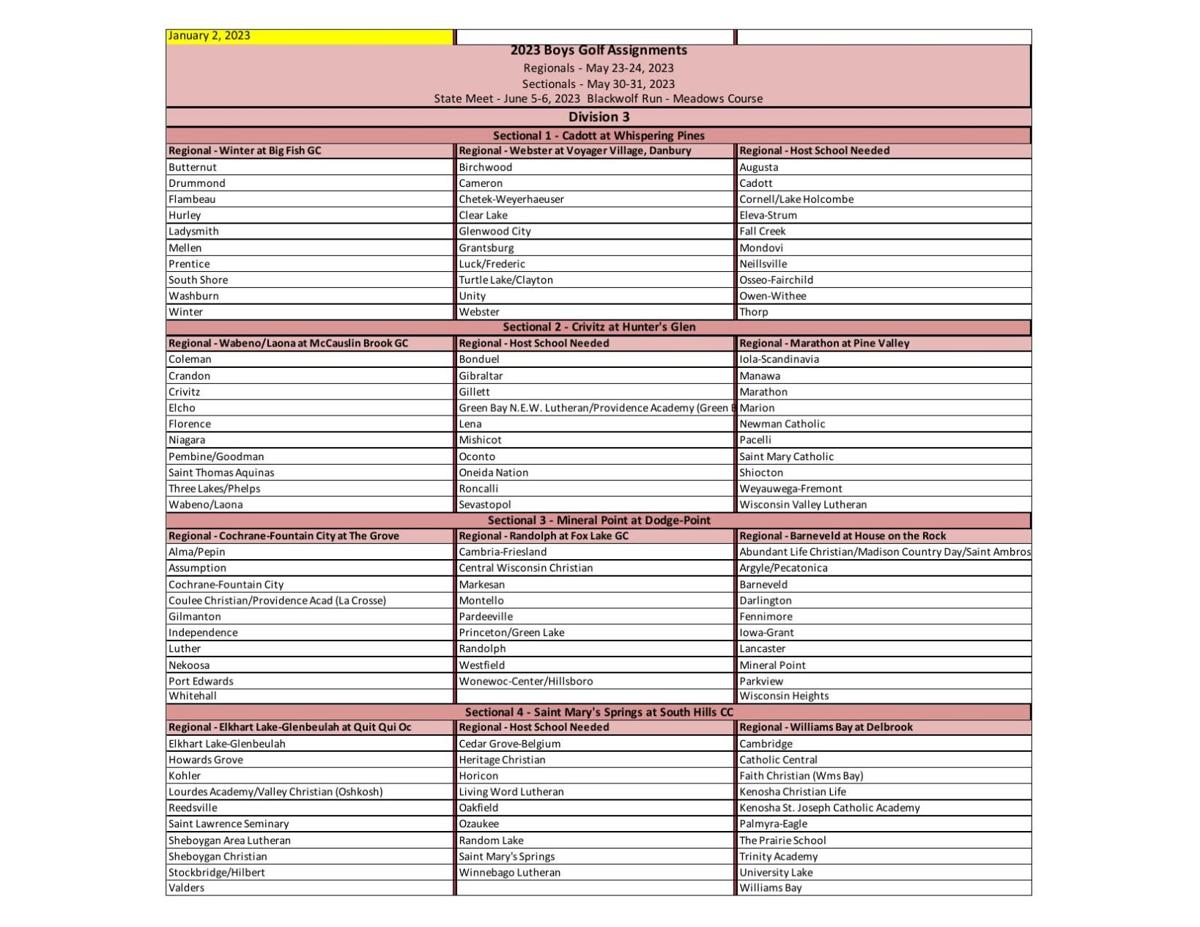