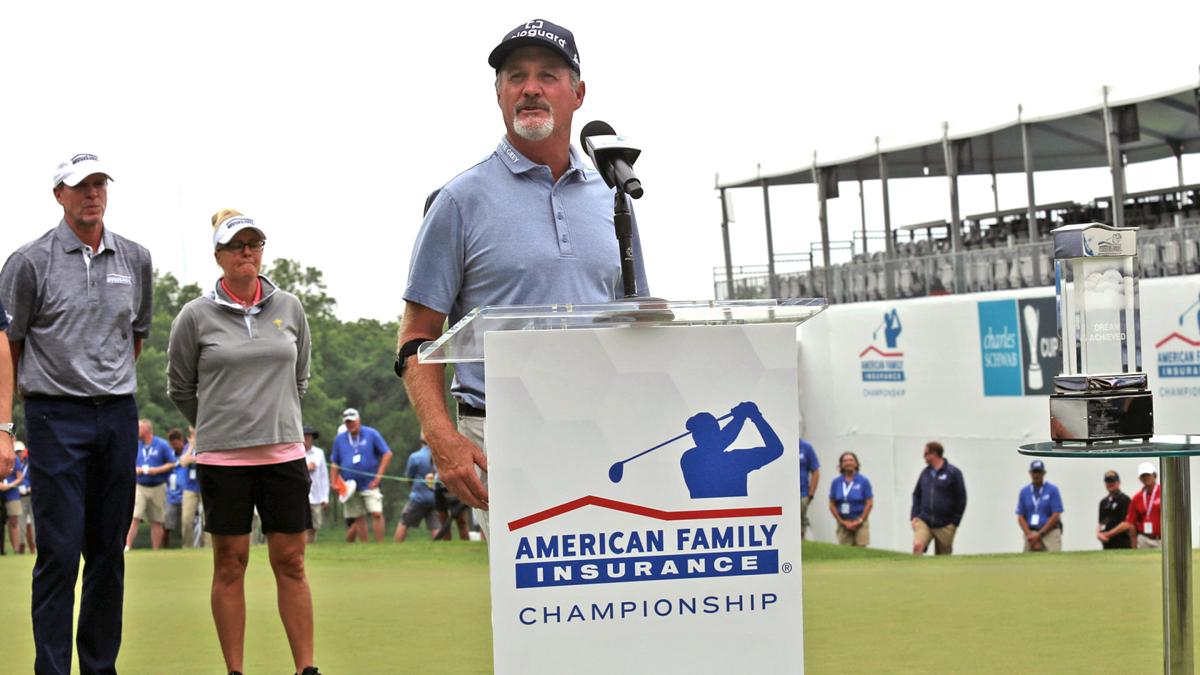 Jerry Kelly addresses the gallery after winning the 2019 American Family Insurance Championship. Steve and Nicki Stricker stand in the background. 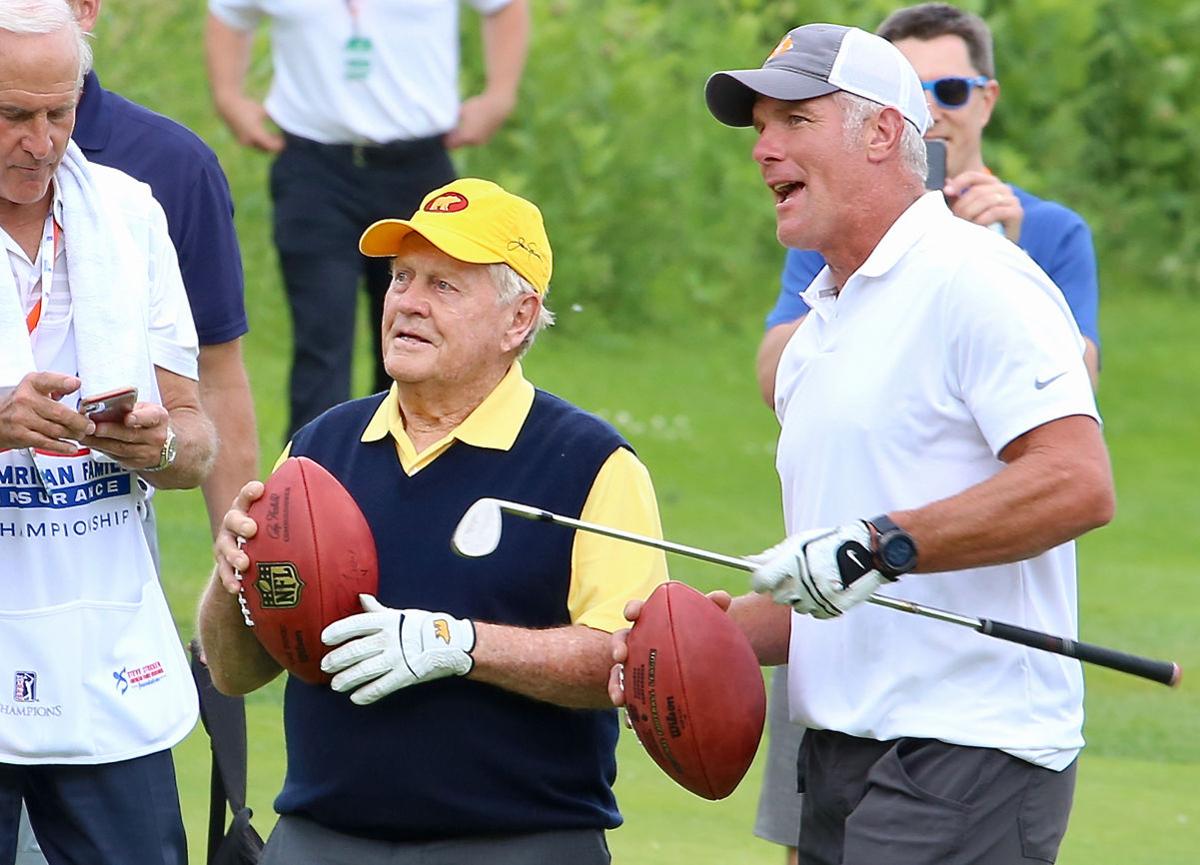 Brett Favre and Jack Nicklaus were part of the celebrity foursome at the 2019 AmFam Championship.

Public grandstands, Brett Favre and a significant chunk of its generous gallery will be among the tournament staples still missing in June, but — after being idled in 2020 due to the COVID-19 pandemic — the American Family Insurance Championship will be back.

Tickets go on sale May 11

New this year, tickets for the tournament portion of the 2021 American Family Insurance Championship June 11-13 will be sold on a per-day basis starting May 11.

Military personnel, first responders and children 18 and under should visit amfamchampionship.com for special admission opportunities.

Fans who purchased and kept their tickets for the 2020 championship will be contacted directly by tournament officials to select their attendance day in 2021.

Tickets and additional information on ticket availability can be obtained online at amfamchampionship.com under the "Get Tickets" link.

Tournament officials announced Wednesday that the PGA Tour Champions event will return June 11-13 to University Ridge Golf Course in Madison — with a series of measures developed by the PGA Tour, American Family Insurance and the University of Wisconsin, which runs the state-owned golf course, to ensure the tournament adheres to local and state COVID-19 protocols, according to a news release.

"Ultimately, our plan was a collaborative plan," AmFam Championship tournament director Nate Pokrass said in a telephone interview. "We made sure any restrictions that were in place, we are certainly following Dane County Health guidelines. Our plans are in place that UW felt comfortable with on their property."

Foremost among the changes for 2021 is reduced attendance to allow for safe social distancing throughout the course. Up to 5,000 attendees per day will be allowed on the 430-acre course grounds each day of the 54-hole tournament, a number that will include players, caddies, spectators, tournament staff and volunteers.

That is about 20 percent of the estimated 25,000 fans that have typically turned out for Saturday's second round when the likes of Jack Nicklaus and Lee Trevino have been featured along with Favre and two-time U.S. Open champion Andy North of Madison as part of celebrity foursomes in nine-hole exhibitions following the final group of the tournament. This year, neither the Saturday celebrity foursome nor the Friday night concert at Breese Stevens Field, which was to have featured Little Big Town and the BoDeans, will be held.

The UW Carbone Cancer Center Race for Research, a five-kilometer run/walk scheduled for June 5 on the Thomas Zimmer Cross Country Course at University Ridge, will also not be held this year.

"When we did the math about viewing space throughout the entire golf course, it's over 1.4 million square feet of viewing space," Pokrass said. "When you create a six-foot distance between every individual, that allowed us in theory to get to 50,000 fans. We're going an extremely conservative approach based on 10 percent of the venue capacity and that's where we landed on the 5,000 per day.

"We're erring on the side of (being) conservative and health and safety and going down that path. It will be a smaller crowd than what we've seen in the past. At the same time, we're more than thrilled to be able to have fans watch the tournament this year just being able to have it."

Face coverings will be required for all spectators, staff and volunteers unless actively eating or drinking, the news release said. Eating and drinking will not be allowed within 10 feet of the spectator rope line. Concessions services, with limited menu options, will be available in selected locations on the golf course and Pokrass confirmed that spectators will be able to indulge in beverages offered by Leinenkugel and Molson Coors, both tournament sponsors.

In addition, there will be no public bleacher seating anywhere on the course. The news release encouraged fans to bring chairs and "sit in ways that help ensure physical distancing" as they watch Madison native Jerry Kelly, tournament host Steve Stricker and others in the 81-player field.

Pokrass told Wisconsin.Golf that corporate hospitality areas will again be erected around the 17th and 18th greens at University Ridge. He acknowledged that those areas will have "a slightly different design than in the past" and internal COVID-19 policies might prevent several corporate partners from throwing their support behind the AmFam Championship until 2022.

"We still have those opportunities on those two holes for corporate partners that are still able to participate," Pokrass said. "(Nos.) 17 and 18 will still have that tournament stadium feel with a number of partners and fans. There will still be a number of areas on both of those holes for fans who have general admission tickets to sit and watch as well so we'll still have stadium-like amphitheater feel as you go into 17 and 18 this year."

While the 2021 AmFam Championship might not generate the electricity it did its first four years, Pokrass said tournament officials were glad to be able to meet the guidelines set forth by Dane County and UW and the deadlines of operational vendors to be able to stage the event at University Ridge.

"The pandemic has certainly lasted longer than any of us had expected," Pokrass said. "It's certainly had its impact on the sports world. But seeing other sporting events happening — seeing the Brewers play, the Bucks play; seeing the Packers have fans late last year; seeing other PGA Tour events happening — certainly provided us that basis to feel like 'Hey, we can do this' and gave us examples and sample protocols.

"We knew we needed to build our own local parameters and we have done that and worked with all the parties to make sure we can execute this in a safe way."