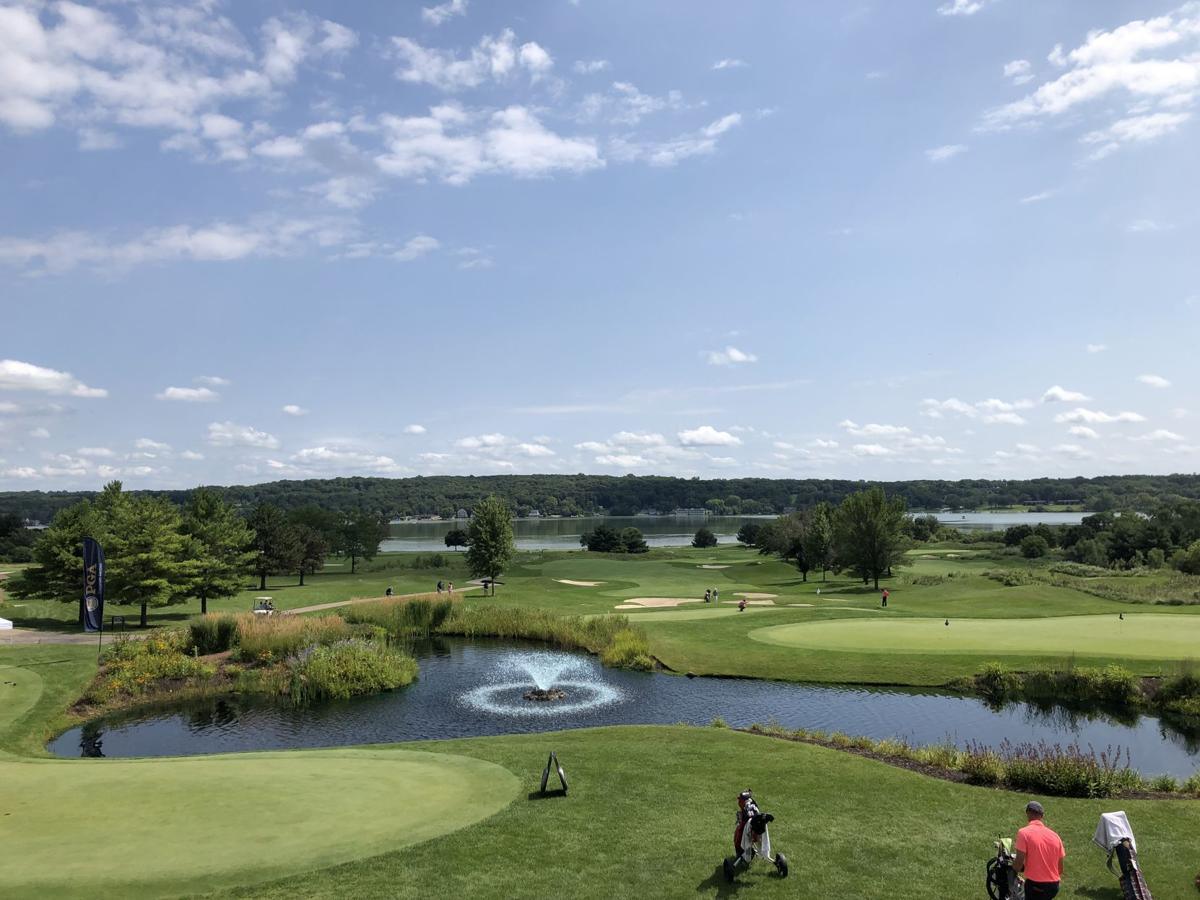 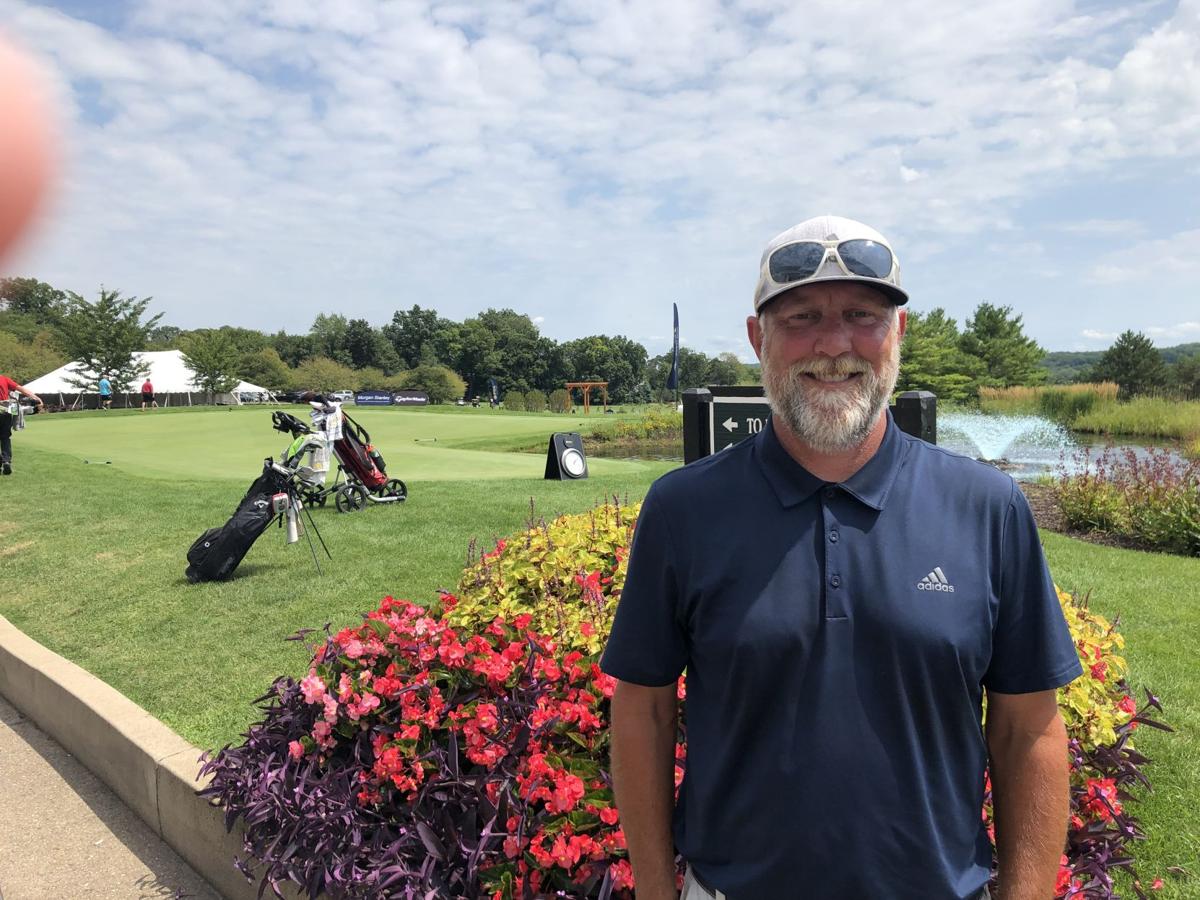 Kurt Mantyla was among the early first round leaders at 3-under. 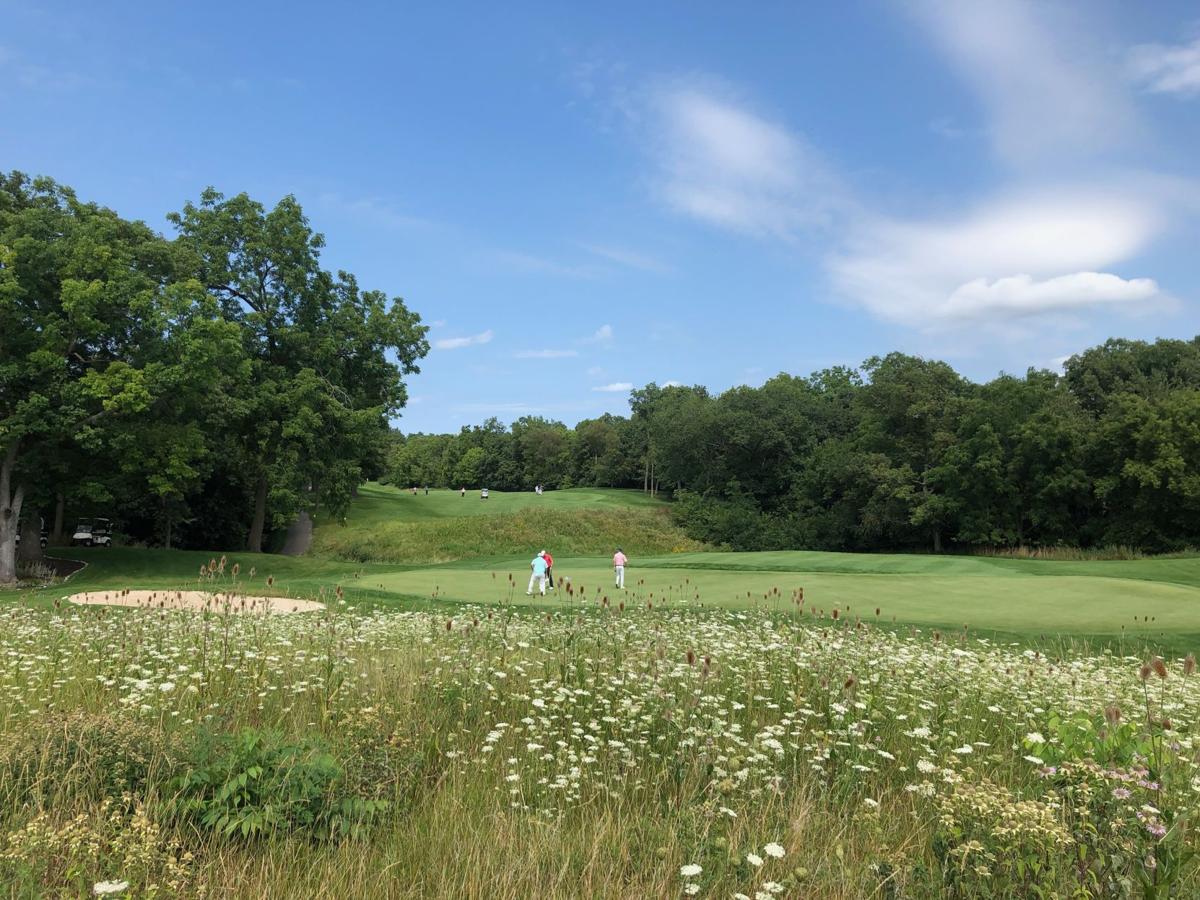 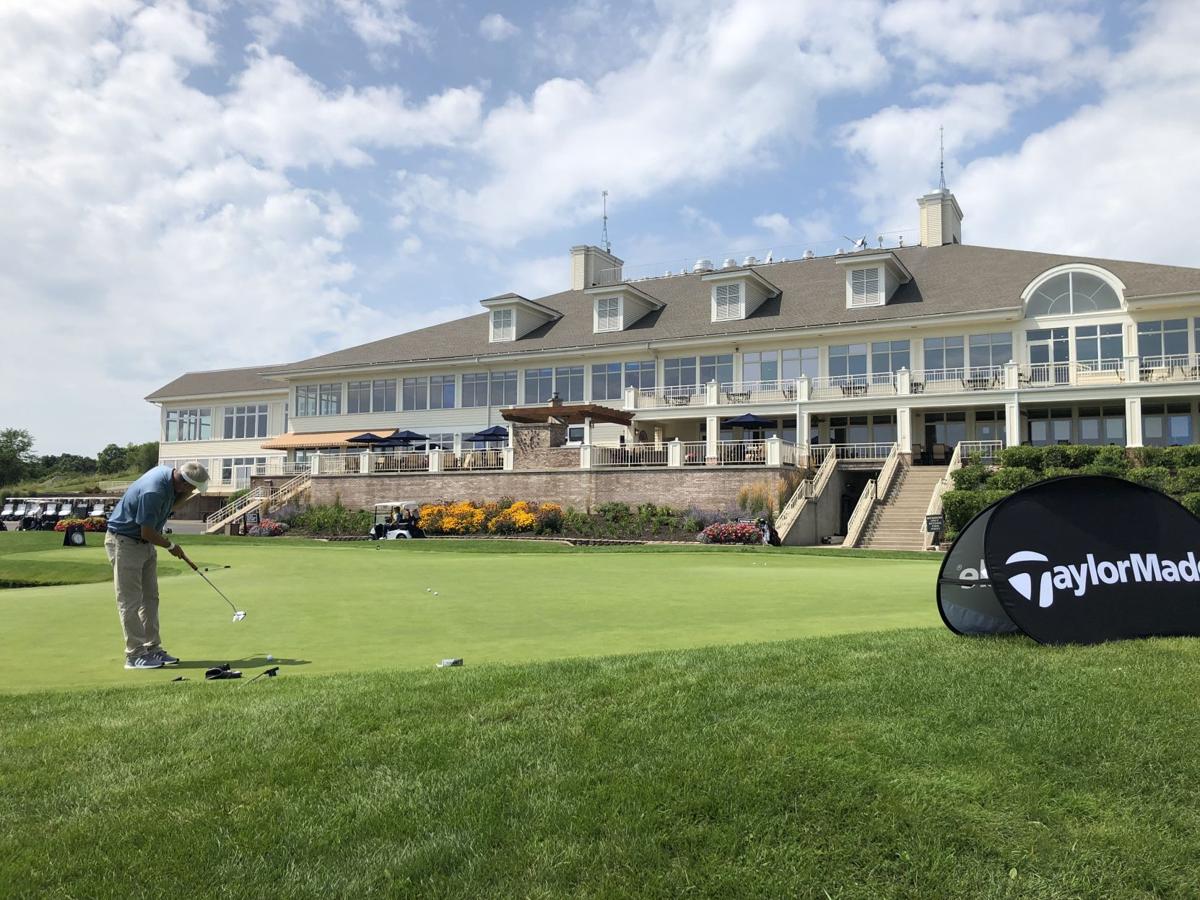 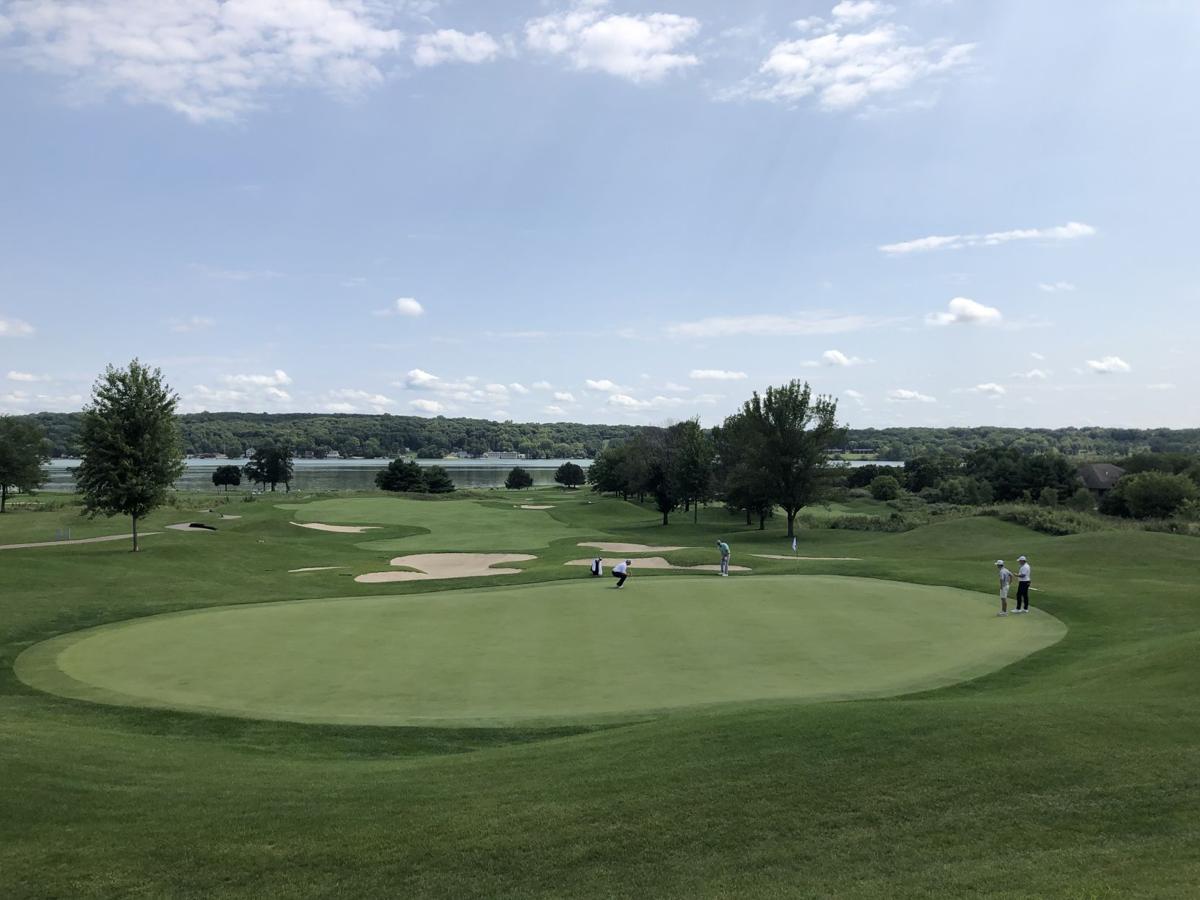 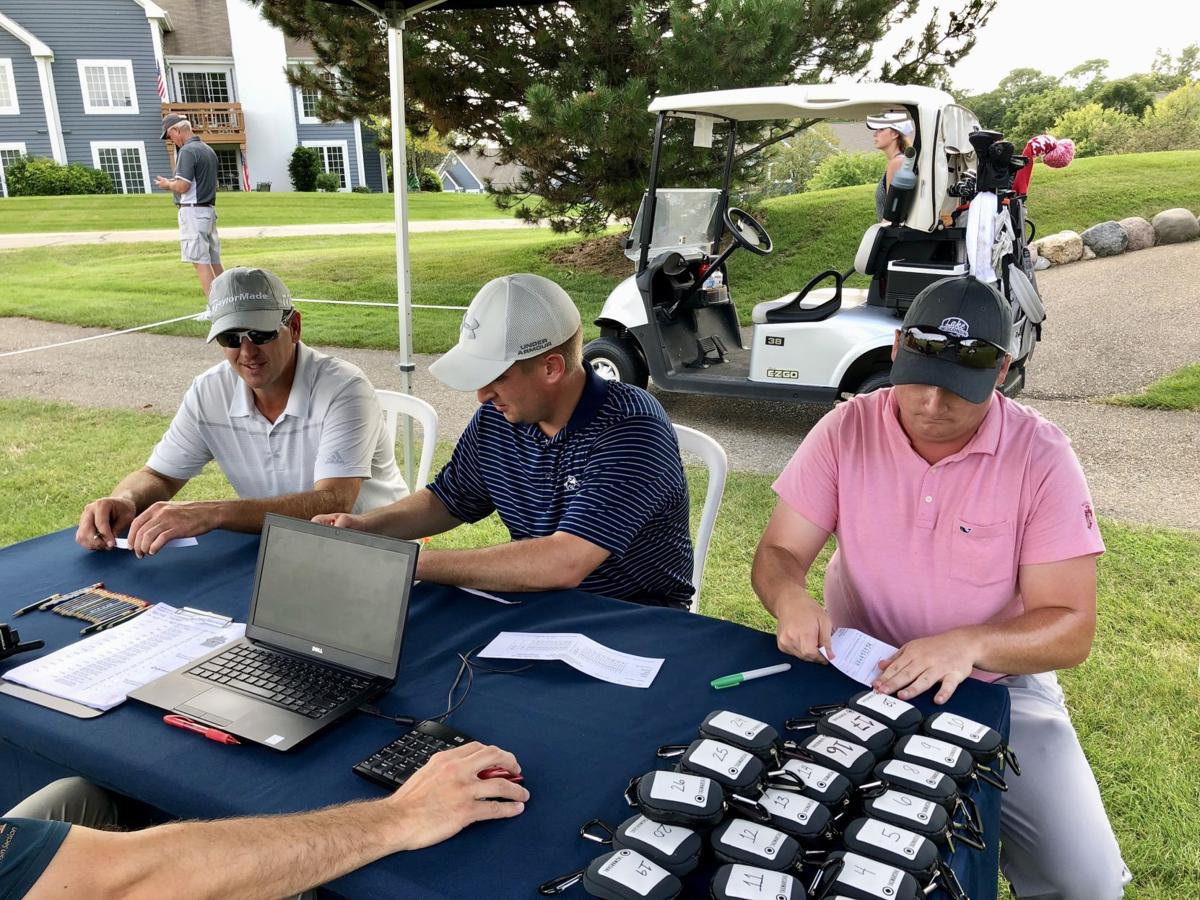 David Roesch, Owen Butler and Andrew Steinhofer sign their scorecards after the first round of the State Open. Steinhofer shot a 68 on the Trevino Course.

Dan Woltman, Beaver Dam.  The former University of Wisconsin golfer and three-time Wisconsin State Open champion opened defense of his 2018 title with a bogey-free 7-under-par 65 on the Trevino Course at Geneva National Golf Club in Lake Geneva and took a three-shot lead on Madison professional Andrew Steinhofer and Milwaukee amateur Jack Schultz after 18 holes of the 72-hole event. For Woltman, it was his fifth straight round in the 60s dating to 2016 at Blackwolf Run where he opened 69-65 but closed 73-76 to finish third. He did not play in the 2017 State Open at North Shore GC in Mequon.

Patrick Stolpe, Oostburg. The former Coastal Carolina golfer bounced back from a 37 on the front nine with a bogey-free 32 on the back nine to shoot 3-under 69 and stay within range of Woltman. Stolpe, 38, who now lives in the Phoenix area, is one of several golfers in the field taking advantage of changes to the Wisconsin PGA's residency rules to play in this State Open. It allows for any golfer who graduated from a Wisconsin high school or university to try to qualify for the annual gathering of the state's top pros and amateurs. He won the qualifier July 29 on the Irish Course at Whistling Straits in Haven with a 67.

David Roesch, Owen Butler and Andrew Steinhofer sign their scorecards after the first round of the State Open. Steinhofer shot a 68 on the Tre…

Andrew Steinhofer, Madison.  The 2012 State Open champion matched Woltman with a 3-under 33 on the front nine at the Trevino Course and pushed his total to 5-under through 12 holes before playing his six in 1-over to finish opening day in a tie for second place at 4-under 68. Steinhofer, 28, who slowed three years ago by a hand injury, has been working this summer as an assistant professional at Lake Wisconsin CC in Prairie du Sac. “The front nine, I’m not sure I had a putt outside of 20 feet the whole nine," he said. "I hit it good, didn’t really make much. But I’m not going to lie, it was kind of both hands on the wheel the last four holes.”

Hunter Eichhorn, Carney, Mich. The Marquette University golfer shook off an even-par 36 on the front nine, which included a double-bogey on the par-5 seventh hole, with a 33 on the back to shoot 69 and stay in contention after Day 1. After making his 7 on No. 8, the played his final 10 holes in 3-under thanks to birdies at Nos. 10, 12 and 14. He tied for sixth a year ago.

Kenosha's Jordan Elsen at a crossroads

Kenosha native Jordan Elsen, the 2016 State Open champion, fought back from a quadruple-bogey 9 on the par-5 10th hole of the Trevino Course to shoot a 1-over 73.

But Elsen, who lives in West Palm Beach, Fla., and caddies at famed Seminole, doesn’t know how much longer he’s going to continue to pursue a career as a professional golfer. To prepare for life after golf, he’s attended real estate school in Florida and plans to apply for his license.

“I’m still a pro, but I’m thinking about applying for amateur reinstatement,” he said. “It’s hard to give up the dream. That’s all I ever wanted to do when I was young.”

Kurt Mantyla was among the early first round leaders at 3-under.

Mantyla, who teaches at Naga-Waukee War Memorial Golf Course, has had a pretty good summer. In addition to winning the WPGA Match Play, his first major section victory, he proposed to his longtime girlfriend, Sami Forster.

On Monday, he was among the early leaders with his 69.

“It’s going OK,” he said with a laugh. “I mean, golf is confidence, you know? I just found a couple things, not so much ball-striking but maybe some strategy things I’m doing different. Trying to simplify it down a little bit, trying to make it a little bit easier.

“I haven’t been hitting it that great the last couple years so I’m trying to figure out a way to get the ball more in play. It’s more of an attitude change than anything else.”

‘I’ll be right there, coach’

Nate Thomson put off leaving for the University of Toledo for his senior year so he could play in the State Open. The Greendale native got off to a good start with a 69.

“I’ll go back Thursday,” he said. “I think our first tournament is like Sept. 14, we’re at Duke, so we’ll probably start (team practices) right when I get back.”

“Last year at Pebble I think I was just really nervous,” he said. “I think that’s why I played bad. I think Pinehurst was 10 times harder than Pebble last year. Just a couple shots I wish I had back. I think I missed (match play) by four, but I was happy the way I played. It’s an incredible place.”

Conflicted about the cut

Two-time State Amateur champion Bob Gregorski of Menasha opened with a 75 on the Trevino Course. He’ll fight hard Tuesday to make the 36-hole cut. But if he doesn’t …

Gregorski was 2-under after nine holes, but missed a 3-foot birdie putt on the 10th hole and then made a triple-bogey on No. 11.

With the greens softened by rain on both courses, many golfers had problems controlling the spin on their approach shots, particularly with short-irons and wedges. At times, balls that landed in the middle of the green spun backward 20 or 30 feet. “After the first shot of the day I saw the way they were going to react,” Woltman said. “I hit more three-quarter shots today than I would normally. The three-quarter shots bring the spin down a little bit. But there’s a point where it doesn’t matter what you do. They’re just so soft. The rest of the golf course is in great shape. Hopefully, the greens will dry out.” ... Burlington native Tony Romo had a quadruple-bogey 9 on the par-5 seventh hole on the Palmer Course but also had the only eagle of the day on the par-5 17th. He shot a 77. … Austin Gaugert of Lake Geneva, who caddies for Jordan Niebrugge on the Korn Ferry Tour and Casey Danielson on the Symetra Tour, shot a 70 on the Palmer and was tied for 12th … The scoring average was 75.64 on the Trevino and 76.95 on the Palmer. Schultz led the field with eight birdies and Thomson and Woltman each had seven.