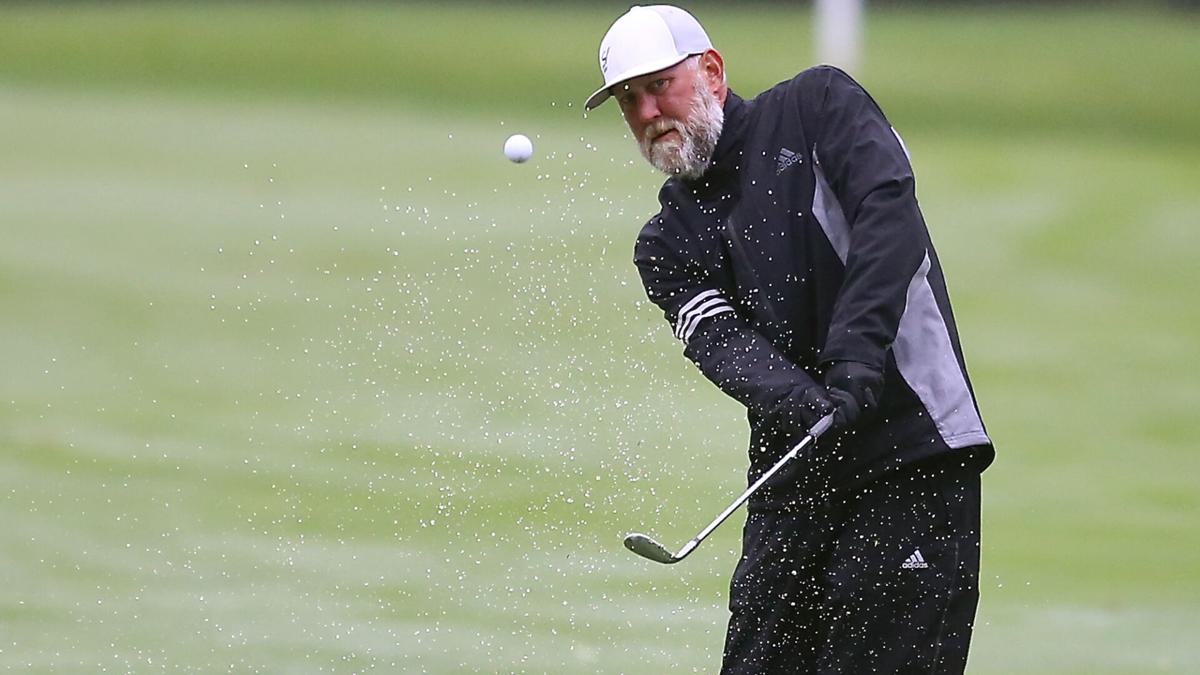 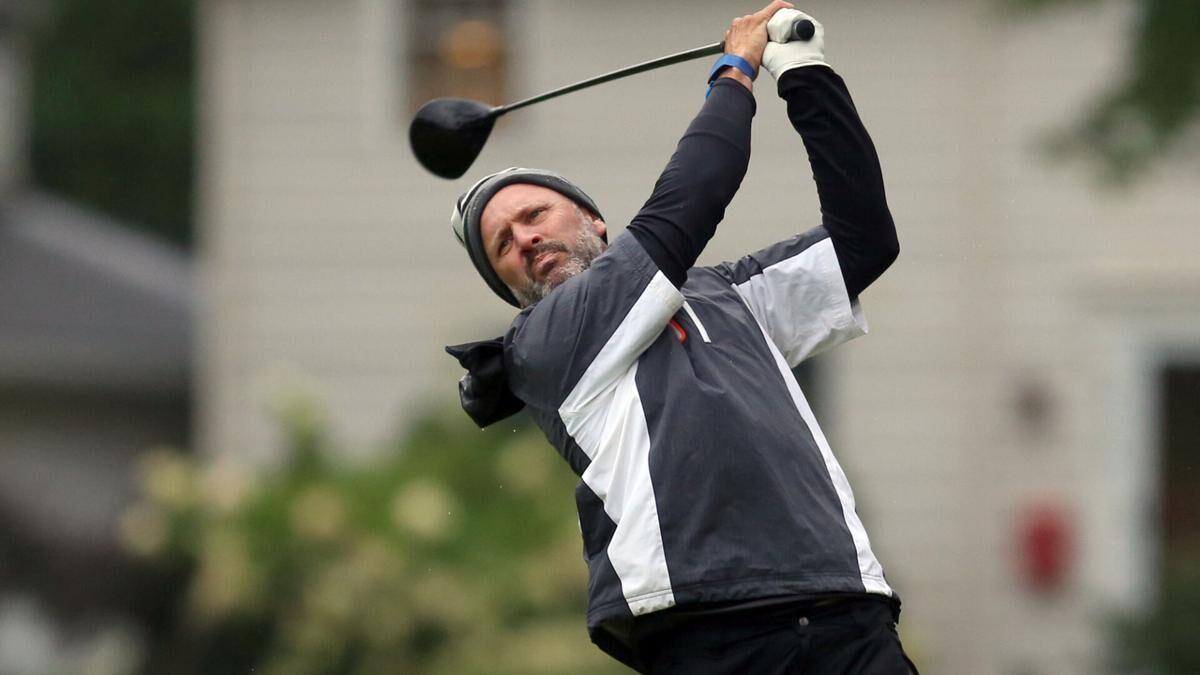 Michael Crowley admitted he was mildly amused over the weekend when he saw rain predicted for Madison, knowing his title defense at the Wisconsin State Senior Open would begin Tuesday at Blackhawk Country Club.

It was a year ago this week the Fox Point golfer braved the elements a few miles away at Nakoma Golf Club, pulled away from Kurt Mantyla and put a halt to Jim Schuman's two-year reign in this event for golfers 50 and older.

"I laughed when I saw the rain in the forecast and I thought 'Well, this definitely plays to my advantage,'" Crowley said, remembering how he one-putted six of the last eight greens at Nakoma as the sky opened and the rain came pouring down before he birdied Nos. 17 and 18 to topple Schuman by one stroke and Mantyla by two to prevail in his State Senior Open debut.

But as good as Crowley was Tuesday in making three birdies in a row starting at No. 10 on his way to a 2-under-par 70, Mantyla was just a skosh better.

Mantyla, 51, the teaching professional at Naga-Waukee War Memorial GC in Pewaukee, went birdie-eagle-par-birdie during the middle of the back nine after an hour-long rain delay and shot 4-under 68 to open up a two-shot lead over Crowley, 51, the head professional at Morningstar Golfers Club in Waukesha and amateurs Rocky Sperka of New Berlin and Chip Summers of Richfield. Franklin amateur Brian Brugger (71) was the only other golfer (of the 93 in the field) to break par, although Pewaukee amateur John Kestly, Menasha amateur Bob Gregorski, the newly minted Wisconsin State Senior Amateur champion, and Schuman, a three-time champion, matched it.

"I didn’t play well at the State Open (in Kohler) or, really, not that well for the past few weeks or so," Mantyla wrote in a text to Wisconsin.Golf. "I’ve played a hold-on fade for a long time, and have made a concerted effort to swing the club freely, which in turn has me hitting it a little straighter, even hitting more of a draw. That has been a huge change, so we will see how it holds up under pressure. (Tuesday) was good, so hopefully I can do it again (Wednesday)."

With 12 golfers within five shots of the lead — including Madison native Mario Tiziani, the Minnesota State Senior Open champion, and Brookfield native Tim Cantwell, who won the Wisconsin State Amateur at Blackhawk in 1993 — and a sun-splashed day expected Wednesday, Mantyla and Crowley expect a fair amount of traffic as they chase each other on the leaderboard in the finale.

"There are a lot of good players that are all within striking distance," Crowley wrote via text message. "And Blackhawk is a golf course that can surrender some birdies, but you have to be careful on a few holes out there for sure."

Indeed, Summers and Sperka found out first-hand Blackhawk's tendency to giveth as quickly as it taketh when it comes to surrendering low numbers.

Summer, 50, making his State Senior Open debut, bogeyed three of his first four holes before righting the ship. He made a birdie at No. 7 to turn in 38 and then added four more birdies on the back nine, starting birdie-birdie at Nos. 10 and 11 and finishing with a pair of 2s at Nos. 16 and 18, rolling in birdie putts of 7 and 15 feet to pull within two of Mantyla, his old college rival when Summers competed at UW-Stevens Point and Mantyla teed it up for UW-Eau Claire.

"I started out a with a few bogeys, but hit a solid shot into (No.) 5 that started to turn things around," Summers wrote via text to Wisconsin.Golf. "I felt good about my game coming into this event and will head into (Wednesday) with the same mindset … play the best golf that I can. I like where my short game is and feel good about my chances with the putter in my hands."

Sperka, who matched Kestly and Greendale's Jeff Lister for low-amateur honors last year at Nakoma, began his opening round this year on No. 10 and parred his first five holes before going birdie-bogey-birdie en route to a 1-under 35 on his opening nine. He finished much the same way, going bogey-birdie-bogey-birdie starting at No. 6, but likes his position entering the final round.

"(The) birdie on (No.) 9 was a nice finish," wrote Sperka, who hit a lob wedge from 70 yards to within a foot for a tap-in birdie and a "stress-free finish" to his round. "I need to make confident swings and make some putts tomorrow. Kurt is a really good player but lots of other guys who are very capable of shooting a good score at Blackhawk."

Recent history suggests Mantyla and Crowley will be at the front of that line.

After battling down the stretch a year ago at Nakoma, the two were involved in a three-player playoff for individual honors at the WPGA Senior Professionals Championship on Crowley's home course at Morningstar GC. Mantyla won that one over Crowley and John Freeman of Edgewood GC in Big Bend with a birdie on the first extra hole after all three finished 36 holes of regulation at 6-under 138.

"I suspect the pins will be in some good spots (Wednesday), so it could definitely play more difficult," wrote Mantyla, whose goal is to take what the course gives him and wear a smile while he does it. "I haven’t been playing with a very good attitude as of late, and as a result I haven’t been playing as well as I would like to play, and most importantly, I have been miserable out on the course. My goal is to play golf like I did as a kid, when I couldn’t wait to get out there to play golf! Whatever the outcome is, I’m going to enjoy being out there and give it my best shot!"