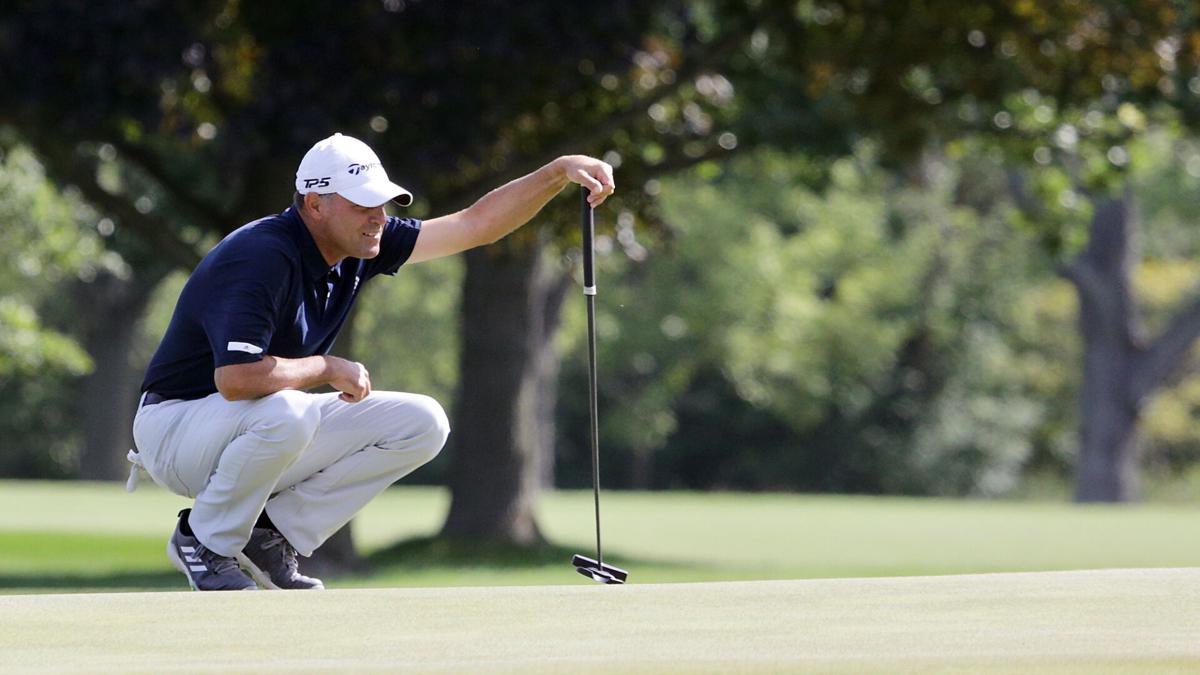 Jim Schuman, the director of instruction at Blue Mound Golf & Country Club, studies his putt on the 18th green on Monday during the first round of the Wisconsin State Open. 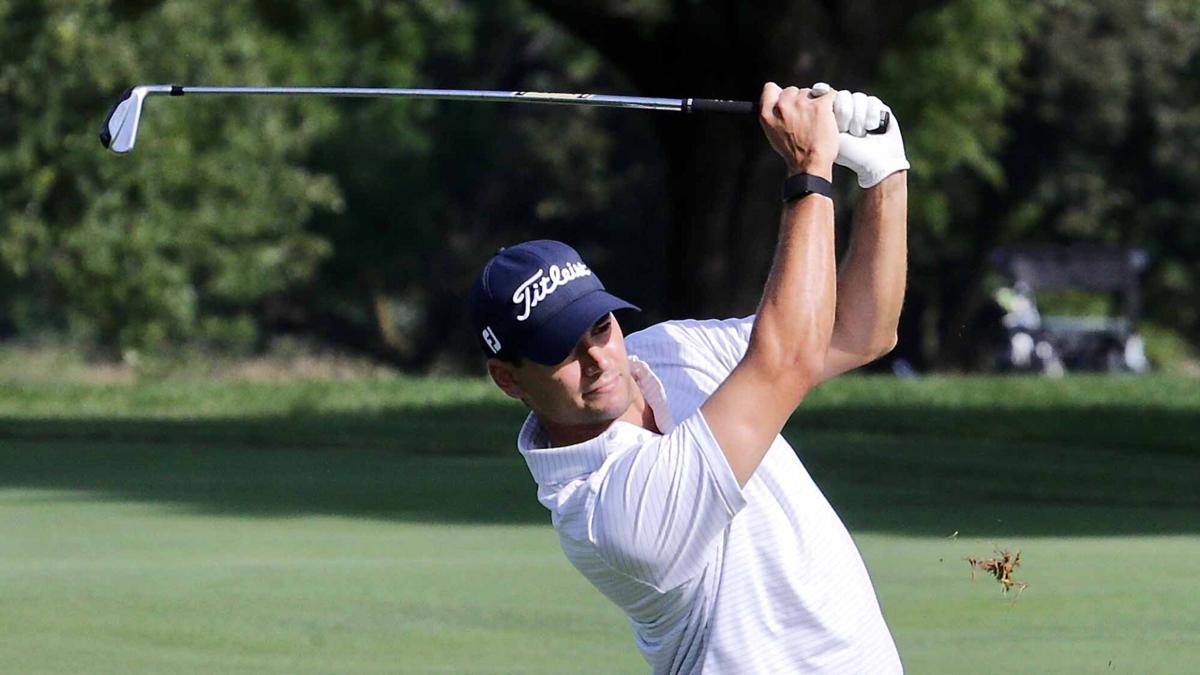 CJ Swift of Naples, Fla., was the early first-round leader at the 2020 Wisconsin State Open being played at Blue Mound G&CC. 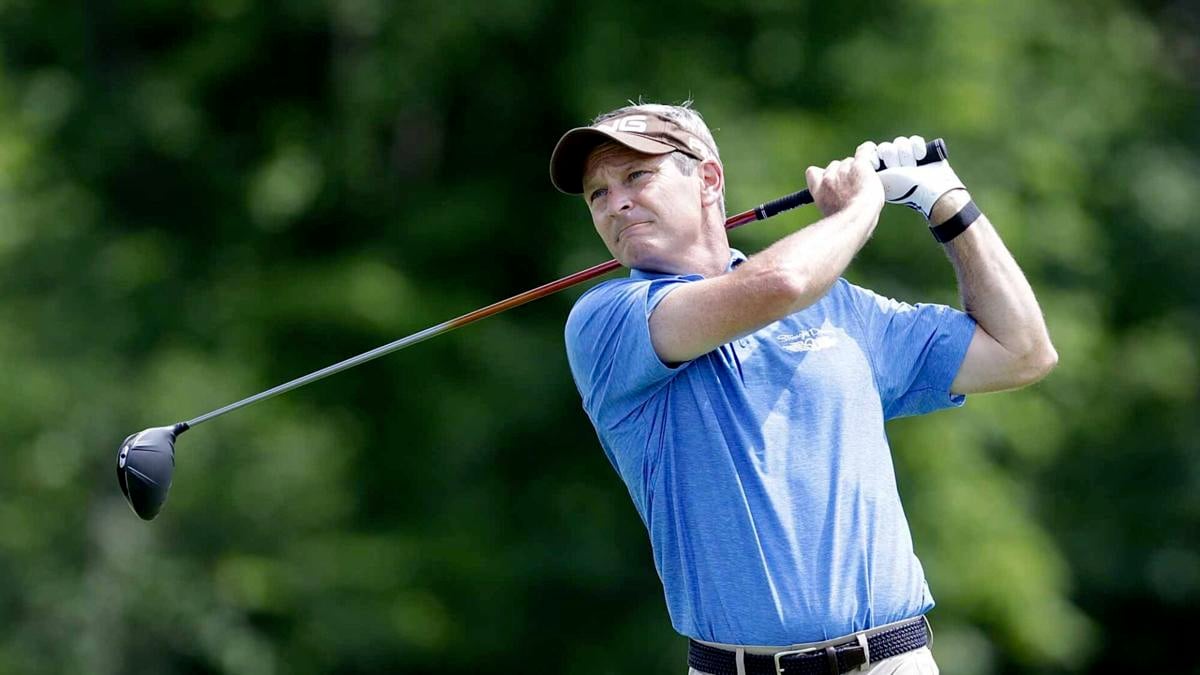 Mark Wilson hits a drive during the first round of the 2020 Wisconsin State Open. 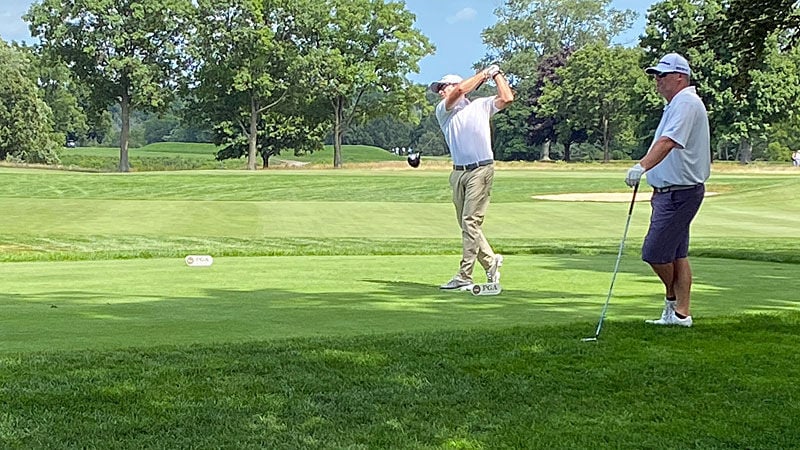 Four-time champion Dan Woltman hits his drive on the first hole Monday during the opening round of the Wisconsin State Open at Blue Mound G&CC. Two-time champion Ryan Helminen looks on.

WAUWATOSA – With its wall-to-wall carpet of perfect turf and its greens acquiring a whitish sheen and stressing the Stimpmeter, some are calling Blue Mound Golf & Country Club the “Augusta National of the Midwest.”

The massive greens, double-cut and rolled twice daily by superintendent Alex Beson-Crone's crew, are Blue Mound’s first and last lines of defense. How fast were they Monday in the first round of the 100th Wisconsin State Open? Let’s just say there’s more friction on linoleum.

Who's who at the 100th Wisconsin State Open: A look at the field teeing it up this week at Blue Mound G&CC

“I’ve got to say they’re every bit as fast as (PGA) Tour speed,” said Skip Kendall, who has made more than 700 starts in PGA Tour-sanctioned events. “I think they might even be faster. Once, at Memorial, they had them at 15 (feet on the Stimpmeter). But that was just one year. Other than that, I haven’t played greens faster than this, anywhere.”

Fitting, then, that the leaderboard was loaded with some of the biggest names in Wisconsin golf. Almost mini-Masters-like, you could say.

Two-time defending champion Dan Woltman, a Beaver Dam native who is trying to become the first golfer to win the State Open in three consecutive years, fired a 4-under-par 66 to share the lead with minitour pro Kaylor Steger of Mount Pleasant.

A trio of golfers with impressive resumes shot 67s and were tied for third: Brookfield’s Harrison Ott, who has had a monster summer and reached the Round of 16 at the U.S. Amateur last week; Longbella, the University of Minnesota standout from Chippewa Falls; and CJ Swift, a former Marquette University golfer who played for two years on the PGA Tour Latinoamerica.

Among those lurking just three shots off the lead with 69s were the 55-year-old Kendall, a native of Fox Point, and five-time PGA Tour winner Mark Wilson, a native of Menomonee Falls.

The cream always seems to rise to the top at Seth Raynor-designed Blue Mound, a course on which Walter Hagen, Gene Sarazan, Babe Didrikson Zaharias and Cary Middlecoff all won tournaments. Why would the State Open be any different?

Woltman, who has status on the Korn Ferry Tour, is trying to join the tournament’s four other five-time winners (Francis Gallett, Bobby Brue, Manuel de la Torre and Steve Stricker). He got off to a good start, but that’s all it was.

“Obviously, this is only a quarter of the way home,” he said. “I’ve got three more rounds to go. It was a solid round. It wasn’t great. I luckily made some (par) saves that kept some momentum going in the middle parts of the round. Overall, I’m happy.”

The key save occurred on No. 11, when he missed the green with a wedge but got up and down, rolling in a slippery 12-footer for par.

“I had just hit it under the lip of the fairway bunker on 10 and made my only bogey of the day,” Woltman said. “There was a two-group backup on No. 12, so I would have had to stand around for 20, 25 minutes thinking about back-to-back bogeys. So, to make that putt was nice.”

He then birdied Nos. 16 and 18 to join Steger atop the leaderboard.

“The golf swing didn’t feel good today,” he said. “I had a couple loose swings. But I saved some shots when I needed to. Hit some good bunker shots. Was able to hit the driver well on a couple holes that got me greenside and I was able to get up and down for birdies. I took advantage of the two par-5s and didn’t really get into that much trouble, which obviously is really easy to do out here.

“Overall, it was good. It wasn’t great, but obviously anytime you shoot 66 around this place you’ve played some good golf.”

Steger, 24, who has played minitour events mostly in the Midwest this summer, would have had the lead alone if not for a bogey on the par-5 18th. The left-hander had just 169 yards for his second shot but missed the green pin-high right with an 8-iron and needed four more shots to get down.

“Yeah, that one hurts a little,” he said. “That stings, especially after having 8-iron into the green. I just pulled it a bit and made it a little sloppy finish, but oh well. I played well throughout otherwise. Hit my driver well and the putter was pretty hot through the beginning and middle stretches.”

Vanderbilt University’s Ott has played a lot of golf this summer and had strong showings in the Western Amateur and the U.S. Amateur, both of which have grueling stroke play-to-match play formats. Burnout, however, is not an issue.

“It’s not too bad, honestly,” he said. “I took a break. I didn’t do anything Saturday except for go to the pool. I’m not too bad. It could be worse, for sure.”

Ott said he benefited from being paired with Wilson, who eagled the par-4 sixth, their 15th hole, and finished with a birdie on No. 9 to get into red numbers.

“We were having a good time,” Ott said. “Mark was talking to us, being really friendly. He’s really cool. Really nice guy. Super down to earth.”

Longbella picked up where he left off at Milwaukee CC three weeks ago, despite having not played a practice round at Blue Mound. He made six birdies and three bogeys.

“I showed up today and my game was the same as it was in the final round at Milwaukee,” he said. “I didn’t know the course at all. I played it probably either in eighth grade or freshman year of high school. I got out here and I didn’t really recognize it. My dad does a lot of research on the computer and he kind of drew me out a little plan. Playing with Dan (Woltman) was helpful, too. He knew the course and he helped me out in some spots.”

For Swift, 28, who has played on various minitours and on the PGA Tour Latinoamerica, this is his final tournament as a professional. He is applying for amateur reinstatement Thursday.

“One, I’m getting married and, two, I kind of fell into some bad habits with the swing and kind of lost passion for it,” he said. “It’s tough. If you’re not shooting 68 consistently, it’s tough to make money, it’s tough to make a living. It was just the right time. I’m ready to get my amateur status back, play a couple amateur events and just enjoy it again.

“I wanted this to be my last one because it’s Blue Mound. I only got to play here once in college. It’s truly special.”

Besides Kendall and Wilson, the others at 69 were Marquette’s Tyler Leach, who tied for second at the State Amateur; fellow amateur Danny Behm of Hubertus, and club professional Kraig Joy of Appleton.

Kendall, who counts Raynor among his favorite architects, could have spoken for many in the field when he said he was impressed with Blue Mound.

“I love this course,” he said. “It’s right there in front of you but it’s so difficult. The green complexes are very difficult. It’s a test. It’s great. It’s what it should be.”