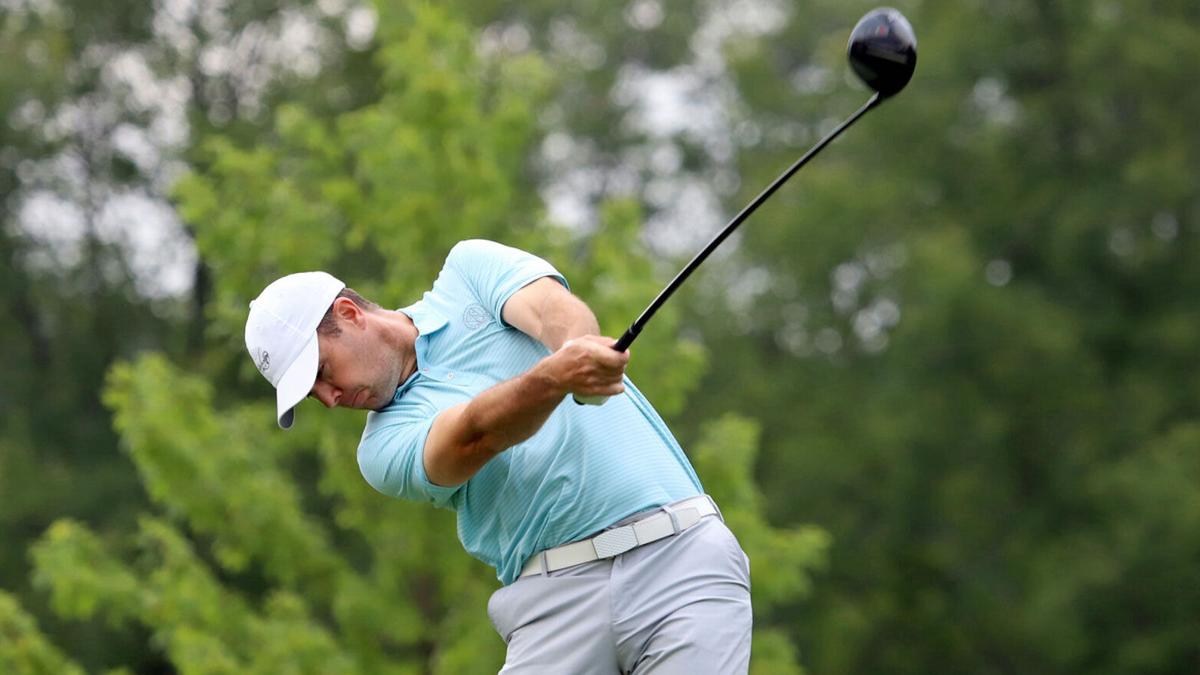 Joe Weber hits a drive during the 2021 Wisconsin State Amateur. 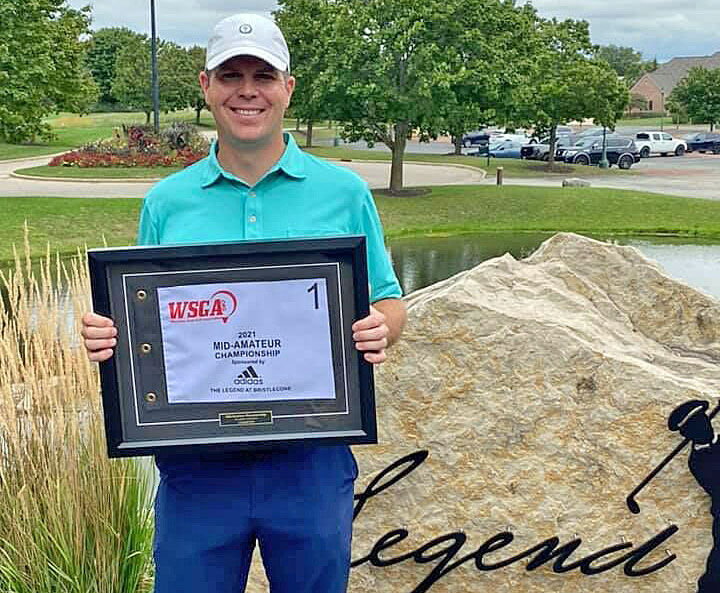 Joe Weber's success in the Wisconsin State Men's Mid-Amateur Championship is starting to become legendary. Or, better yet, Legend-ary.

The West Salem golfer won the eighth annual championship for golfers age 25 and older for the second time Tuesday at the Legend at Bristlecone Golf Club in Hartland, catching Milwaukee's Jack Schultz down the stretch to finish with matching 3-under-par 68s before edging him in a playoff with a birdie on the first extra hole. Weber, who birdied Nos. 16 and 17 after Schultz bogeyed the latter hole to force a tie at the top, made an incredible par on No. 18 during regulation to give himself a chance at his first Mid-Am title since 2017 when he shot 65-68 at The Legend at Bergamont in Oregon to win by three shots.

"I do like both of those courses," Weber joked in a text to Wisconsin.Golf after surviving what became an 18-hole shootout following the cancellation of the opening round Monday due to severe weather and heavy rain. "I was looking forward to playing (Bristlecone) twice. It's always unfortunate when weather changes an event, but it happens. My mindset never really changed.

"(The reduction to 18 holes) just makes it harder to come back from big mistakes so my goal was to minimize them as much as possible."

Weber, 37, who has finished inside the top 10 at all eight Mid-Ams including two runner-up finishes to go with, now, his two victories, made six birdies and three bogeys during regulation. However, his work the final two holes of regulation to catch Schultz was, indeed, the stuff of legends.

"I didn't look at the leaderboard until after I hit my tee shot on (No.) 17," wrote Weber, who birdied the hole moments after Schultz pulled his tee shot on the par-3, chipped to 10 feet and missed the par putt. "Before that, I wasn't hitting it well enough to care. I was just trying to get it in play off the tee and get it on the green. That wouldn't have changed if I was (3-)up or 3-down.

"But when I looked I was 1-down so I knew I needed to make it so that, if Jack made birdie on 18, I would still have a chance. It was a very tough putt that broke over 5 feet so it was kind of lucky it went in."

Luck proved to be on Weber's side again on No. 18 where he snap-hooked a 3-wood off the tee and toward the fairway for the first hole.

"Then I had to play it over the pool and (out-of-bounds area) to try to get it on the green," Weber wrote. "After I hit it, I wasn't sure I was in play. I found it short left (of the green) and then hit a great chip to get it to 8 feet and made the (par) putt. Very stressful."

Weber took the stress out of the proceedings in the playoff, splitting the fairway playing No. 18 a second time with a hybrid instead of a 3-wood and hitting his approach shot to 10 feet before rolling in the birdie putt. Schultz's drive kicked into the rough behind a tree branch, a tough break. He hit his approach shot over the green and chipped back to 6 feet but never got to putt the ball after Weber made his birdie putt for the victory.

"Until (No.) 9, I had five putts from five to 20 feet slide by that could have gone in," Schultz wrote via text after making birdies at Nos. 10, 12, 13 and 15 to get to 4-under before his bogey at No. 17. "I had a few other putts in that range that missed on the back nine, too. I started off a little shaky with some not great approaches, but I started hitting it better and better as the round went on to the point where I had birdie looks on every hole for a good stretch. I felt like the 3-under I shot was as high as I could have scored (Tuesday)."

But that was the point of entering the Wisconsin Public Links Association 36-hole championship Saturday and Sunday and this event, which was to have been another two-day event until Mother Nature had other ideas Monday morning.

"I wasn’t too happy with how the State Open ended, so I signed up for these after to try to show to myself that I can be better than I was there," wrote Schultz, who shot 72-72-74-72 to finish 15 strokes behind repeat champion Harrison Ott of Brookfield. "The timing of WPLA and the Mid-Am were great so I was able to play for a few days in a row with expectations to get better each day because I’m able to see how the game is and make adjustments and learn. (I) definitely had that going (Tuesday) with so many good shots, but I left a ton out there.

"It's disappointing to not do as well as I could have."

"It means a great deal to me to win any WSGA championship," wrote Weber, who will play with partner James DeBoer next week at Washington County GC in Hartford in the WSGA Two-Man Team Championship — an event he won twice with partner Josh Dirks, the last time in 2016 at (you guessed it) The Legend at Bergamont. "There are only a few of them and anytime I can get a win, it's always very special."