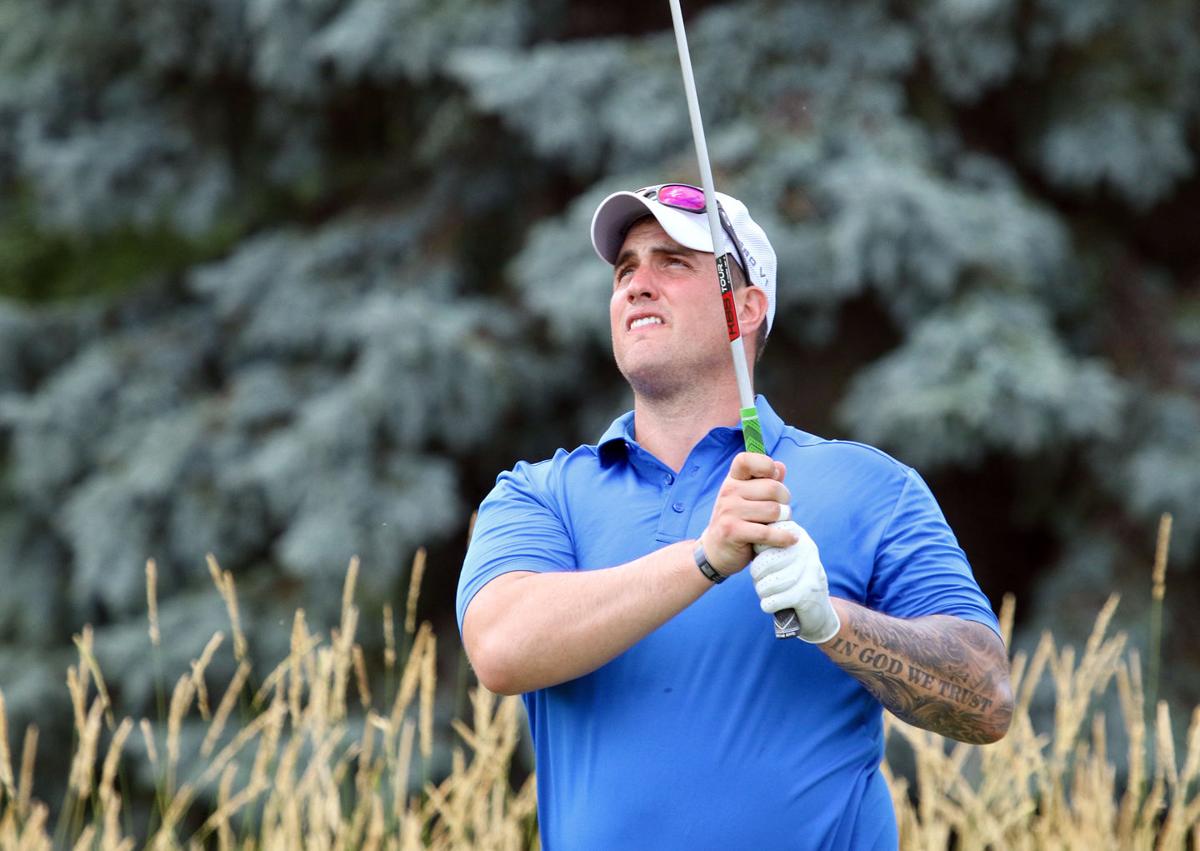 Brent Bartels watches his tee shot Tuesday during the second round of the Wisconsin State Amateur Championship being played on the Links Course at Lawsonia. 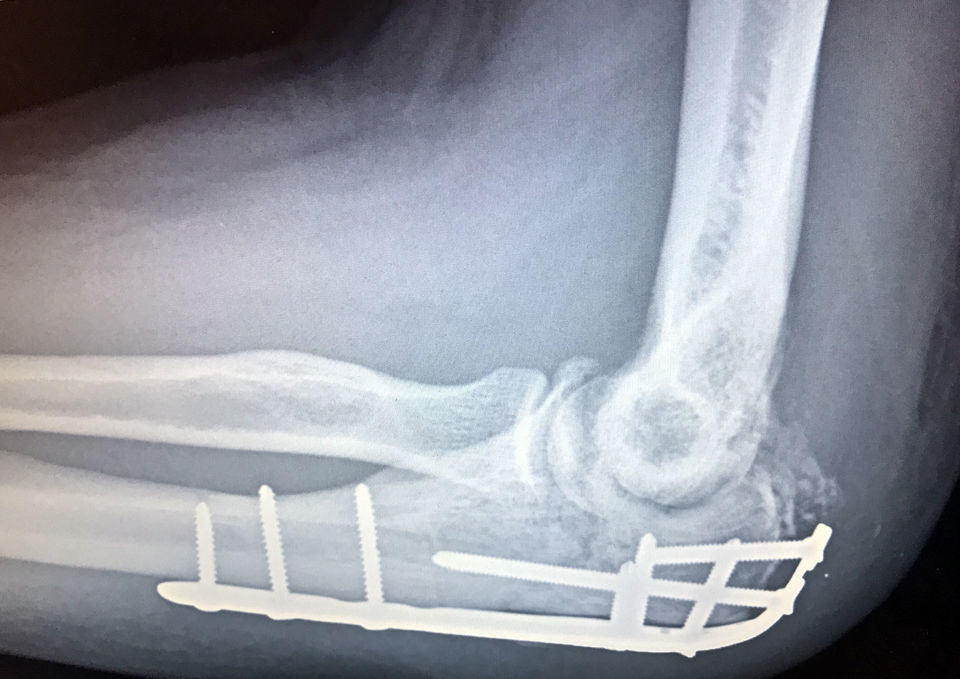 An X-Ray shows the extensive damage, and hardware, in Brent Bartels' left elbow. 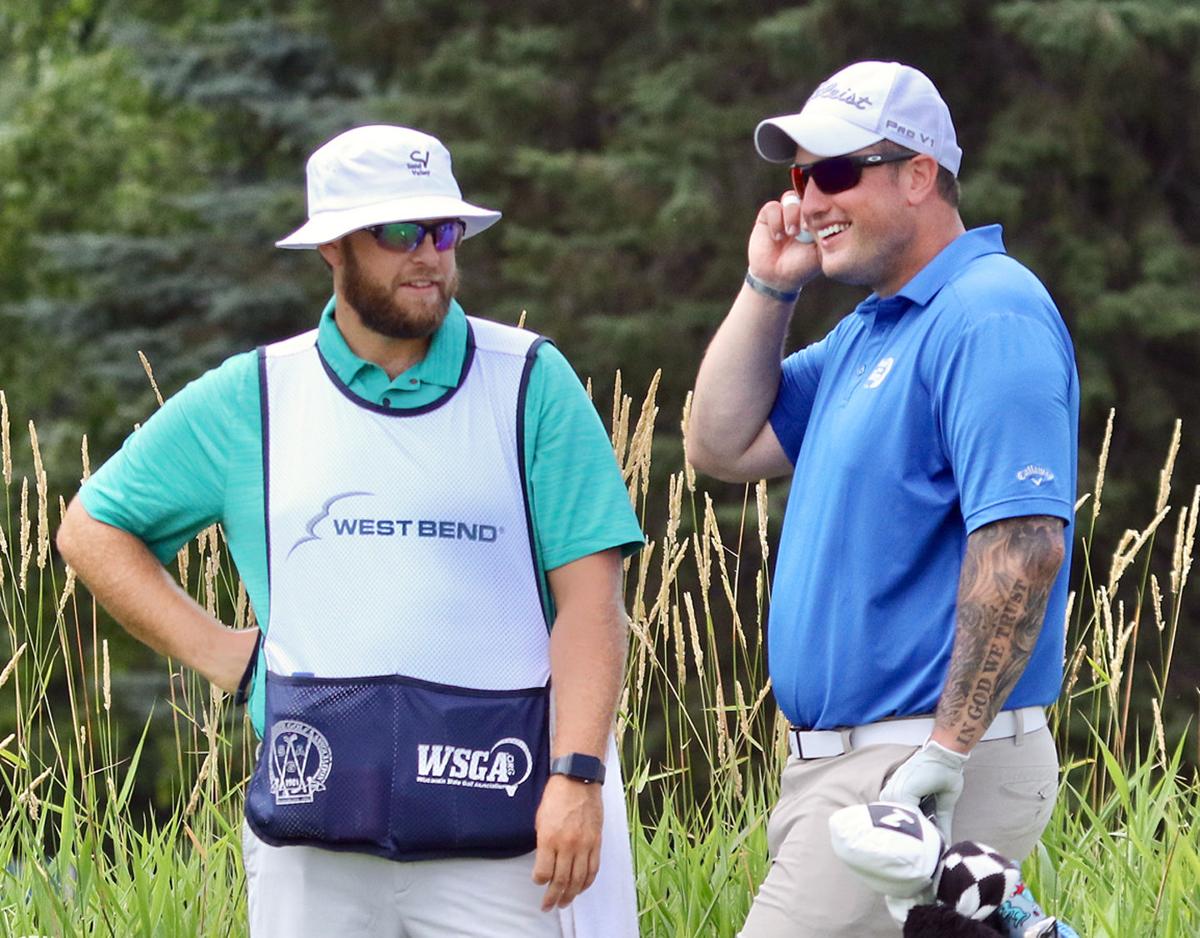 Brent Bartels, right, shares a laugh with caddie Max Hosking during the second round of the Wisconsin State Amateur. 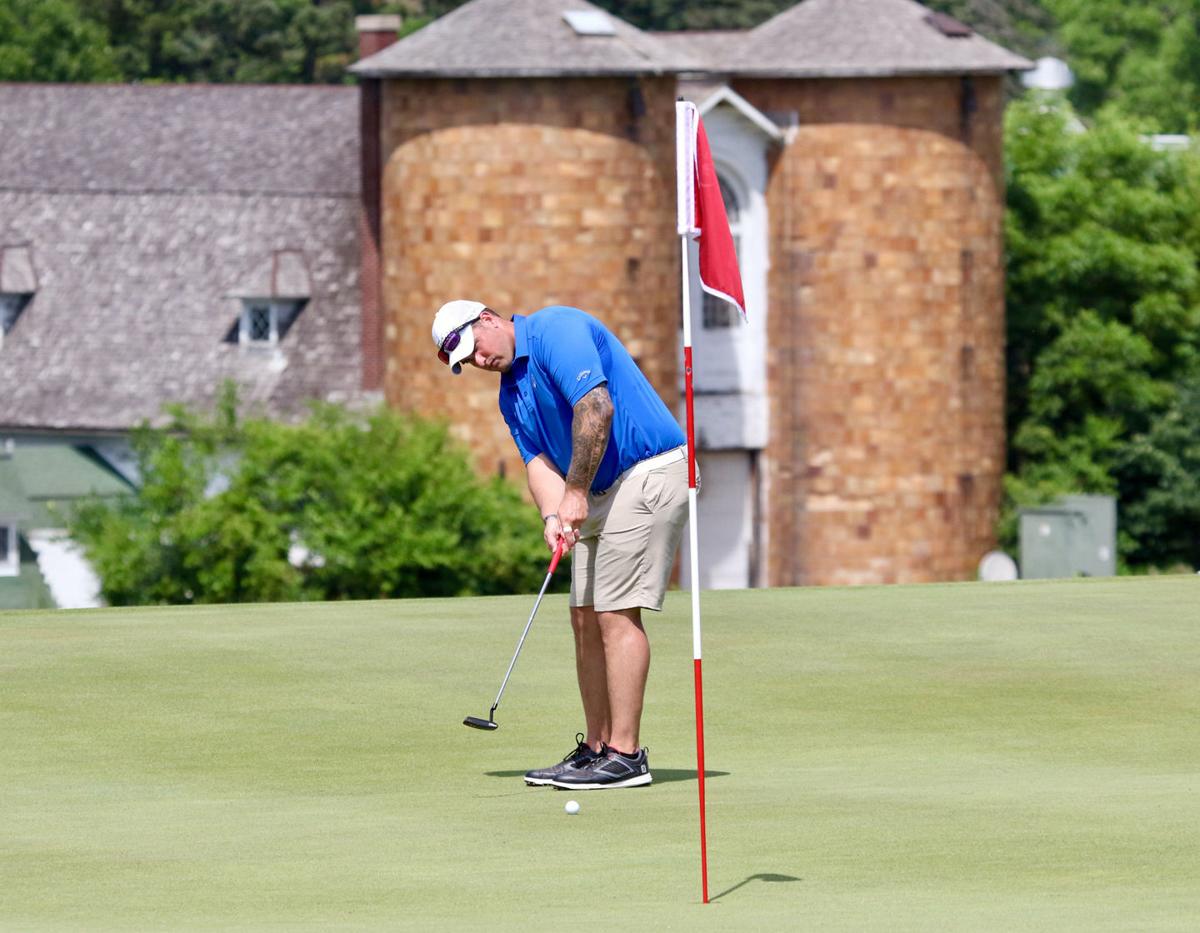 Brent Bartels watches his putt during second round action Tuesday at the Wisconsin State Amateur Championship.

GREEN LAKE – The sun was low in the sky Tuesday evening as Brent Bartels entered the scoring tent after the second round of the 118th Wisconsin State Amateur Championship, an ear-to-ear grin plastered to his face.

Moments earlier, he had rolled in a white-knuckle, 8-foot, par-saving putt on the 18th hole, his ball circling the inside perimeter of the cup counterclockwise before dropping. He knew he needed to hole the putt to make the 36-hole cut, and he did it. Nothing in golf is more satisfying than producing under pressure, no matter the stakes.

At 33, and 15 years removed from his only other State Amateur appearance, Bartels shot 81-73 on the Links Course at The Golf Courses of Lawsonia and was the last of 76 players to advance.

“It was a grind,” he said, his face beet red from a long day in the sun. “It feels pretty good, actually. It’s a pride thing. You want to do well.”

As important as the State Amateur is, though, in the bigger picture it’s just golf.

“Guys make bogeys and complain,” Bartels said. “I’m like, you know, there are a lot worse things in life. I wanted to make the cut, obviously, but whether I did or didn’t, it wasn’t the end of the world.”

Most of the players in the field have no idea they are playing alongside an American hero. And that’s perfectly fine with Sgt. First Class Brent Bartels, who, like most heroes does not consider himself one. He’s just one of the guys here, trying to beat the heat, figure out the massive greens on the Links Course and enjoy a beer and some laughs in the clubhouse afterward.

With apologies to the young men who are trading birdies at the top of the leader board, though, the guy who just barely made the cut, the active duty soldier on leave from Fort Bragg, North Carolina, is the best story here. Or just about anywhere.

It’s only by the grace of God, he believes, that he can even share that story. On Oct. 4, 2017, Bartels’ 11-man Operational Detachment-Alpha Team 3212 was ambushed by ISIS militants in west Niger desert scrub just outside the village of Tongo Tongo. The unit, undermanned and poorly equipped, was on a secretive mission to capture or kill a local militant leader, Doundoun Cheffou.

And everything went to bloody hell.

Four American soldiers – Bartels’ buddies – were killed. The squad leader, Capt. Michael Perozeni, was shot in the back as the unit, supported by 30 Nigerian soldiers, retreated. He fell out of the truck Bartels was driving. Bartels doubled back to pick him up and was shot through the elbow, the bullet shattering bones and exiting his forearm.

Bartels and the other six surviving Americans, including a wounded Perozeni, along with a handful of supporting Nigerian soldiers, continued retreating until their trucks got stuck in mud. They exited and ran for cover in tall grass and shrubs … and waited as the enemy closed in.

Bartels had grabbed a radio and now sent out a desperate message.

“I’m like, ‘Broken arrow! Broken arrow!’” he said. “That means we’re overrun. Send everything you’ve got.”

By now, Bartels had lost a lot of blood and was fading in and out of consciousness. The others were slapping his face, trying to keep him awake. Someone tied a tourniquet around his upper arm, which probably saved his life. Hidden in the grass, the men could see ISIS fighters a couple hundred yards away, scanning the horizon, looking for them.

“Hey, man, this is like the Alamo. This is it,” Bartels said. “That’s when it got real. You’re writing letters to your family on your phone, not knowing if your text is going out. I had my pistol and someone handed me another pistol. I was ready to empty both mags and then …”

“We were not going to get taken alive.”

The next 45 minutes seemed like an eternity. Then Bartels heard a low roar in the distance.

“What is that?” he said. “I thought maybe this is it, you know, death, the long white train. Then it got louder and louder and all of a sudden, whoosh, boom! It was a French Mirage jet. It barrel-rolled right over the top of us and launched flares.”

“They started screaming,” Bartels said. “We could see them running around, dropping their guns. That saved our lives. I got to meet the pilots later. I’m like, ‘You guys have no idea. You saved our lives.’ They said that as soon as they got the broken arrow call, they took off. One guy said he never flew that low, that fast. They were on afterburners the whole time. Mach 1.5. That sonic boom was so loud.”

Bartels was transferred to Landstuhl Regional Medical Center in Germany, where doctors were able to save his left arm. Stateside, he spent three more weeks recovering at Walter Reed National Military Medical Center in Bethesda, Maryland. He has plates and screws in his elbow, still cannot fully straighten the arm and has no feeling in the pinky and index fingers of his left hand.

The ambush resulted in the largest loss of American life during combat in Africa since the 1993 “Black Hawk down” debacle in Somalia. It also ignited a political firestorm over President Trump’s treatment of the widow of La David Johnson, the lone African-American among the four killed.

Johnson had gotten separated from the unit during the chaotic firefight. Bartels saw him trying to get in another truck before being turned away by small arms fire and then running toward a Nigerian truck with two Nigerian soldiers. It was the last time Bartels saw Johnson, whose bullet-riddled body was found two days later by villagers, about a mile from the ambush site.

Trump later called Johnson’s widow to offer his condolences. Rep. Frederica Wilson (D-Florida), who was present during the call, alleged that Trump told Johnson’s widow that the soldier “knew what he signed up for” and only referred to him as “your guy,” indicating that Trump did not actually know the soldier’s name. Trump disputed Wilson’s account and the back-and-forth accusations made news for days.

Asked how he felt about the incident being politicized, Bartels took a deep breath and paused for several seconds before carefully choosing his words.

“It’s war, and I think the families understand that,” he said. “It just got politicized so fast. We were kind of used as pawns. The families just want closure. It just sucks to see what the families had to go through.”

Bartels was one of three soldiers in the Niger firefight who were recommended for the Distinguished Service Cross, the Army’s second-highest award. He said the award has since been downgraded, but he still will receive a Silver Star, a rare honor that recognizes singular acts of valor and heroism in combat.

“I’m alive,” he said. “That’s my award. You can take my award and throw it in the trash. My award is I get to breathe every day. That’s it. That’s all I need.”

Bartels once played on a Madison La Follette High School golf team that won a state title. He then enrolled at MATC (now Madison College) and spent one semester playing golf before being kicked off the team for academic reasons.

“I did the whole play-golf-but-never-go-to-class deal,” Bartels said with a laugh. “I never went to class so I ended up getting kicked off the team and put on academic suspension. So I said, ‘I’m just going to drop out.’ I joined the Army in March of 2005 and I didn’t touch a golf club again until 2013.”

Max Hosking, the 2017 State Open champion and Bartels’ caddie this week, grew up around Bartels in Madison and vouched for his talent.

“I’ve known him from junior golf at Cherokee (Country Club),” Hosking said. “I’ve seen what he’s capable of. Today was good, but that’s what I’m used to seeing. He’s always been a great ball-striker. He has 125 mph swing speed. His 2-iron is like an all-day 275 club. I was like, ‘Dude, you know how easy it is for you to shoot 72 on this course?’”

Bartels has no illusions of grandeur. He knows he’s not going to win the State Amateur, or even contend.

What he's saying is that his score matters, but it doesn't. He’s competing, without getting consumed by the competition. He’s laughing off bad shots because, well, they’re just bad shots. He’s throwing back a cold beer at the 19th hole, trading tales of birdies and bogeys with friends old and new.