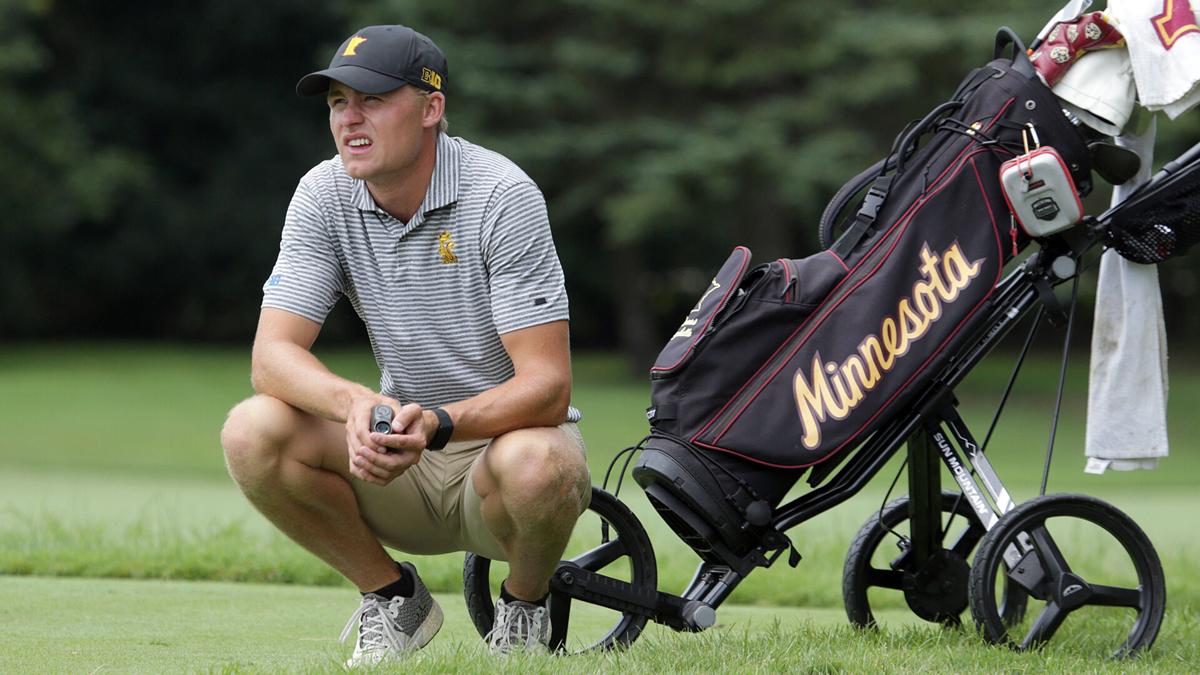 Thomas Longbella of Chippewa Falls watches the action during the second round Tuesday of the Wisconsin State Amateur at Milwaukee CC. Longbella is the leader heading into Wednesday’s third round. 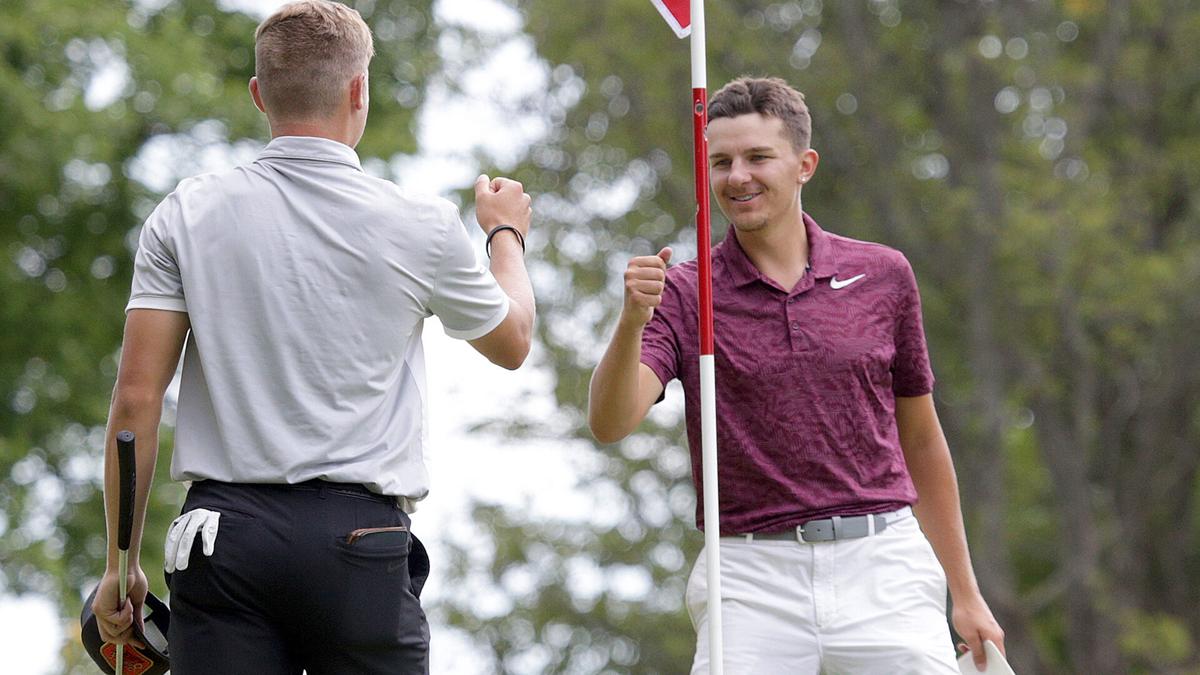 Nate Thomson, right, of Greendale shares at fist bump with playing partner Zach Place after the two competed the second round Tuesday at the Wisconsin State Am. Thomson sits in second place and Place, from Roselle, Ill., is in a tie for third. 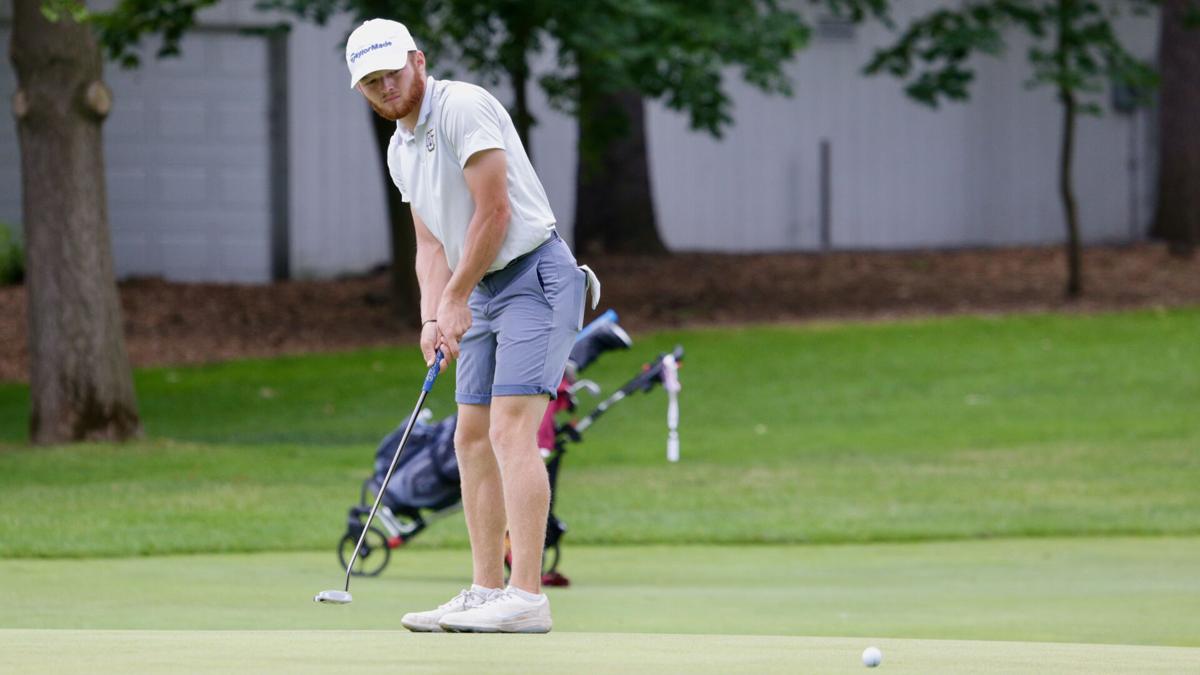 Tyler Leach, the leader after the first round of the Wisconsin State Amateur, putts on the 18th green on Tuesday at Milwaukee CC. Leach dropped to fifth place heading into Wednesday’s third round. 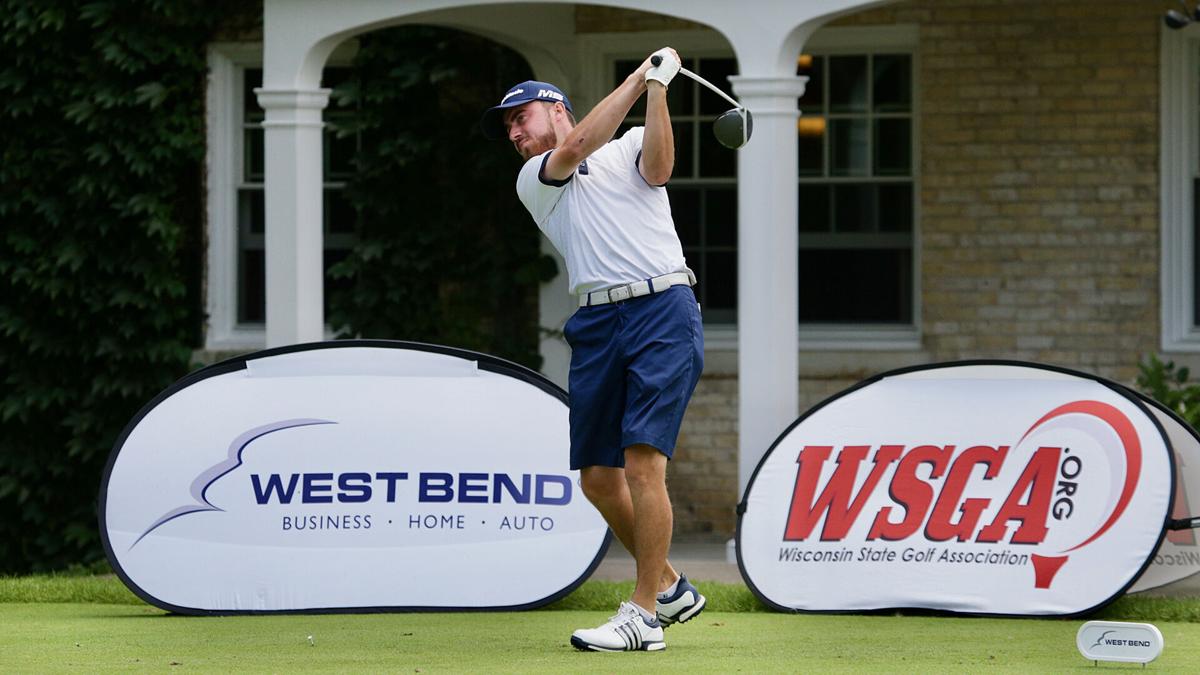 Matt Tolan of Eau Claire hits the drive to begin his second round at the 2020 Wisconsin State Amateur.

RIVER HILLS – Played on a course that demands patience and discipline and punishes impudence and bravado, the 119th Wisconsin State Amateur Championship is looking, at the halfway point, a lot like a U.S. Open.

Milwaukee Country Club, a carpet of perfection laid over a foundation of treachery, demands a golfer’s full attention for four-plus hours, especially on shots into, around and on the greens. A momentary lapse in concentration, a poor decision or a miscalculation of wind or yardage brings swift retribution.

Only three players broke par Tuesday, and after 36 holes just two in the starting field of 156 were under par for the championship, while 88 failed to break 75 in either round. The average score in the second round was 77.42, or nearly 7½ strokes over par on the nearly century-old Harry Colt-C.H. Alison masterpiece. There have been no eagles, and 14-over made the 36-hole cut.

Live updates from the Wisconsin State Amateur at Milwaukee CC

“I know, for me, I’m just kind of staying positive, honestly,” said Thomas Longbella of Chippewa Falls, who grinded out a 67 and was the leader at 4-under 136. “If I do hit it in a bad spot where I have to chip it to 15 feet, that’s what I’m going to do and I’m going to try to make those putts. I think a lot of guys get upset. As soon as you start firing at pins out here, you’re going to make big numbers.”

Longbella, headed back to the University of Minnesota for a fifth year of eligibility after the spring season was cut short by the coronavirus pandemic, made four birdies in an eight-hole stretch from No. 6 to No. 13, but the highlight of his round was spectacular par saves on the final two holes.

On the 230-yard par-3 17th, he missed the green right and was short-sided, but hit a superb flop shot to within 3 feet. On the 18th, his 7-iron from 200 yards finished well right of the green. With the pin on the far left and the green sloping away from him, he hit a good pitch some 15 feet past the hole and made the putt coming back.

“Those saves were massive,” he said. “Massive. That was honestly kind of the polar opposite of yesterday, when I was giving myself so many opportunities and the momentum was always with me. Today, I was just grinding. I did not hit my driver well. It was good to see that I can still put up a number without hitting it well.”

“In the wind yesterday, he didn’t miss a fairway,” Halla said. “Today, calm, he hit it all over the place off the tee. But he’s a very confident swinger of the golf club and he putts exceptionally well. He’s got a great disposition. He looks like he’s having fun when he’s playing. Maybe I learned something.”

If Longbella is having fun, he doesn’t have much company. Frivolity is not the first word that comes to mind at Milwaukee CC. In the second round, eight pins were just four paces from the left or right edge of the green and four more were five paces from the edge. Shades of Shinnecock Hills.

“There’s no reason to go for them, honestly,” said Nate Thomson of Greendale, who shot a 68 and trailed Longbella by one stroke at 3-under 137. “The pins are so tucked that if you miss on the wrong side, you’re definitely going to be penalized at least one stroke, if not two.

“I’ve been playing really conservative and just trying to hit the middle of greens and putt from the middle out. It’s been working really well so far.”

Longbella, a two-time State Amateur runner-up, and Thomson, a member of the University of Toledo golf team, were the only players under par for the championship.

Zach Place of Roselle, Ill., a rising sophomore at Northern Illinois University, matched Thomson’s 68 and was tied for third with Matt Tolan of Eau Claire at even-par 140. Place led a contingent of Illinois qualifiers who entered the State Amateur after the Chicago District Golf Association canceled or postponed all of its 2020 tournaments because of COVID-19.

“This course is unreal,” Place said. “It looks like a U.S. Open course. All the pins are tucked, which they should be. It’s a good test. I’m just trying to hit to the middle of the green and hopefully you make the putt. Get it in the fairway first, then get it 25 feet from the hole and see if you can make it.”

Tolan, a University of South Dakota golfer and the 2017 State Amateur champion, opened with a 69 but went backward on the front nine Tuesday with bogeys on Nos. 6, 8 and 9. He was frustrated walking to the 10th tee and credited his father and caddie, Dan Tolan, for calming him down.

“Walking off nine, my caddie told me to regroup and get a couple pars together,” Matt Tolan said. “He’s got some knowledge on the bag and knows my game. He basically calmed me down.”

He made three consecutive pars, then rolled in a 15-foot birdie putt on the 13th and followed it with a 5-footer on No. 14 and a 7-footer on No. 15. The little run put him back in a good frame of mind and he finished with a 71, despite a bogey on the long par-3 17th.

Tyler Leach of Spring Valley, the first-round leader with a 67, made a pair of double-bogeys en route to a 74 and was alone in fifth place at 1-over 141. The Marquette University golfer said he hit the ball well, but got a bad break or two and misjudged the wind on a couple of shots.

“I actually played better than I did yesterday,” he said. “If I play this well tomorrow, I’ll be fine.”

The third round promises to be interesting. Bill Linneman, director of rules and competitions for the Wisconsin State Golf Association, set up the course so that the ninth hole will play as a 270-yard, drivable par-4, and the 17th will be a 268-yard, uphill par-3.

As for Longbella, his game plan is simple: wash, rinse, repeat.

“I’m going to try to keep doing the same thing,” he said. “That’s the goal. Get the driver straightened out for tomorrow, hit some more fairways. I’m just thinking about playing the golf course and just plodding my way around it.”