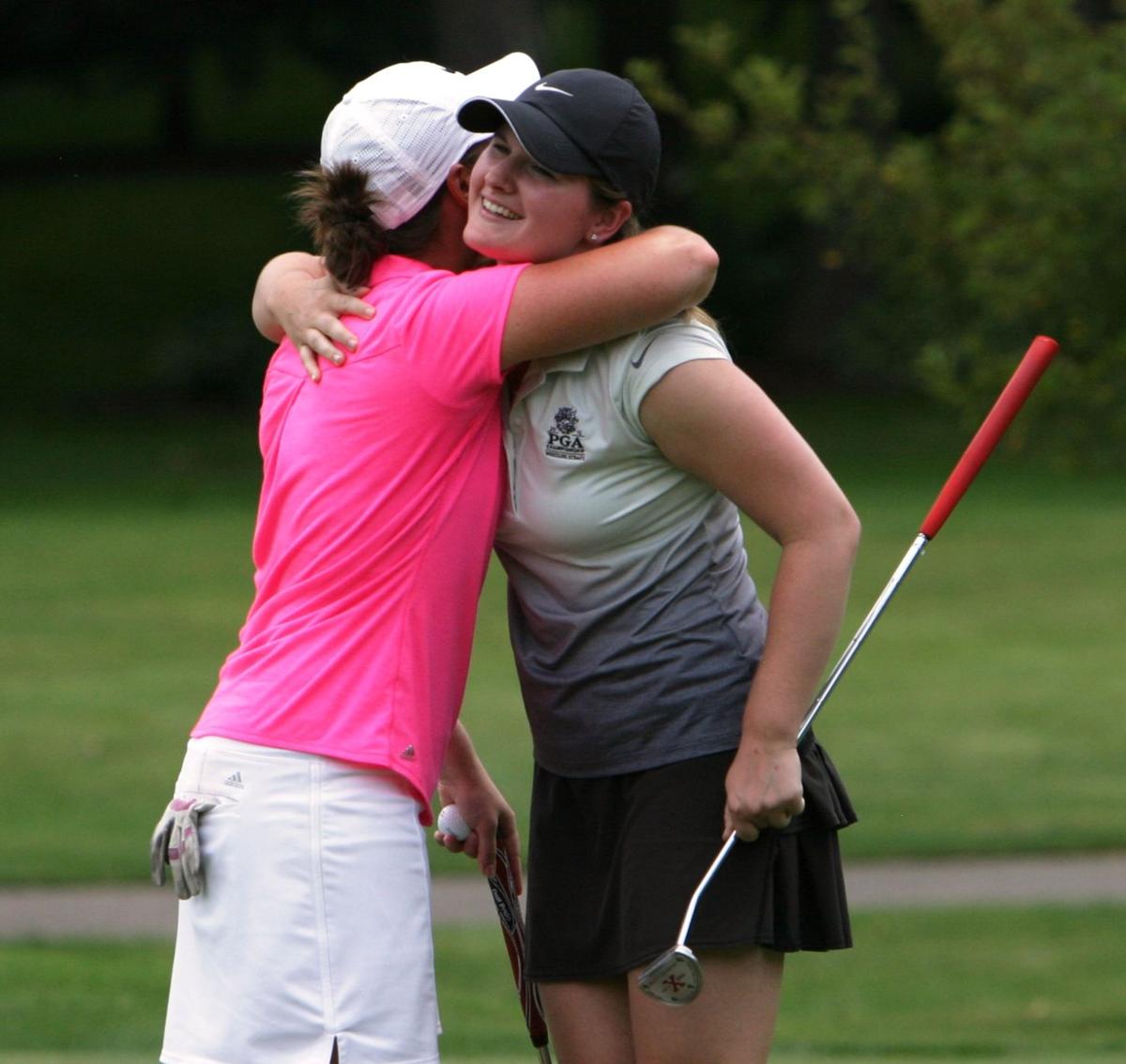 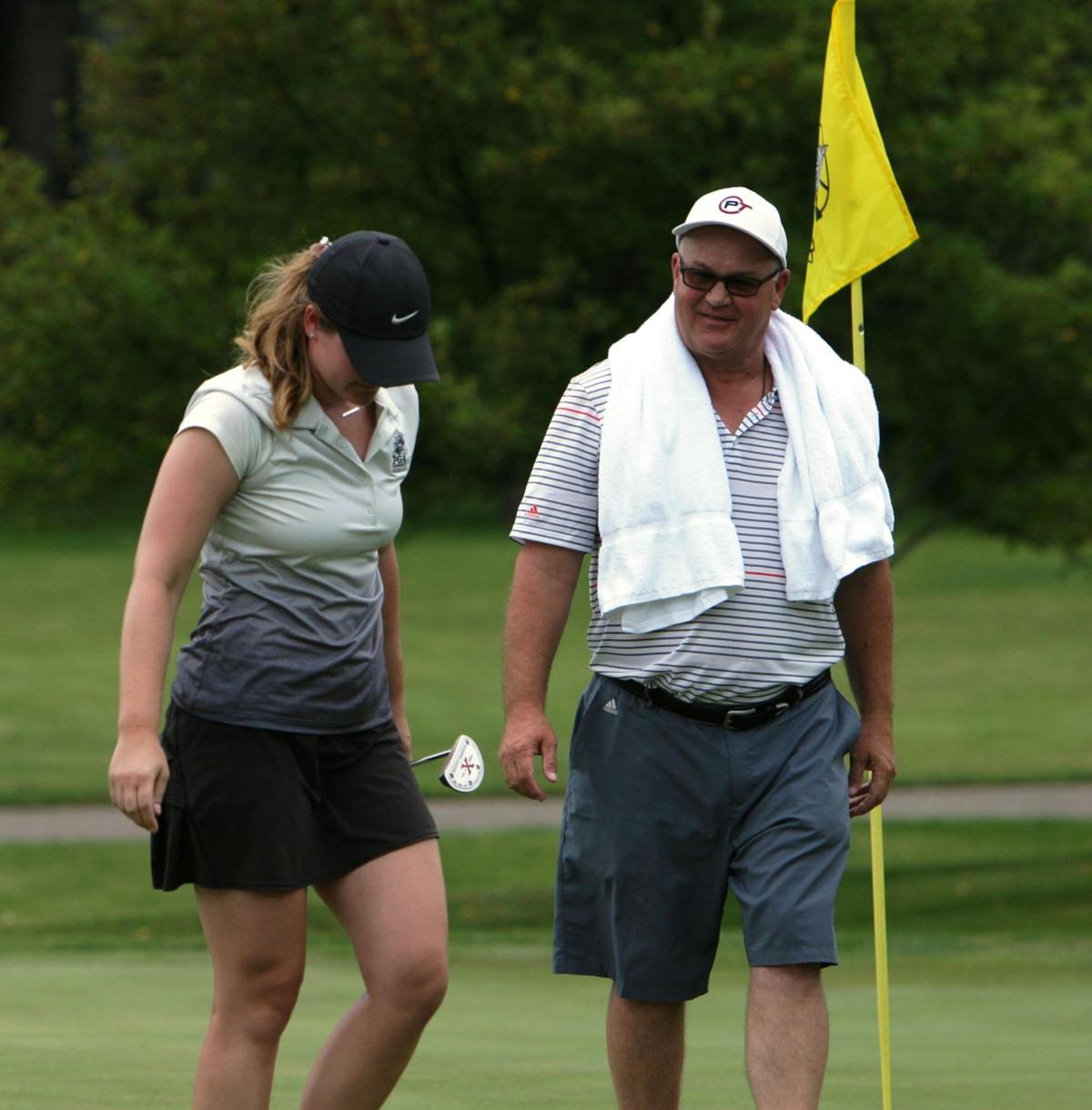 After making a mess of the 18th hole during the regulation Wednesday, former Ball State golfer Mary Welch knew she had to atone quickly on the first playoff hole against Marci Dubler at the Madison Women's City Tournament.

Credit her caddie/father Mooker Welch for putting a sense of urgency in Welch. He rolled his eyes when it was announced the playoff would continue across Highway M at Bishops Bay CC on Nos. 2, 3, 4 and beyond if it wasn't decided on the clubhouse side of the road at No. 1, joking with anyone who would listen that he'd already worked "past my contract."

Welch took care of business, taking three putts from the back fringe on the par-4 first hole to win with a bogey 5 over Dubler, the former Illinois State golfer who pulled her drive into a pond and couldn't get up-and-down for a matching bogey after her approach shot ran through the green.

Dubler had erased a two-stroke deficit on the 18th hole with an up-and-down par from behind that green after Welch had pulled her approach in a greenside bunker. Welch left her next shot short of the fringe, chipped short and two-putted for a double-bogey 6, sending the tournament to extra holes for the second year in a row.

"I was really not happy with how 18 went so I was glad to be able to come back and, at least, finish relatively strong and pull off the win," Welch said after securing the Richard Welch Trophy — named in memory of her grandfather, a big supporter of the tournament — for the first time since 2014, when she won a one-day shootout for the trophy at Maple Bluff CC.

"I used the right club (on No. 18), I felt like. But I kind of turned on it and pulled it a little. I'd been hitting a fade all day; that was usually my miss. It went left in the left bunker and couldn't get up-and-down. It was rough."

It was the same story for Dubler on the tee to start the playoff. She had birdied the hole to start her round and felt comfortable over her drive.

"I hit a better tee shot (in regulation), I put myself to about 80 yards and stuck it to about a foot and made the putt," Dubler said. "So in the back of my head I'm thinking 'Play it the way you did this morning' and I just swung a little quick and pulled it into the water."

If the playoff hole finished a rewarding day's work for Welch, her poise in the middle of her round put her in position to celebrate. She hit her tee shot out-of-bounds on No. 12, made bogey off her provisional and then rattled off five pars in a row before her bunker problems on No. 18 opened the door for Dubler.

"It was important I stayed as low as I could on that hole where I hit my tee shot out-of-bounds," Welch said of No. 12. "I knew it was a bad mistake. I was happy I was able to get away with bogey. It's easy to get down on yourself when you make a stupid mistake like that. But I stayed on top of it, bogeyed, and made sure to stay strong my next few holes and do the best I can."

For Welch, now 24, the City Tournament will be her only competitive event of the summer. She works as an assurance associate at RSM in Madison and is studying to take her CPA exam later this year.

"It's a big deal," Welch said. "I think it's a good tournament and it means a lot to me that my grandpa's name is on the trophy and a lot of my family has played in it. It's good to be a part of that."