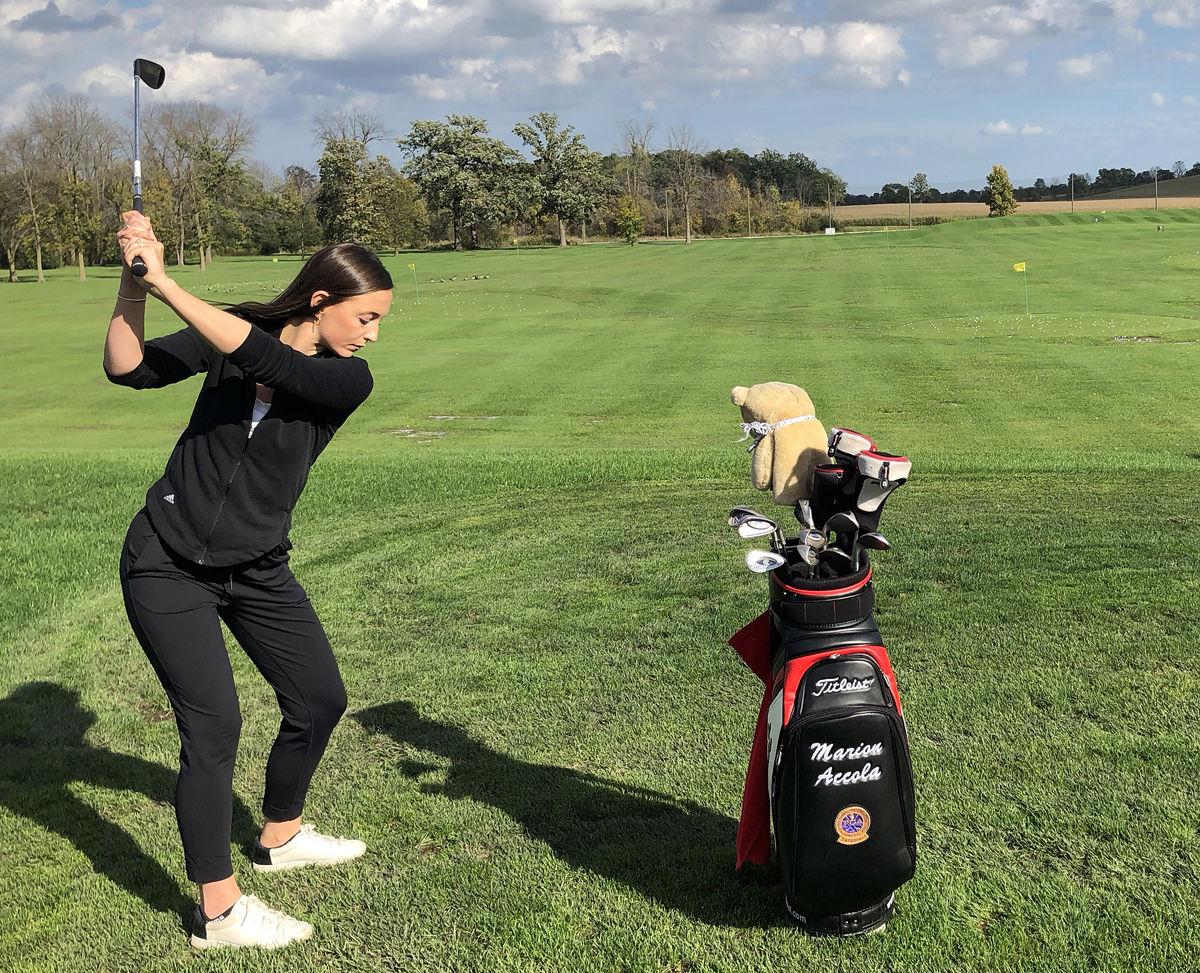 Marion Accola demonstrates her swing at Moorland Road Golf Center. Accola works there as a teaching professional and also works as a features producer at Golf Channel. 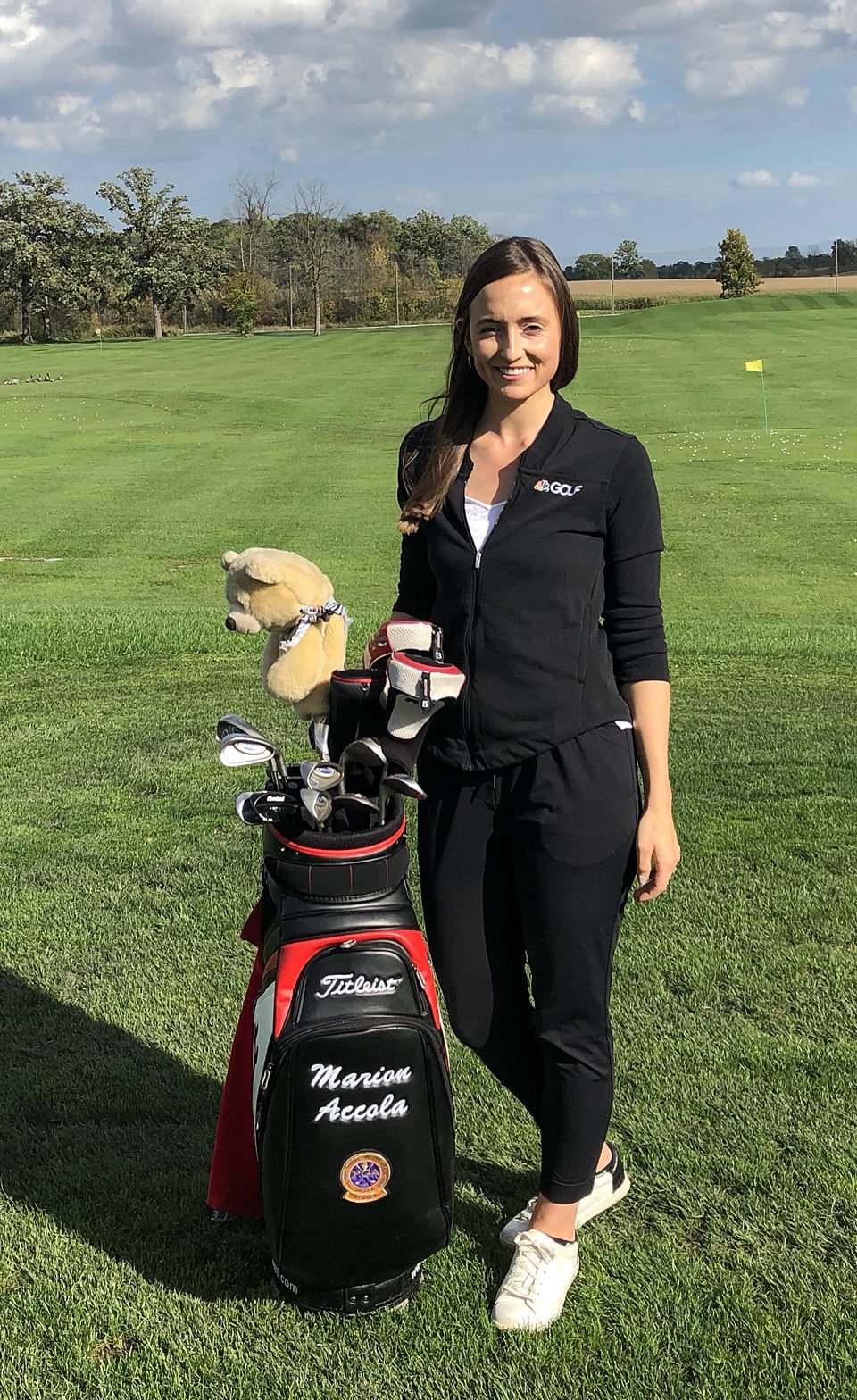 NEW BERLIN — Marion Accola always knew where she was going and how to get there fast. Of course, it’s easier to take the path of least resistance when you’re smart, talented, focused and driven.

Not to make you feel like a slug, but Accola went through the Professional Golfers Association teaching program while she was at the University of Wisconsin, interned at Milwaukee television station WTMJ, graduated a semester early with a business degree and within weeks was working at Golf Channel. By the time she was 22, she also was a Class A PGA professional.

Now 27, the Waukesha Catholic Memorial High School graduate works about 25 tournaments a year as a features producer for Golf Channel and when she’s not on the road gives lessons at Moorland Road Golf Center, which is co-owned by her father, John Accola.

So, when does she catch her breath?

“I think having a support system at home is really important because sometimes I’ll have six weeks in a row in the heart of summer where it’s go, go, go,” Accola said. “But I like having the balance of coming home and teaching because it complements what I do with Golf Channel and NBC. I can use my knowledge from each to help the other.”

Accola was an accomplished golfer at Catholic Memorial and the player of the year in the Classic 8 Conference but never saw herself pursuing a playing career. She didn’t attempt to make the women’s golf team at Wisconsin, choosing instead to focus on her studies and the PGA program.

“I knew long-term I wanted to do something else besides playing golf,” she said. “I think the road to the LPGA tour is such a hard road and I wanted to do other things and be a little more well-rounded. So, I knew from an early age that I didn’t want to just be isolated on the course like that (as a player).”

Her internship at WTMJ and her golf connections helped her land a job as a statistician at Golf Channel in Orlando. Her first assignment was the Arnold Palmer Invitational, three months after graduating UW.

“I was young and female in a heavily dominated male sports industry, but I think because I have a unique background I was able to get a little more respect than if I just came out of college not knowing much about golf,” Accola said. “Some people would hand (the announcers) a stat and they’d think, ‘I can’t use this.’ I handed them things they could actually use.”

Within two years, she was writing teaser scripts and picking accompanying music, working with editors to pull together shots for feature pieces and overseeing the tape room.

Accola typically arrives on site a couple days before the tournament starts and interviews players for potential feature pieces. She also puts together features on the city or surrounding area and produces the teaser.

Once the tournament starts, she assembles highlight packages, pulling together shots from the previous day’s coverage and concentrating on the leaders. So, for instance, if a player rolls in a 40-foot eagle putt on Friday and faces a similar putt on the same hole Saturday, the announcer can make the comparison and show the previous day’s putt.

It’s a high-pressure job done at a dizzying pace, with no room for error.

“When you watch golf on TV, it’s so quiet, you hear the birds chirping, the calm announcing,” Accola said. “But in the TV truck it’s organized chaos at its finest. So much intensity. And I think that’s one of the reasons I was drawn to it. I always loved the intensity of playing. It’s a similar feeling, to me, when you have to get something together right away and hope it’s perfect for when it airs.”

Accola has interviewed the late Arnold Palmer (“His charisma, there’s nothing like it”), chatted with Presidents Clinton and Trump and worn out a passport working in such exotic locales as Rio de Janeiro (the 2016 Olympic Games), France (the LPGA’s Evian Championship), Scotland (British Opens at Royal Troon and Carnoustie) and Japan (a PGA Tour Champions event).

At home, her schedule is nearly as hectic but manageable because she has more control and can build in off time between lessons. She teaches mostly beginners and intermediate players.

“It’s funny, last week I had a 4-year-old little girl I’m teaching and then in the next hour I had a man who is in his 90s – which is incredible, if you think about it,” she said. “Any other sport, you can’t do that.”

Her teaching philosophy is to work with a player’s natural movements and to strengthen what he or she does best. She considers video an important tool but usually stays away from TrackMan because “I don’t think a beginning golfer needs to be caught up in those numbers.”

“I’m actually against molding someone to one specific swing,” she said. “I don’t see that as effective or realistic. I believe you’ve got to work with people’s natural body motions and accommodate any injuries and then strengthen those moves to make them more successful vs. trying to get somebody in a certain position all the time, because it’s not going to be effective. No two people are built the same, so how they could all be in the same swing, it’s silly.”

Accola has figured out a way to balance her dual careers. She loves being able to tap into her creativity as a features producer and enjoys the challenge of helping novice golfers get more enjoyment from the game. She likes to travel and explore other cultures but finds comfort at home, in the familiar surroundings at the Moorland Road Golf Center.

“I’ve done things I never thought I would do,” she said. “I can see myself doing this for a long time.”