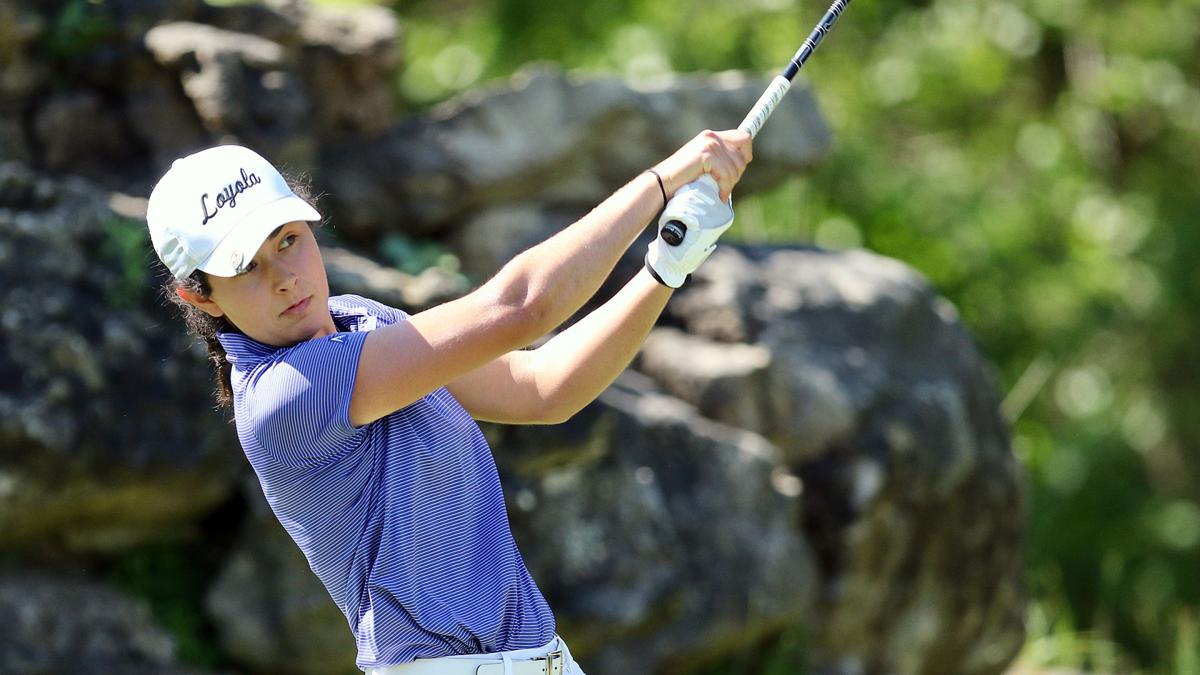 Lorenza Martinez hits her opening drive during the final round of the Wisconsin State Women’s Open played last week at The Legend at Brandybrook in Wales. 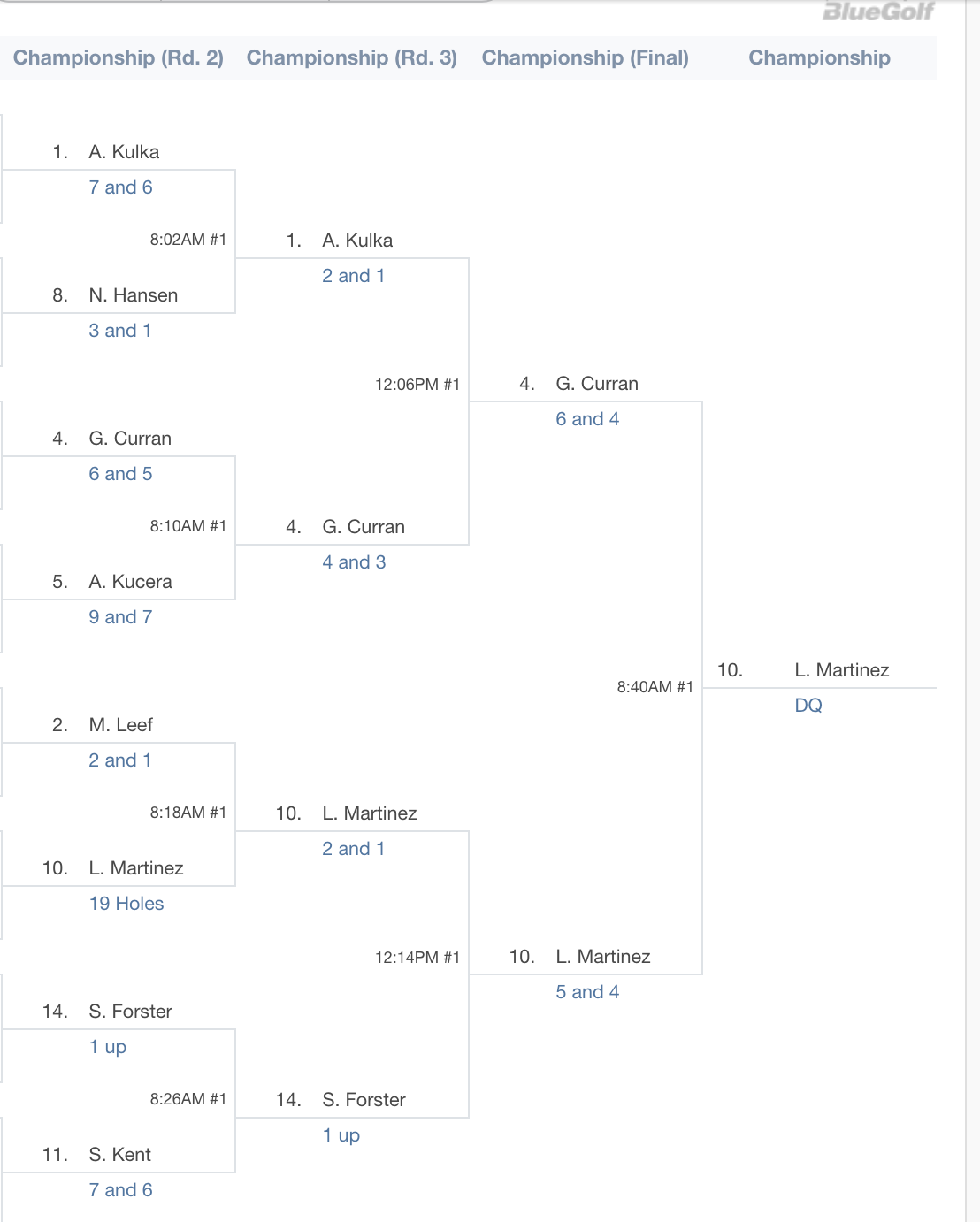 Lorenza Martinez's proficiency as a match-play closer had become stronger and stronger the further she advanced into the championship-flight bracket at the WSGA Women's State Match Play Championship this week in Cedarburg.

But the Menomonee Falls golfer never expected to have an eligibility issue close the curtain on the 2020 tournament with her declared the winner, just about 12 hours before the championship match at Hidden Glen Golf Club.

Martinez learned shortly after 8 p.m. Tuesday she would not be playing Grace Curran of New Lenox, Ill., in Wednesday morning's championship match as scheduled after WSGA officials learned that Curran had competed in (and won) the Minnesota Golf Association Women's Match Play Championship a week ago. WSGA rules allow for out-of-state golfers to compete in its events provided they join the WSGA and agree not to compete in the corresponding tournament in another state, which Curran — a University of Minnesota golfer  — violated by teeing it up at The Wilds Golf Club in Prior Lake, Minn.

Bill Linneman, the director of rules and competitions for the WSGA who spoke to the topic of out-of-state golfers competing in qualifiers for the WSGA men's state match play last week in an interview with Wisconsin.Golf, confirmed that the same rules apply to women's events, which the WSGA began managing this year. According to Linneman, the eligibility requirement for the women's match-play championship read: "Entries are open to all female amateur golfers who are current members of the WSGA, are residents of Wisconsin and/or affiliated with a WSGA member club. Non-resident members must agree not to participate in any other states' major amateur championships."

"As a non-resident, she agreed not to participate in another state's major amateur championship, which she obviously did not do," Linneman wrote Tuesday evening in a text message to Wisconsin.Golf. "It's unfortunate, but can you imagine the blowback we would get if we did not take action AFTER finding out she violated our eligibility requirement?"

The decision came as a shock to Martinez, a Loyola (Ill.) golfer who held off Pewaukee's Maggie Leef 2-and-1 in the quarterfinals thanks to a birdie-birdie stretch on the back nine before dispatching Wauwatosa's Sami Forster 5-and-4 in the semifinals.

A few hours earlier, Martinez told Wisconsin.Golf that she was excited to play Curran, who led the Gophers in scoring (74.67) in three tournaments this spring before COVID-19 canceled the balance of the schedule. For the 2020-21 season, Curran ranked fourth on the team with a 76.20 average.

After eliminating Xavier University golfer Amy Kucera, another Illinois golfer whose family is spending time at their summer home in Fontana, with a 4-and-3 decision in the quarterfinals, Curran dealt UW-Green Bay golfer Ashley Kulka of Beaver Dam a 6-and-4 setback in the semifinals. Kulka, who had squared the match after four holes, lost three of the next four to fall 3-down by the turn and then bogeyed four straight holes starting at No. 11 to end it.

"I asked if I could play Ashley and (the WSGA) said all the girls that Grace beat would have to compete for her place, which I guess they said wouldn’t be practical now that it’s so late," Martinez wrote via text to Wisconsin.Golf. "I’m disappointed. I was ready to play (in the finals) and this is definitely not how I would have wanted to win. But there’s not really anything I can do."

Indeed, Martinez did all she could do just to reach the title match.

Her wild ride through the bracket began in the first round when she rallied from 5-down after 12 holes to oust WSGA Hall of Famer (Syd Wells) in a 19-hole marathon. She played her final seven holes in that match 3-under-par.

In the quarterfinals, Martinez took a 2-up lead on Leef at the turn only to watch the WSGA Hall of Famer birdie No. 10 and par No. 11 to square the match. Martinez responded with back-to-back birds to go 2-up after 13. Three pars later, the match ended after both golfers bogeyed the par-3 17th hole.

"I made more committed swings and decisive putts on those holes, which is what helped me win that match in addition to my second match (Tuesday) morning," wrote Martinez, who lost 2-and-1 in the 2019 semifinals to eventual champion Sarah Busey of Racine. "I never really felt like I lost momentum in Maggie's match even though we were all-square at 12. I have a tendency to accelerate my routine when I have makable birdie putts, but I really took my time on those two (on Nos. 12 and 13)."